Winning the Aztec Invitational came as a surprise for O’Rye Franklin. 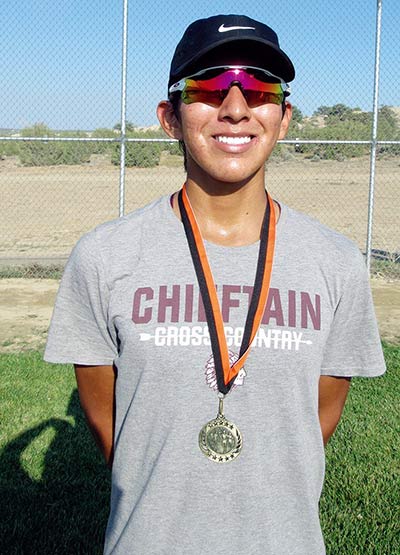 His coaches, however, had a different take on what the Shiprock harrier is capable of doing as Franklin won the 5K race in 17 minutes, 50.48 seconds.

“He’s the most consistent runner on our team,” first-year coach Herbert Beyale III said of his pupil. “This is his senior year and he’s definitely looking forward to it. It’s exciting to see him do extremely well for our first race of the year.”

“When he came out for the first day of practice you could tell that he’s been training all summer,” she said, “so I’m not surprised at his finish at all. We knew he was going to be our top runner.”

On the Aztec course, Franklin took the lead for good at the 1.25-mile mark, winning the meet by a 54-second margin.

“This is pretty surreal to be honest with you,” Franklin said of his win.

The Chieftain senior said his pace on Friday was on par with what his coaches wanted him to run.

“It was a good pace, not too hard and not too fast,” he said. “I started off smooth but after that second loop it was kind of hard to tell if I was going too fast or too slow.”

Nonetheless, his pace allowed him to gain some distant between him and Navajo Prep’s Devin Roper. Roper finished second in 18:44.30.

In addition to Franklin, the Chieftains landed another runner in the top 10 with junior Logan Pioche taking seventh.

“We had a good pack time between our second, third and fourth runner,” Beyale said as the three runners were separated by 22 seconds.

“They all ran well and I thought that Nevaughn Begay and Adam Phillips ran as teammates today,” she said. “That’s probably the smartest I ever seen teammates ever run together like that. It’s nice to see teammates working together instead of racing against each other. I think they had a good race.”

Navajo Prep, meanwhile, had Roper and junior Aaron Mike finish in the lead pack with second and fourth place finish.