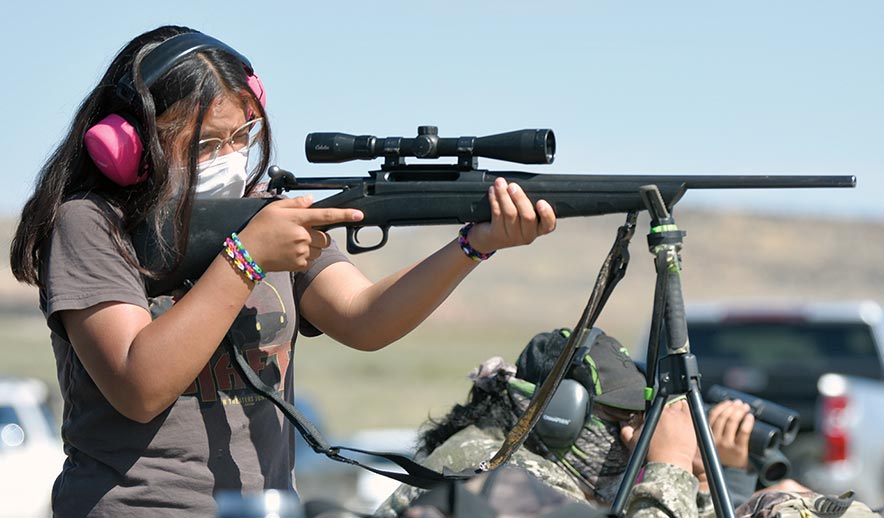 Navajo Times | Donovan Quintero
Talen K. Becenti, 13, from Crownpoint focuses on her target through a scope while practicing how to shoot a high-powered rifle in Gallup on Aug. 28.

Talen K. Becenti, 13, takes a breath and aims her rifle.

Her father, a Marine Corps veteran whose name is spelled the same as his daughter’s, watches the teen from Crownpoint from a few feet back. Both are fixed on the target, which is 100 yards away.

Becenti, wielding a large, high-powered rifle, which she said sort of intimidated her, pulls the trigger, and a loud boom echoes at the firing range in west Gallup.

The boom creates recoil, which she absorbs with her shoulder. Her shot is dead on and connects with the round steel target, which is about the size of a large dinner plate.

She shoots the target five times then walks to inspect it with her mentor, Gloria Tom, department manager for the Navajo Department of Fish and Wildlife.

Tom down where she placed her shots.

Becenti and other Navajo youth are participating in the 2021 annual youth hunt sponsored by the department. It will take place in the Chuska Mountains this hunting season.

The purpose of this project, Tom said, is to introduce Navajo youth who don’t have the opportunity to learn how to hunt at home.

“An example is a youngster wants to learn to hunt but the grandfather’s unable to teach him,” she said. “We’ve had youngsters who were orphaned, where they lost their parents, or dad has left a family.

“And so they don’t have some that support at home,” she said. “This project is for those youth who want to learn to hunt.”

To get accepted, Becenti and other youth had to write a one-page essay explaining why they wanted to learn to hunt and describe their interest in hunting and fishing.

In her essay, the Becenti wrote that she wanted to learn to hunt like her cousin sister, who her father taught. Becenti’s father, she said, taught her more about marksmanship.

“I like to be professionally trained in hunting,” she wrote in her essay. “I like to learn the safety rules of hunting and how hunting works.”

As part of requirements, the youth, all between the ages of 12 and 16, went to a shooting range in Gallup to learn how to shoot the high-powered rifles they’d be using to hunt deer.

Becenti teamed up with Tom, who taught her where to aim and shoot. After shooting the target, they looked to see where she had hit.

“When you see the deer’s front leg, it has an elbow, it’s usually in this area, that’s where you want to aim or just above it depending on the elbow,” Tom told Becenti.

Kevin Gleason, wildlife law enforcement manager at the department, who was mentoring another youth, chimed in and said aiming her weapon is key to successfully hitting her target, even from long distance.

“I wouldn’t recommend my youth hunter shooting at a deer at two hundred yards,” Tom, said, explaining that most hunts occur in less than 50 yards.

Tom added that she wouldn’t recommend inexperienced youth try and shoot a deer from 200 yards because they might not immediately take it down and injure it instead.

“When we’re mentoring them we teach them what we know about hunting, and a lot of us here are professional wildlife managers,” Tom said. “And so we incorporate a lot of ethical and wildlife management principles into them.”

After a breakdown of her performance, Becenti and Tom prepared to shoot at a target almost 200 yards away.

This time, the instructor gave her the option to lie down, sit or stand. They also would take turns shooting at a steel target shaped like a deer.

Before getting to this point with the high-powered rifles, Tom said the youngsters had a chance to learn how to shoot with .22 caliber rifles two weeks ago.

Becenti, she added, excelled then but struggled this time around.

Tom said the jitters might have come from knowing she’d be working with a more powerful weapon.

“Now they know what it feels like to shoot that big gun,” Tom said. “Now we’re trying to focus on hitting the target.”

For Becenti, she said she noticed the difference between a .22 rifle and a stronger one.

“That one was OK,” Becenti said. “I got all my shots in the red area.

“That was better than this one,” she said, explaining how she did with the .22 caliber. “This one, I was pretty nervous because of the kick of the rifle. So it took a while to shoot.”

Despite Becenti not doing as well as before, Tom said girls seem to be a better shot than boys.

“Over the years, we’ve seen the better marksman with the female hunters,” Tom said. “I don’t know why. I just think that maybe a lot of it has to do with patience.

“With the guys is it’s more kind of like an ego thing in some respects and a lot of these young gentlemen here are, they’re just transitioning into that adulthood,” Tom said. “And so there’s a lot of stuff going on, egotistically and psychologically, so I think a lot of that might have to do with it.”

This year’s youth hunt will be based at Camp Asaayi, assuming the number of COVID-19 cases doesn’t continue to rise.

The annual youth hunt was canceled last year because of the pandemic.

This year, Tom said they hope the COVID-19 numbers don’t rise but if they do, then the camping experience part of the hunt most likely won’t occur. Instead, the youth hunters would work individually with their mentors who’d take them hunting.

The youth hunt traditionally hosted 15 youth. This year, Tom said they whittled it down to 10 because of the pandemic. However, one youth backed out, so they’re down to nine.

What’s important to Tom is instilling into the next generation the inspiration to return home and take over the department as mangers and officers.

“What is really neat is that we plant a seed in some of these youngsters’ minds about being a wildlife biologist, being a manager,” Tom said. “To me that is a huge success marker for this project. And a lot of them have expressed interest in working in the environment.”

For young girls who are curious about learning to hunt but might be afraid of guns, Becenti said, “Well, it’s not as bad as it seems. Like once you shoot it, you’ll realize that it’s not really that bad. And you’ll start getting used to it the more you try.”