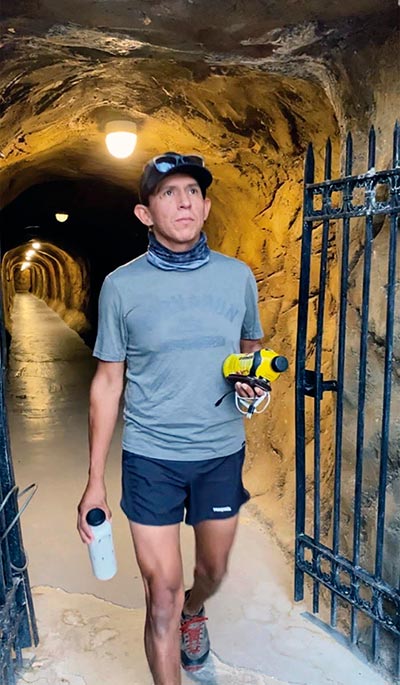 Neztsosie was born and raised “old fashioned,” living a traditional life style that included a lot of running.

“For me, running was a part of life, not something that was a sport, but as is something that I did every single day as a kid, growing up on the reservation,” he said. “You have cattle, you have sheep, you have horses, you know you live well, especially out on Navajo Mountain, way out in the middle of nowhere. So, walking and running was always a form of transportation to get from one point to another.”

Badwater is considered one of the toughest races in the world. From July 11-13, runners will have to race through the California desert in Death Valley, over three mountain ranges and all the while contending with the differing elevations and temperatures as high as 120 Fahrenheit.

Only experienced runners who run in 100-mile races are apart of the qualifications.

Neztsosie met the requirements, submitted his name and won entry to be one of 100 participants worldwide to run in this year’s race.

Neztsosie is an advent runner and was excited when he got the opportunity to run in a renowned race.

He got a team together and headed out to the course. Neztsosie was determined to cross the finish line and possibly win a silver buckle, a prize only the top finishers will receive.

There was some nervousness as Neztsosie was more used to running on his own without a team and in smaller races. He was also more accustomed to trail runner and not the road the runners used for the race.

The race began on July 11 at night around 9 pm when the temperature was just ten degrees cooler, but still over a hundred.

The next day, Neztsosie said he was doing well for the first 30 miles, but then his body started reacting negatively. He had trouble eating and without nutrients, his body started to cramp.

The race last week wasn’t Neztsosie first ultramarathon, but it was his first race in 120-degree heat at low elevation. He didn’t make it to the first 50-mile mark in time and was cut out of the rest of the race.

“In my case I was burning probably like 500 to 600 of calories every hour but I was only taking in like 200 calories, so that’s where that whole issue started to arise from like halfway through the race.,” he said. “And then the cutoff time was at mile 50 at I think 10 o’clock … by the time I finally, you know, started getting food back in me, I got back on my feet. I couldn’t make the cut off time (and) eight miles in one hour was way too quick of a pace for me to make.”

Although he didn’t perform as well as he believed he could have, he said it was still an experience to remember. Further, the loss taught him more about himself and what it means to race in such brutal conditions. He’s learned hard lessons that he knows he will fix the next time he runs. He plans to attempt the Badwater 135 again sometime in the future.

Neztsosie comes from a remote home on Navajo Mountain, on the Arizona side. There he said the Navajo tradition is very much alive as they live in a lifestyle similar to their great grandparents.

They herd their animals, horses and sheep, all over the mountainside, using horses instead of ATVs or by running alongside them. Running for Neztsosie isn’t a sport but a way of life. It holds deep meaning for him, especially coming from the Navajo culture where running is a fundamental.

“So running wasn’t something too new to me,” Neztsosie said. “So, when I got into running I was like, ‘Hey, you know what, this is simple. All I had to do is walk fast.’ And there’s a whole lot of people along the course that were willing to feed you, give you water, but when you’re ranching, especially at the end of the mountain and being so isolated, you’d have to commit 110% every single time because, you know, oftentimes you have animals to care for.

“You have your sheep, you have cattle, you have your horse, you have your dog, you have to takes care of your fellow cowboy, so you really had to have put in that extra effort and a lot of times you’re not getting any help, so eventually when I got into racing, I was like ‘whoa, this is actually pretty simple.’”

Running has taught him many lessons in life as well, one of the recent ones being how to respond to failure. Although hard, the experience often teaches him the most and helps him to improve.

“Failure always taught me the most,” he said. “That’s where I learned the most amount of wisdom, knowledge, maybe even courage when taking that next step, whether you knew you’re going to fail or not.”