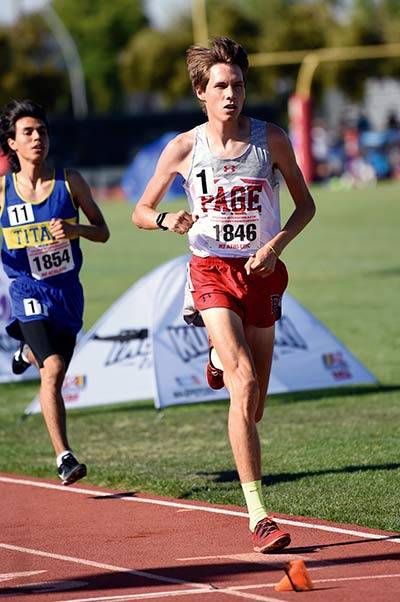 Page’s Bowen Martin reaches his final lap of the 1600-meter race at the Arizona Division III state track meet on Saturday in Mesa, Arizona. Martin repeated as champion with a winning time of 4:24.24.

In last Saturday’s race, the Sand Devils repeated as state champions as the race came down to a fraction of a second with Page senior Bowen Martin overcoming Ryan Kay, the anchor runner from Snowflake.

“You always have to have confidence in your kids but I definitely didn’t expect the race to be that close,” Edwards said. “We knew Snowflake ran their seeded time at altitude so we figured man-for-man we could handle them. We didn’t expect their anchor leg to run like that.”

The Page team, which also consists of sophomore Trent Holiday and seniors Morgan Fowler and Kaipo Uejo, led the race from the first leg and steadily increased that margin. But with 300 meters left the Snowflake runner made a move on Martin. And with 180 meters to go, he passed the Page runner.

“He passed Bo but it really didn’t gas him,” Edwards said. “Bo came back on him and down the stretch it was back-and-forth. That was most exciting race I saw on Saturday.”

In the individual races, Martin captured his second consecutive gold medal in the 1,600-meter run with a winning time of 4:24.24 on Friday, edging Palo Verde Magnet sophomore Abraham Valenzuela, who was clocked in at 4:25.29.

“I was trying to go out quick because I wanted to get a fast time,” Martin said. “I tapered off the last two laps but it still turned out good for me.”

Martin said it was a daunting task to repeat as champion since everyone in the field wanted a shot at him.
\
“The pressure is always there because you have to work harder than the year before,” he said. “There is going to be guys who want to beat you.”

On Saturday, Martin was looking to defend his 3,200-meter crown but Valenzuela built a gap to win the title in 9:20.27 with the Page runner trailing almost 16 seconds back.

“That guy only ran two races during the state meet and Bo had more mileage on his legs than that kid,” Edwards said.

The Page coach said his pupil is going to forgo this week’s Meet of Champions, which is scheduled for Saturday at the Joe Sellah Track facility on the Arizona State University campus.
“His heart wasn’t into it so he’s not going to participate,” Edwards said of the invitational-only meet that takes the top state placers across four divisions. “As a coach I watched him grow up and I wish him the best at the next level.”