Page XC star takes Goldilocks approach when choosing college: ‘Not too hard or too easy’ 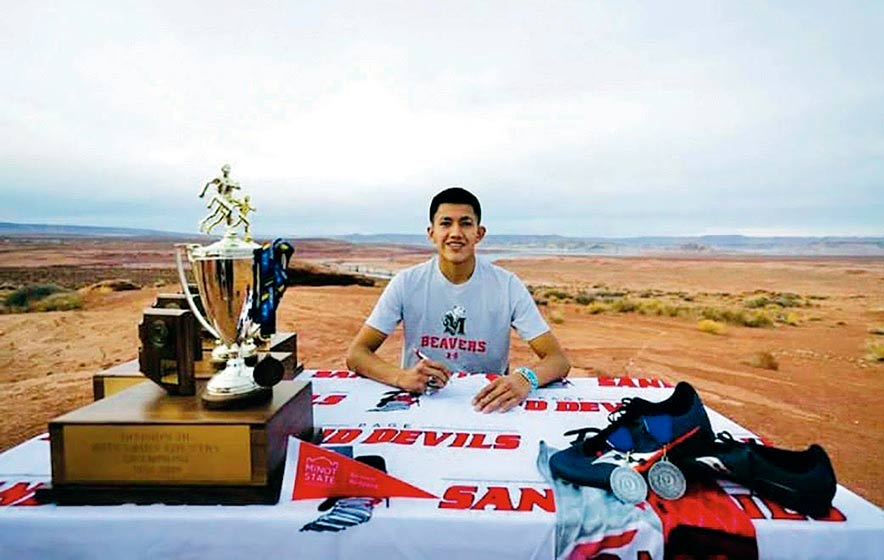 Ever since he first started at Page High School, Trent Holiday has been an athletic sensation: a year round athlete who played basketball, track & field and cross-country.

Holiday will be taking his talent to Minot State University in North Dakota, where he has signed on to run both cross country and track & field.

Through all four years he has been a top runner for Division III. He competed at the Nike National Regionals Southwest Championships for two years, was named Runner of the Year for 2019 and gained numerous other awards throughout his four years.

Despite the interruption of the COVID-19 pandemic in the world of sports, Holiday still scored achievements for the year 2020. He ran at the Boston Marathon, was named one of the Top 5 Runners for Arizona Division III and is now a five-time state championship title holder for cross country and track. He is also the holder of new records he set at Page High for track & field.

These achievements and more made him a prime candidate for many colleges, but ultimately he chose Minot State University.

“In my high school years,” Trent said, “my main goal was to get onto a team and compete at the collegiate level. Yes there has been college coaches from Division I, II III from different schools, but I wanted to go somewhere where I can excel in, and somewhere that wasn’t too hard for me or too easy for me, and at the Minot State University in North Dakota I thought it would be a good opportunity to show my skills at the next level and participate in cross country and track.”

Trent was invited to visit the school and got to personally meet his future coach, teachers and tour of the campus and its dorms.

“I was happy and grateful that I got a chance to go down there because not many schools offered me what that coach did,” Trent said.

After many years of careful contemplation on what he wants to be, Trent said he’s going to study criminal justice and hopefully be able to work in the field of law enforcement. All the while he’ll be running for the university’s track and cross-country teams.

“With this being Division II, for me I want to be the best runner I can be for the season of 2021 as a freshman as well going into college,” Trent said. “My goal is to stay in school and do my sports as well and to make my family happy and my Navajo country as well.”

The 2020 year wasn’t the big sendoff he wanted for his senior year, but it was still a memorable one.

“I’m going to be honest, I wanted to win,” Trent admitted. “I wanted another title, but life goes on and I’m so happy that my teammates had some fun at the state cross-country meet and I think if we are practicing together, train together, and stayed in the same crowd together as we usually do we would have come out with a win instead of the plaque, but that is how life goes and we move on. But hopefully for next year I know my team is going to come out stronger again.”

As for his family, they couldn’t be prouder as stated by his father Alvin Holiday.

“As a dad, I’m very proud for his accomplishment,” Alvin said. “I always kind of knew he was going to do something great. He always has been an extraordinary athlete when he was growing up.

“When he was going after the sheep, after his grandma’s sheep, running up the mesa everyday, outrunning all of his siblings and myself, I would look at him like that because I knew he was going to be something great.”

According to his parents, Trent’s running career began back when he would herd his grandparents’ sheep early in the morning. His grandparents, and parents would instill the Navajo culture, beliefs and way of life into Trent, helping to guide and inspire him to reach his goals, as said by his mother, Paulette Holiday.

“We started encouraging him even more,” Paulette said. “And along the way before he even joined cross country, we taught the kids to value the Navajo tradition of getting up and running in the morning before the sun rises and pray to the holy spirit for yourself and for your family and for your wellbeing, and we really embedded that in his head.”

The values and traditional beliefs, as well as the wisdom that his grandparents shared with him, have impacted Trent’s life.

“It would be my grandparents [who inspired me],” Trent said. “The reason why is because they never went to school, they never read books or speak English, they only knew Navajo, but they wanted me to continue with my schooling, my academics and to continue with sports because they’d say ‘The world is changing, so is education, you can’t raise animals to pay for everything nowadays, now it’s just education and a good job.’”

Paulette said that what Trent has accomplished is a big influence on his siblings and other kids across the Navajo Nation. For a boy who grew up with no running water, only recently getting electricity installed at his home and having to live in the dorms at Page far from his home in Kayenta, for him to get to go to a university where he’ll continue learn and run is an incredible accomplishment.

“Anything is possible when you put your mind to it,” Paulette said. “And I always tell the kids, ‘Don’t think you’re not as great as anybody, you could be better, you can be better, make yourself better.’

Trent is eager and ready to begin his next step in life as he finishes his senior year at Page before moving on to his freshman year in college. He is certain he’ll get along well with his new team and coach, but he will remember where he is from and who his people are and he encourages other student-athletes to strive for their education while playing the sport they love.

“For those who want to compete at the next level, in the collegiate level,” Trent said. “I encourage you to continue education first and be somewhere where you want to be and don’t bring yourself down because of the education or anything. It doesn’t matter what school it is, doesn’t matter what division it is, as long as you play that sport you love.

“And for those of you that are reading this, it’s possible for you to get into a good school. Trust yourself, trust the progress, keep grinding, make your family proud and not only that, but congratulations on your future success as well.”