Due to a minor injury, University of Colorado runner Kashon Harrison may be looking at April when he returns to competition.

Harrison will not be ready for the upcoming delayed cross-country season nor the spring indoor track season. 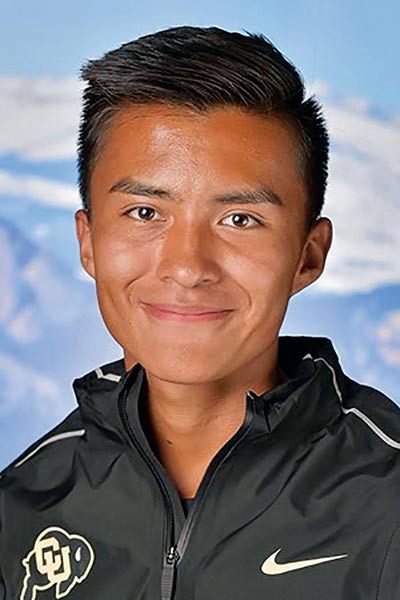 Submitted
University of Colorado runner Kashon Harrison was named the 2019 Pac-12 Freshman of the Year in cross country last year. Due to a minor injury, Harrison will be looking to return to action in April 2021.

“I’m looking forward to starting back again,” said Harrison, who got involved with Fundamental Needs, a nonprofit group that aims to help struggling families within the Four Corners.

“I miss racing against other runners and I miss meeting new people,” the CU sophomore said. “I just can’t wait to get back out there.”

Harrison’s last official race came during the 2019 NCAA Cross Country Championships when he placed 90th overall against the nation’s best.

This past spring his track season was washed out due to the COVID-19 pandemic. And because of the pandemic, the 2020 NCAA Cross Country Championships was moved from the fall to the spring.

“It’s been hard on everyone,” Harrison said. “We all want to compete but we have to look out for our own safety. Things are going to get better with the new vaccine coming out.”

Despite no competition, Harrison said he continued to train as if there were a season.

“All I can say is that my coach prepared us, “ he said. “He prepared us to be at our best and I feel like everyone on the team improved. The training went well for everyone.”

As a freshman last year, Harrison helped the Buffalos to third place at the NCAA Championships, being the fifth scoring member on the team with his 90th-place finish.

Admittedly though, Harrison said he didn’t run his best race at nationals as he struggled with the elements.

“It was cold and it rained,” he said of the 2019 NCAA Championships that were held in Terre Haute, Indiana. “It was the weather that I wasn’t used to, but it’s motivated me to do better. I still have a few more years to go.”

During the regular season last year, he placed seventh at both the Pac-12 Championships and the NCAA Mountain Region Championships.

With his top finishes, Harrison earned All-Region and All-Pac-12 First Team honors. In addition he was named the Pac-12 Freshman of the Year for his conference finish.

“It was an honor to receive those awards but I feel like the recognition that I got should also include my teammates and coaches,” he said. “They were the ones that pushed me.”

Harrison summed up his freshman season as a “special one” but he hopes that his success will inspire others.

“I want to be that person that encourages others to follow their dreams,” he said. “I want to (encourage) those on the reservation to go after it because they can do this too.”

Academically, Harrison said his first year at CU was great but he did have some struggles.

“It was scary at times but you just have to learn how to adapt,” he said, adding that there are resources available for all students.

“There is help available,” Harrison said. “You just have to find them and use them because you can’t get through college all by yourself. You need to get all the help you can get.”

To help him get through his first year of college, Harrison said he was introduced to Justice Ramos, a fellow CU runner, as part of a peer support group.

Harrison said they bonded immediately and they became best friends. The two runners along with Justice’s family formed the nonprofit group Fundamental Needs.

“It’s pretty special,” Harrison said of the nonprofit. “We just started it but we want to help every way we can.”