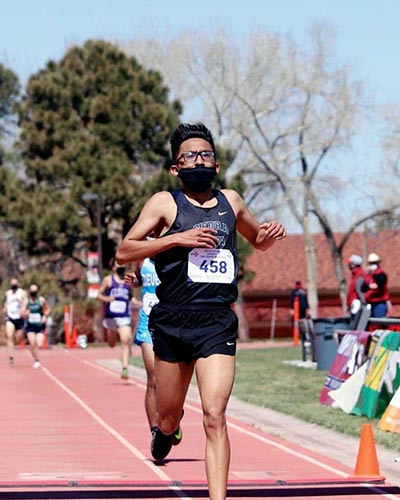 Submitted
Piedra Vista senior Makua Harvey captured the New Mexico Class 5A state crown on March 27 with a winning time of 15:49.91. Earlier this year, Harvey tested positive for COVID-19 as he endured some hardships to overcome the disease.

Much like this year’s delayed cross-country season, Harvey has been through a constant rollercoaster ride. Earlier this year, he tested positive with COVID-19 and that diagnosis shook him to his core.

“It’s been very, very tough,” he said. “Ever since I got it I just didn’t feel the same. That is when doubt came into me and it affected my confidence. It affected me emotionally, mentally and physically.”

His prognosis, however, didn’t stop him training as Harvey captured the New Mexico Class 5A state crown on Saturday, outlasting Cleveland’s Ricardo Rangel-Valencia by 1.78 seconds at the finish line.

“I felt really good and my game plan going in was to be patient,” the Diné, Japanese, Irish runner said. “I was relaxed, and I was calm and comfortable.”

Harvey said the plan was authored by PV coach Sampson Sage as he deduced that his pupil was losing steam during his races, especially when he took off too early.

That was the case during the district meet a week prior as Harvey lost the lead and placed fourth behind Rangel and two Rio Rancho runners.

“I learned from my mistakes at the district meet,” Harvey said. “My coach prepared me mentally and he was giving me advice during the race. He just kept encouraging me to continue with the game plan.”

As part of the plan, Harvey stayed behind a few runners for that first mile. But when he noticed that they were slowing down near the second mile he made his move.

“I felt that the group started to struggle so I took that opportunity to take over the lead,” he said. “Coming into that last mile I started to believe in myself and I was trusting my coaches.”

As he neared the finish line, Harvey drew inspiration from the crowd, which included his parents Anthony and Cheryl Harvey.

“I was feeding off the crowd when I got on the track,” he said, while adding that his final kick flooded his emotions.

“I remembered my family and I wanted to make them proud,” he said. “I also thought about my workouts and what I had to overcome this season. Mostly, it was all heart, and I just left it to my fitness to win it all at the end.”

Despite the hardships he endured this past season, Cheryl said her son never lost hope.

“We’re just so happy for him,” she said. “He went through a lot and there were some days he just didn’t feel well. He got really discouraged with it but we just kept telling him to keep doing what you’re doing.”

Like his wife, Anthony said it was hard to see his son struggle with this nasty virus.

“Makua had some really good days but there were some to where he got fatigued,” Anthony said. “Having COVID made it challenging for him.”

Anthony was the first family member to contract the virus, followed by Makua. His mother and young sister, Dakota, were spared.

“The biggest concern we had was how was this going to affect him?” Cheryl said of her son. “How was it going to affect his breathing? He kind of struggled with it and he kept telling us that he doesn’t feel the same.”

Admittedly, Makua said he was very unsure of himself. He wondered if he would get back to his former self.

“Before I got COVID I was very confident and I was aware of my abilities,” he said. “But after, I would do my workouts (and) I wasn’t the same. Running wasn’t as fun as it was before and I could hardly focus.

“I went through a lot of lows but I knew that I needed to continue this,” he added. “I had to continue to strive because if I had stopped I would have regretted it.”

With his resolve and determination, Makua kept a PV streak going by being crowned the individual state champion. Last season then-senior Triston Charles captured the school’s first state title in the sport.

“It’s very motivating, and it’s inspiring, especially considering where I finished at state last year,” he said of his 17th-place finish. “I wanted to prove all the doubters wrong and I wanted to prove that I could take that next big step.”

Harvey said winning state is a nice going-away present for him and come this fall he plans on running collegiately.

“I want to continue my career in this sport,” he said. “Right now, I’m trying to get into a D-1 school in Portland. That’s the school I really want to go to, not just for running but also my professional careers as well.”