Nez not happy with play, but helps Flagstaff win

Gracelyn Nez shook her head a few times on Saturday. 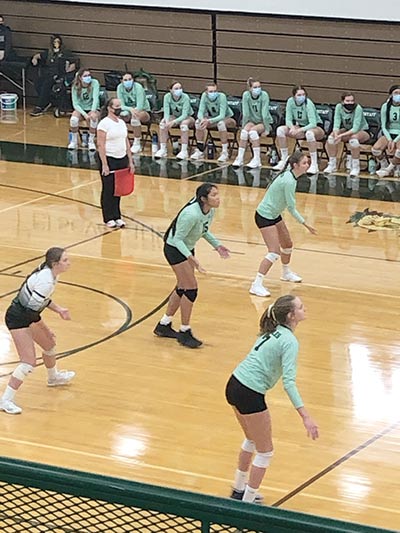 The crisp passes and laser-point hits were not as frequent as she would have preferred early on in Flagstaff High’s volleyball match with Lee Williams.

It took her almost a set-and-a-half to find some rhythm, which was quite understandable since the Flagstaff outside hitter was coming off a two-week layoff due to a bum ankle.

“My timing was off,” Nez said following her team’s sweep over the visiting Lady Volunteers with Flagstaff winning 25-20, 25-17, 25-23 in 4A Grand Canyon Region play.

“I missed six games so I was nervous,” she said. “In practice, I was fine but during the game I got real nervous.”

Nez hurt her left ankle while attempting an attack on Oct. 8 against Mingus Union.

“The set was inside and I didn’t have time to hit it over so I tried to set it over,” she said.

Instead of making that set, Nez misstepped and her ankle buckled.

“It happened real quick,” she said. “At first I tried to walk it off but the pain kicked in. I really didn’t want to go out but I felt the pain.”

In Saturday’s contest, she was still experimenting as she played everyone on her squad. The experiment yielded some inconsistent play.

“We were messing with the lineup,” she said. “We were moving people around and Gracelyn hasn’t been playing much but we got her back in the lineup.”

At times her team allowed the scrappy Lee Williams to stay within striking distance. In fact, the Volunteers battled back from a six-point deficit in the opening set and cut it down to 20-18.

The Eagles, however, turned the tide on a 5-2 run with junior middle hitter Berlynn Fowler putting down a kill. After exchanging points, Nez scored the final two with a nicely placed hit and a stuff block.

In the second, Flagstaff raced out to a 10-3 cushion with senior libero Cassidy Berry serving over eight straight points.

The Volunteers got within 12-9 behind six service points from senior outside hitter Brianna Portillo.

That was as close as they would get. Flagstaff closed out the set on a 13-6 run.

Lee Williams came out strong in the third set, leading by as much as six points (20-14) late in the contest. But Flagstaff came back and responded by getting some good swings at the net.

Fowler got the rally going with a kill and later in the set Nez added a pair of hits that cut Lee Williams’ lead down to 22-19.

Fowler kept it going with another hit down the middle and on the next point junior outside hitter Anna Henkenius got Flagstaff within 22-21.

After a timeout by Lee Williams, the visiting team got a key block from Portillo for a 23-21 cushion but the Volunteers couldn’t close it out as Flagstaff scored the final four points for the sweep.

“We were trying to work on some things so I put in people that hadn’t been in and we got down,” Haglin said of the third set. “I made some substitutions and they got the momentum going.”

Flagstaff would have played Mingus Union at home last night and they will travel to Mohave tonight for another region game.

In a pair of 4A matches outside of their region, the Eagles will host Glendale Cactus on Oct. 31 and they’ll entertain Scottsdale’s Notre Dame Prep Nov. 3 as the matches will have state seeding implications.

Flagstaff, meanwhile, was holding down the No. 11 spot with the state championships set to start on Nov. 14 with the higher seeds hosting the first round games in the 16-team bracket.

For the past two seasons, Flagstaff has reached the Final Four round, losing to Phoenix Greenway in 2018 and Goodyear Estrella Foothills last season.

“It was definitely frustrating,” Fowler said of last year’s Final Four loss. “It didn’t feel like it was our team playing out there so we’re definitely coming back this year to take it.”

With an array of varying arsenals, Fowler said the team is very diverse this year. She said the team relied on Nez to put the ball away last season, but this year anyone on the team can deliver a killable ball.

“I think it’s definitely a different lineup than last year,” the Flagstaff middle hitter said. “So far this season, we’ve really been able to come together as a team and use each other’s strengths so I feel like we have a really strong team this year.”

Nez concurred, while noting that the Eagles have some efficient hitters in sophomore opposite Haylee Gilleland, junior MB Megan Mcferson and seniors Ainsley Thomas (OH) and Alyssa Prager (OH), as well as Fowler.

“I feel like we have so many strong hitters,” Nez said. “We have a lot of guns this year and they’re all good.”

Like Fowler, Nez said losing to Estrella Foothills left a bad taste in her mouth and she’s hoping something really special is going to happen this year.

“I feel like we’re pushing ourselves more than we usually do but I’m not saying we didn’t push ourselves last year,” she said. “We’re just working hard and we’re going to push for that state championship.”