Basket weaver starts over after losing all in fire 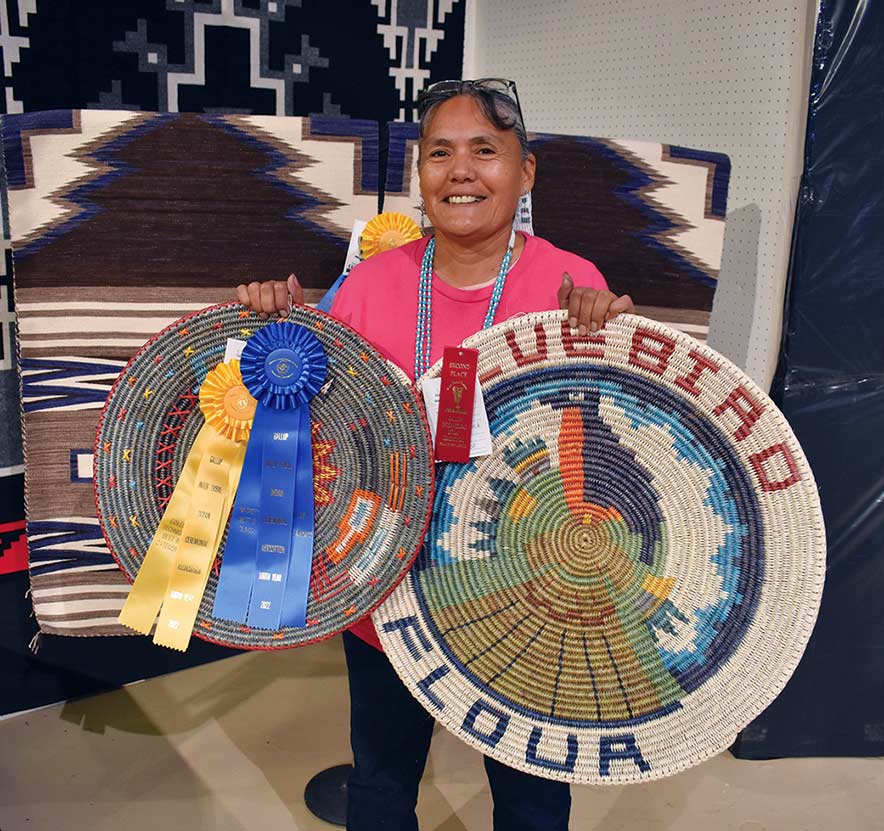 Diné weaver Sally Black, affectionately known by many of her collectors as the “queen of baskets” and famous for intricate pictorial designs, suffered a tragedy last year that left her “starting from scratch.”

On Nov. 3, 2021, Black’s house in Monument Valley burned to the ground and a dear friend who was inside lost his life.

“That morning, I left my friend over there,” said Black. “I left for Farmington. I had to sell some of my baskets.”

She said later that day her phone started blowing up with messages and calls.

Black was in a state of disbelief.

She made the 150-mile drive back home as quickly as possible.

“When I got there, they took out my friend’s body, and I thought – did it really happen?” said Black. “I was in shock. I didn’t know what to do.”

Black said she couldn’t think or do anything.

“I just froze,” she said. “My trailer was all ugly. It all just gave me really ugly feelings.”

‘It makes you cry’

Black’s burned-out trailer also contained many basket orders she had started as well as all of her weaving supplies, including harvested and prepared sumac she uses to make her baskets.

Plus all of her contact information for her clients and all of her personal documents were burned in the fire, so she had no way to reach out to people.

Black also lost all of her personal belongings, including thousands of dollars worth of traditional clothing and accessories.

“When you lose something valuable, it’s hard,” she said. “It makes you cry.”

To this day, she doesn’t know how the fire started.

“I don’t know what really happened,” said Black. “I have no clue.”

Black temporarily moved into her brother’s 12-by-14 feet cottage a little way from her trailer.

She said she hasn’t gotten any help from the Navajo Nation or the state of Arizona.

“I tried so hard – nothing,” she said. “I tried to contact Jonathan Nez and the lady that was on the front desk wouldn’t let me talk to him.”

The receptionist told Black she could apply for apartment.

“I said I don’t want to be away from the place where I am,” said Black. “If I move away, I might not move back and it might not be the same.”

The only government assistance she’s received is from the state of Utah with donations of food, clothing and a few household items.

“I said to myself, this is going to drive me crazy!” she said. “I’m just going to establish some more good things. I’m going to do it.”

Since then, Black has been working day and night to build her inventory for the art market season.

She gathered just enough sumac for her baskets to get her through the summer.

“Now I’ve been trying to climb back,” she said. “I started off from scratch again.”

‘My world was small’

Black says when she was a young girl, her dream was to become a well-known basket weaver like her mother Mary Holiday Black.

“I learned how to weave back in 1963,” she said. “I used to watch my mom. When I’d come back from school, she was always weaving. I always paid attention and always wanted to learn.”

One day when she was eight years old, she asked her mom if she could start a basket, but her mother told her she was too young and not strong enough.

“When she went somewhere for the whole day, I said, I am going to do it,” said Black.

“I really put my mind to it and I started one,” she said. “Every time when she went somewhere I worked on it.”

Black practiced and practiced, she said.

Her mother just smiled, she said.

“I told her, when you go somewhere, that’s when I work on it,” said Black. “She couldn’t believe it.”

“Ever since then, I was making baskets,” said Black. “I said, you’ll see what I become.”

‘I sold my basket’

When Black turned 13, she sat down and prayed.

At that time her mother, also a rug weaver, was making a Yei’ Bi’ Chei rug and Black took note of the colors and designs.

“Back then, everything was easy for me, my mind was really clear,” she said. “I just sat down and started weaving. I made a big Yei’ Bi’ Chei basket.”

Then a lady who came and visited told Black she should take the basket to the Heard Museum.

“Give them a call and see what they say, the lady said,” Black recalled.

Black said at that time she didn’t even know where Phoenix was.

“My world was small,” she said.

Then one day, she and her mother got into their vehicle and drove to Phoenix.

“We went to the Heard Museum and I sold my basket to them,” she said.

“From there, I started selling in trading posts,” she said. “Some people from Santa Fe wanted to know who made the baskets.”

Those people found her and asked her if she could do a workshop and demonstration at Santa Fe Indian Market.

“I got to know some people,” she said. “A lot of customers.”

This past week, Black was invited to be a demonstrator at the Gallup Inter-Tribal Ceremonial fine art exhibit, where she set up a booth for five days.

She entered the competition and won best of class in basketry for a piece called “Fire God” which garnered her a prize of $1,700.

“What we believe is that fire can burn all the bad stuff and in return it creates new stuff,” said Black.

She said being a basket weaver, you’re supposed to have a cleansing every four years or so because when you are weaving, you’re putting your thoughts into the baskets.

“The way I look at it, I lost my friend in the fire and he’s not here no more,” said Black. “I thought I’ll make something like ‘Fire God’ and I’ll enter it and everything will be OK.”

Black also placed second in the pictorial design category for a large “Blue Bird” (flour) basket, which is still for sale.

She said it felt good to be in Gallup at the Ceremonial and be among friends and fellow artists.

“I try to be strong, but sometimes it still hits me,” she said. “I’m always telling myself, just be strong no matter how it hurts.”

Black says she knows she’s not alone in her grief with all of the people who’ve suffered sickness and losses through COVID-19.

“They probably feel the same way that I felt,” she said. “The pain. What I went through, they went through that when they lost their loved ones.”

Black says in a way her basketry has saved her by giving her the strength to go on.

Everything was brand new after the fire, she said.

Black said she’s grateful to her customers and gallery owners who have reached out to help her get through this time.

“All the people that I got to know through my artwork, they’re the ones that made me strong,” she said.

“A new chapter begins, a new page in the story,” she said. “I just want things to get better for me. That’s what I want.”

She’s hoping that through the sale of her baskets this summer, she will soon have enough money to get a new home to replace the old one.

“The thing that makes me really happy is I’m still here,” she said.