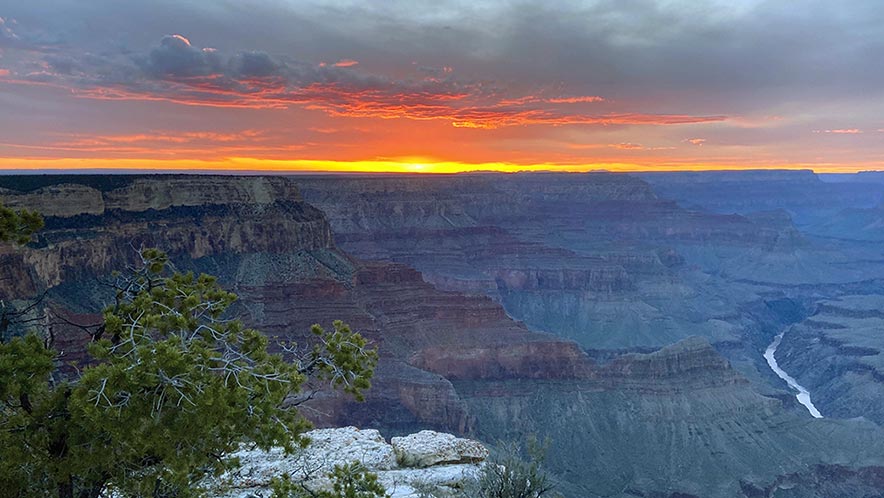 Submitted
With Grand Canyon National Park closed to visitors, maintenance worker Randy Billy can get shots like this without jostling for position with dozens of tourists.

Only weeks ago Grand Canyon National Park was teeming with visitors. The park closed last Wednesday after local and tribal officials raised concerns about the spread of the coronavirus. But now that the park is eerily still, one Diné photography enthusiast has made the majestic gorge his studio.

“No one’s going to fight for the view or the parking spaces,” said Randy Billy, a photography enthusiast, who works in maintenance at the South Rim. “I just go up there and pick a spot … and I still get to work here. Since we’re shut down until May 21, I have all that time to get some of the best photos of the view that I can, just trying to take advantage of it.”

Grand Canyon National Park, one of the last major national parks to stay open during the coronavirus pandemic, closed on April 1. U.S. Department of the Interior officials said they made the decision to close after receiving a letter that day from Thomas Pristow, chief health officer and the director for the Coconino County Health and Human Services, asking for closure following a COVID-19 case on March 30.

President Jonathan Nez told the Navajo Times Monday morning that closing the park is long overdue. “We’ve been calling for the closure of Grand Canyon to help stop the flow of tourists and visitors to the Navajo Nation due to the spread of COVID-19,” Nez said.

Millions of visitors flock to the Grand Canyon to see 1.2 million acres of colored canyon walls. A total of 6.2 million people visit the canyon every year to experience its visitor centers, mule trips, train tours, helicopter rides, and more. All visitor facilities, trails, and roads, including State Route 64 are closed until further notice. These closures will be in effect 24/7. The temporary closure is anticipated to last through May 21.

Xanterra Travel Collection, a privately-owned U.S. park and resort management company based in Greenwood Village, Colorado, is planning to reopen Grand Canyon and resume operations on May 22.

The decision to close the park and halt operations was not an easy decision to make, according to Xanterra. “But we know that this is the responsible path forward to help protect our people and our communities to slow the spread of the disease,” reads a notice to Xanterra employees.

Not allowed to leave
Billy said now he can’t leave the park. “I can’t go anywhere. I can’t leave the Grand Canyon area, I can’t visit my sons,” said Billy, who’s originally from Coalmine Canyon, Arizona. “So, I’m basically stuck here … They shut down the Interior operations and from there on, we got our hours cut.”

Billy said because the Nation is a known location for coronavirus cases, he would be at high risk of exposure if he returns to see his teenage sons. “(Xanterra) stepped up a lot and they’re giving us free rent and free meals three times a day,” Billy said. “That’s just not for me – part-time and full-time (employees as well).”

Billy said roughly 34 percent of the workforce at the park is Diné, along with some people from other tribes. Billy said while there aren’t many things to do at the park right now, he takes landscape photos of the canyon to keep him sane. He also ran into a group of Ecuadorians, who also work at the park, who befriended him and now cook for him.

“They can’t go home because they don’t have the funds to go home,” he said about his new friends, who have been sharing dishes from their homeland in northwestern South America. Billy said when his friends noticed his photos and one of him doing Rocky’s two-arms-raised salute over the canyon, on his Facebook page, they wanted to pose and do the Rocky salute with the canyon background. More people showed up to his apartment when word got out that his friends were cooking, he said.

Beauty amid a pandemic

The Grand Canyon is a reminder that there is still beauty in unsettling times and reason to be hopeful about the months ahead. “When I’m with my camera and stuff, I manage to just be in the moment – to really focus on what I’m trying to get,” Billy said. “I forget about everything around me. I just want to get this photo, this view, recorded.”

Billy said there’s always hope. “It’s always going to pass,” he said. “Every now and then, something comes out that there’s no cure and people get scared. Sometimes, it does feel like people overwhelm themselves with fear and they just isolate themselves, making themselves unhappy in some way rather than just enjoying what’s around them. For me, it’s the Grand Canyon.”