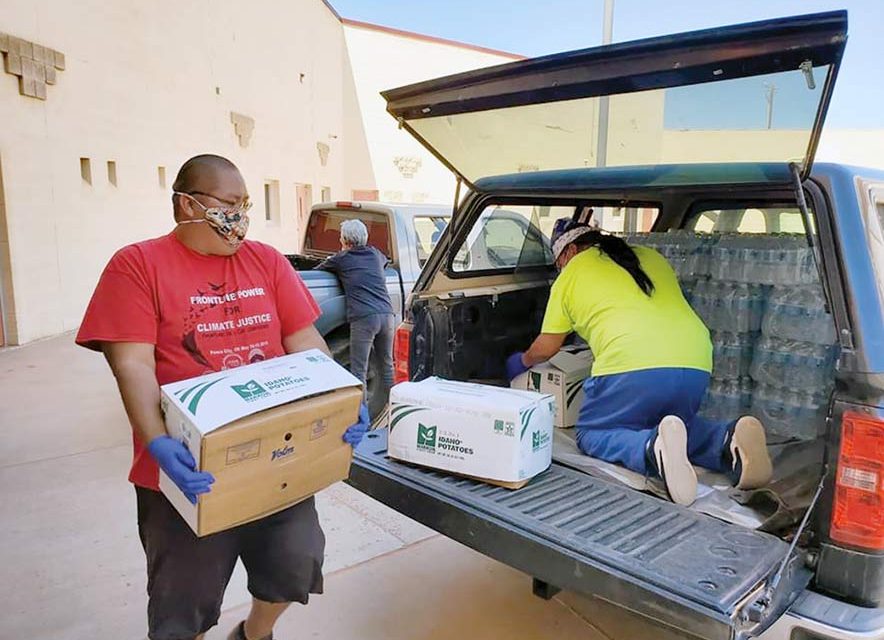 When Ethel Branch started a GoFundMe campaign on March 15 to provide relief for Diné and Hopi families impacted by COVID-19, she had know idea how quickly it would grow.

Branch, former Navajo Nation attorney general, said the relief fund was inspired by her mother, who cares for three grandchildren without running water or electricity.

She didn’t want her mom to worry about shopping for food, water and supplies and risk being exposed to the coronavirus.

Branch’s initial goal was to raise $50,000 to help elders like her mother and others who are health compromised or in need or at risk, a figure which she thought was wildly optimistic at the time.

“I honestly didn’t expect the GoFundMe to raise more than a few thousand dollars at most,” said Branch.

However, within three weeks, the fundraiser skyrocketed to over $400,000.

While there have been several large donations, most of the funds have come in small contributions ranging from $10 to $50 from all over the country.

As of Tuesday, the Navajo & Hopi Families COVID-10 Relief Fund rose to $622,000 and has expanded into a major operation, which Branch oversees with a core of team leaders and a dedicated crew of volunteers across Northern Arizona, New Mexico and Southern Utah.

Their goal now is to raise at least $1 million and that seems well within reach.

Branch, who is also mother to a four-month old baby boy whose father is Hopi, says the experience has been empowering.

“Before I started the GoFundMe, I was watching things unfold and just really felt stressed,” she said. “I had a really tough time sleeping because I was so worried about how this virus was going to impact everyone. Being able to do something about it is amazing.”

When Branch saw that it would be difficult for her to administer the funds by herself, she mobilized a volunteer team that has grown to 16 individuals who manage functions such as water donations, food purchases, volunteer coordination, supply distribution, communications and a personal protection equipment sewing operation.

“ It’s really phenomenal,” said Branch. “I reached out to some really awesome women I know, natural leaders who care a lot about our people and wanted to help. I have such a great team of self-starters and problem solvers. It’s inspiring.”

To date, the relief fund has received more than 2,951 requests and has helped more than 850 families in 35 communities, said Branch.

The group wanted to create an organization to administer the funds and get a tax exemption for donors, so they quickly applied for nonprofit status. In the meantime, the Rural Utah Project is the fund’s fiscal sponsor.

“I think our relief effort is a good example of community empowerment to not only our Nation but to the rest of the country,” said Cassandra Begay, communications team leader.

Branch said she created the grassroots operation because the only entity set up to respond to disasters or emergencies is the Navajo Nation government, which can take time to act due to its bureaucracy.

“I wanted to have an entity that could react quickly and nimbly,” said Branch. “It felt like having a non-governmental entity was necessary. We talk a lot about business entrepreneurs on the Nation but we don’t talk enough about social entrepreneurs. There’s a real absence of that.”

Ultimately, the relief funds’ goal is to safely and efficiently serve as many people as possible, she said.

“We’re not going to just wait for someone to solve these problems for us,” said Branch. “We’re going to take action make sure that there is progress.”

This week the relief fund is making about $100,000 in purchases to distribute to rural Navajo communities.

“Now that we’ve geared up and we have those dollars flowing, this is going to be a big week,” said Branch.

Major distribution centers are gearing up in Tuba City, Fort Defiance, Hogback and Gallup, along with a staging site for sterilization in Flagstaff.

“We are hoping to have many more volunteers engaged this week as we get our distribution centers off the ground,” she said. “If people want to help, I want to give them a way to help.”

Branch said most volunteers reached out to be team members or submitted information through the relief fund website and Facebook page.

The group has formulated distribution protocols including sterilization, breaking down bulk orders into smaller packages, assembling food baskets, and safety requirements for volunteers, she said.

“As people enter the sterile environment, they are asked to put on PPE, etc.,” said Branch.

Branch credits delegates like Amber Kanazbah Crotty for being a great resource.

“She’s been a source of intelligence on how things are developing across the Nation,” said Branch.

President Jonathan Nez has been helpful in identifying where the needs are, like when the outbreak happened in Chilchinbito, she said.

“We were already shipping food boxes to elders in Chilchinbito who had been identified by the chapter manager, so we were able to get food to folks in quarantine pretty quickly,” she said.

Branch said the chapter officials and Community Health Representatives are critical to the effort.

“They know who needs help and are willing to help get the resources to those folks,” she said.

The Division of Public Safety has also provided volunteers and facility resources, she said.

“This is all hands on deck,” said Branch. 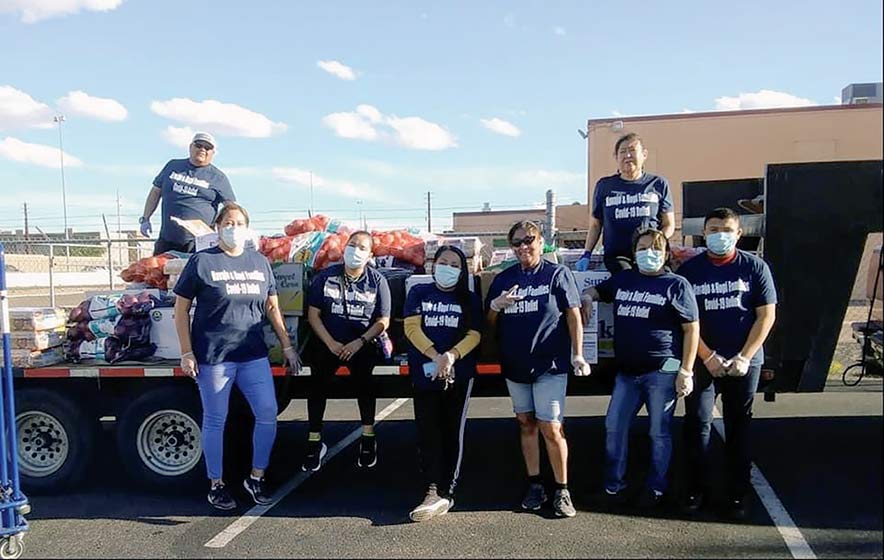 “We’re coming from a place of compassion, strength and love for our community, which has been fundamentally instilled in us in terms of K’é and understanding the interconnectedness of all things,” said Begay. “I believe this speaks to the power of Indigenous organizing when we follow those fundamental cultural beliefs.”

Delmar says sewing is a life skill and a labor of love.

“ I consider myself a domestic engineer,” said Delmar.

Putting the concept of K’é in motion, she said, has resulted in more than 50 seamstresses making over 3,000 masks and other health care garments. The operation keeps growing.

Because of the many donations of fabric the relief fund has received, she only had to spend $1,000.

She sees her role as an opportunity to serve.

“Leaders shouldn’t just sit back and let people come to them,” said Delmar. “Leaders should be saying, ‘Let’s do this.’ I’m just trying to do what my parents taught me. You’re supposed to help. You don’t need to be asked.”

Vanessa Tullie, the lead buyer for groceries and supplies for the relief fund, secured bulk orders with supplier/distributor Shamrock Foods through a restaurant contact in Phoenix.

She said the immediate goal for the relief fund is to raise enough money to provide $10,000 worth of food and supplies to each of the 110 chapters.

Tullie said being allowed to use chapter houses, senior centers or schools for storage and distribution in each community would help.

“We have almost $100,000 in food going up north this week,” she said. “We are working to serve every community through safe distribution sites and volunteers who are trained to follow PPE protocols and social distancing.”

Branch said she is concerned about the high level of vulnerability on the Nation with so many people and elders who are asthmatic, have diabetes or various other underlying health conditions that make them vulnerable to COVID-19.

She said this crisis is revealing the lack of adequate health care and other resources and failure of the federal government to uphold its obligations.

“I think this is highlighting how poorly the federal trustee has administered its trusteeship and it highlights the need for a new era in federal Indian policy that will bring parity to Indian Country in terms of our critical capital infrastructure,” said Branch. “The trustee needs to take further aggressive action to ensure health and safety.”

Branch said it is unacceptable that Navajo has such a high ratio of unpaved to paved roads, that a third of the Nation is without running water or electricity, lacks adequate broadband, two-way radio, and cellphone coverage, all of which can be lifelines at a time like this.

She said even people who have cellphones might not be able to use them because of lack of coverage or electricity where they live.

“That’s a huge public safety issue,” she said. “If somebody is in a remote area and they need food or water, if they don’t have working phone it’s very difficult for them to ask for help.”