Nonprofits work to get surplus produce to quarantining Diné 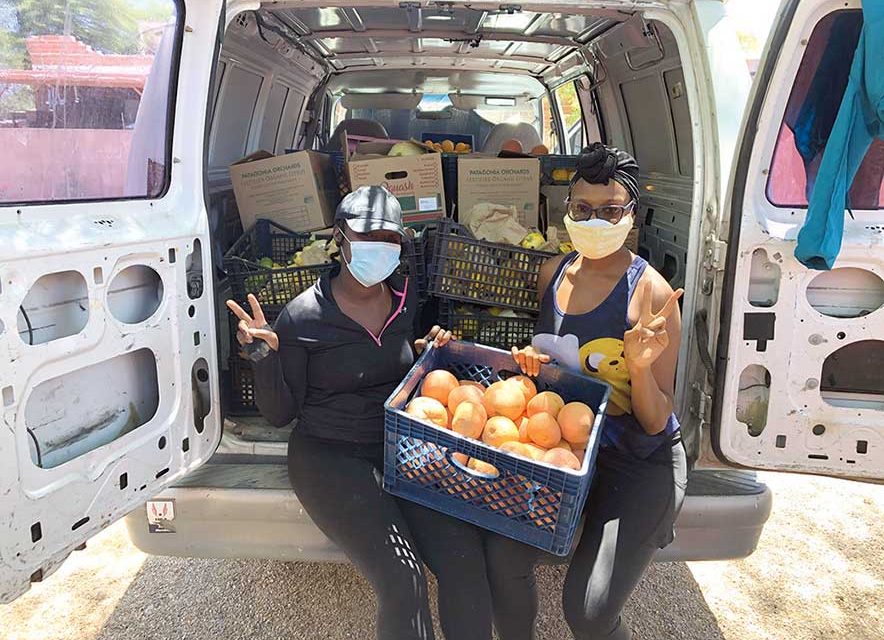 Even before the coronavirus hit, America’s food supply chains were woefully inefficient. Hunger relief organizations estimate some 52 million tons of fresh produce ends up in landfills every year just because farmers can’t get their crops to market before they spoil. Meanwhile, an estimated one in seven Americans struggles with hunger, most of them children.

In the past couple of decades, a number of “gleaner” organizations have sprung up to try to connect surplus food with hungry people. Enter the global pandemic, with its disruption of supply chains, and it wasn’t too wide a pivot for the gleaners to turn their attention from the chronically hungry to those who are quarantining or find it too risky to go to the grocery store.

On the Navajo Nation, of course, there are people in both situations, sometimes simultaneously. While Santa Cruz County in Arizona and a number of private donors stepped up, it wasn’t until recently the Nation captured the attention of some major gleaners.

Forager, a company that connects small local farms to markets and also has a gleaner program, recently partnered with Iskashitaa, a Tucson-based nonprofit that usually works with refugees, to bring 47,000 pounds of fresh produce to the Navajo Nation … and they’re raising money to bring more.

Erica Merritt of Forager said the Maine-based organization recently received a grant from ReFED, a group that connects surplus food with hungry people, to address the COVID-19 crisis. “Our company is like an eBay for food,” explained Merritt, who is working from home in Chicago, “so we were in a unique position to help with this project.”

In the middle of the grant period, Merritt recalled, “Somebody put out a call: ‘Does anyone have any ability to get food to Window Rock, Arizona?’”

Studying up a bit, Merritt learned the Navajo Nation, in addition to being a COVID-19 hotspot, was also a “food desert” — a place where fresh, healthful food is hard to come by.

“To keep your immune system strong, you really need to eat a lot of fruits and vegetables,” Merritt said. “The Navajos who were sick or trying to stay healthy didn’t have a lot of access to the foods they needed.”

Unfortunately, while Forager could identify farms and programs in the area that had surplus produce, they had no way to haul it to the Nation. “We partner with about a thousand trucking companies,” Merritt explained, “but they don’t like to do long distances.”

That’s when Iskashitaa stepped up. “They decided to drive the food up from Tucson,” Merritt said.

Iskashitaa’s executive director, Barbara Eiswerth, said that although her program focuses on refugees from other nations, it has a long history with Arizona’s Native tribes as well. “First of all, we’re operating on Native land, which should in itself be a reason for us to connect with the tribes,” she observed. But on top of that, Iskashitaa owed a debt to one of the northern tribes.

Years ago, the Hopi Foundation funded the Owl and Panther program, which offers camps for refugee children who have experienced trauma or torture. The very private tribe even offered its reservation as a venue for the camps, noting that Hopi belief sees the Hopi mesas as the center of the universe and a powerful place for healing.

“We sent lots of refugee kids up to Hopi,” Eiswerth said. “Ever since then, any time someone was driving north, I would say, ‘Can I put some fruit in your passenger seat? Do you have room for some produce in your van?’

“I’m ashamed to say it was kind of haphazard until we partnered with Forager,” she said. “Now maybe we can make it a regular thing.”

Eiswerth was having trouble finding transportation for the food until an Americorps volunteer working with her program stepped up and offered to drive the food north in the program’s van.

Then there was the problem of getting the food to the Nation and unloaded before curfew. Merritt worked with Elouise Meego at the COVID-19 Command Center, who connected her with Nate Yazzie at the Window Rock Wellness Center, which had recently been converted to a storage and distribution center for donated food.

When the truck arrived that evening, Nate was waiting with a forklift. “We got done just before curfew,” he said.

The first shipment was 2,100 pounds of squash, potatoes and citrus fruits. Then Iskashitaa introduced Merritt to a farmer in Nogales, Mexico, who had 45,000 pounds of honeydew melons ready to go. This time, thanks to the help of Iskashitaa and the Navajo Nation, Merritt had her ducks in a row.

Nate and his crew were able to distribute the melons to everyone who needed them, but there were lots left over. “We ended up just giving them out in front of Basha’s to anyone who wanted them,” he said. “People were really grateful.”

All from produce that would have been wasted.

Nate noted that the produce came just in time, as the Nation’s COVID food distribution has been divided into two programs: chapter deliveries and deliveries to COVID-positive people who are quarantining in tents so as not to infect their families.

The latter program is newer and has been having trouble getting donations. “We give them (COVID patients) a tent and two weeks’ worth of food, so they don’t have to leave,” explained Nate. “We’re actually running out of food for the COVID-positive people, and some of them are far from a grocery store so their families can’t bring them fresh produce. So we really appreciate what Erica is doing.”

The grant’s running out, but Merritt wants to keep going. She put up a GoFundMe page so that Forager and its partners can continue delivering to the Navajo, and also other Southwest tribes.

She just heard about a Colorado State Extension farm near Cortez, Colorado, that has some apples to unload, and she’s negotiating with one of the other food delivery nonprofits to get them to the northern part of the reservation. She noted she’s fairly new to Forager and the gleaning community, and to have the opportunity to address the pandemic has been rewarding.

“I’m really blessed to have gotten this position at this time,” she said. “I hope we can continue making a difference.”

Information: To donate, go to https://www.gofundme.com/f/fruit-and-veg-to-sw-native-peoples-covid19-relief. Iskashitaa is also seeking volunteers to drive produce from southern Arizona to the northern reservations.