Plaster and perseverance: The resurrection of Annunciation Mission 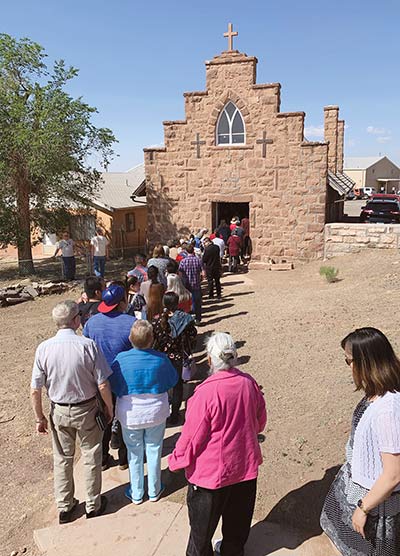 A crowd of about 150 parishioners files into Annunciation during its dedication Sunday.

In 1909, when Franciscan friars stationed in St. Michaels, Arizona, decided to build a stone church in Chinle to ward off the advances of the Presbyterians, it took them about a year.

To restore the little chapel to its original condition, after being used for decades as a youth boxing arena, thrift store, food bank and ultimately a storage shed, took 19 years.

Around the turn of the century, Sr. Katharine Drexel convinced the Franciscans to establish Catholic missions on the Navajo Reservation, part of her mission to evangelize and educate Native Americans.

She was canonized in 2000, the same year anthropologist Charlotte Frisbie, at the request of Our Lady of Fatima Parish, began working on getting the badly neglected little chapel on the National Register of Historic Places so it could qualify for state and federal restoration funds.

Frisbie has not as yet been canonized. But after hearing her speech Sunday at the triumphant dedication of the perfectly restored Annunciation Mission, one wonders if the Pope could reserve a special title for her, like Honorary Patron Saint of Perseverance.

If, as they say, the devil is in the details, it’s evident ol’ Beelzebub threw everything in his arsenal against this project — including a hurricane, a bankruptcy and a plague of bees, not to mention an almost impenetrable maze of government bureaucracy.

“It’s been a long haul,” sighed Frisbie in what may be the understatement of the year. “There were some low points, and there were some joys.”