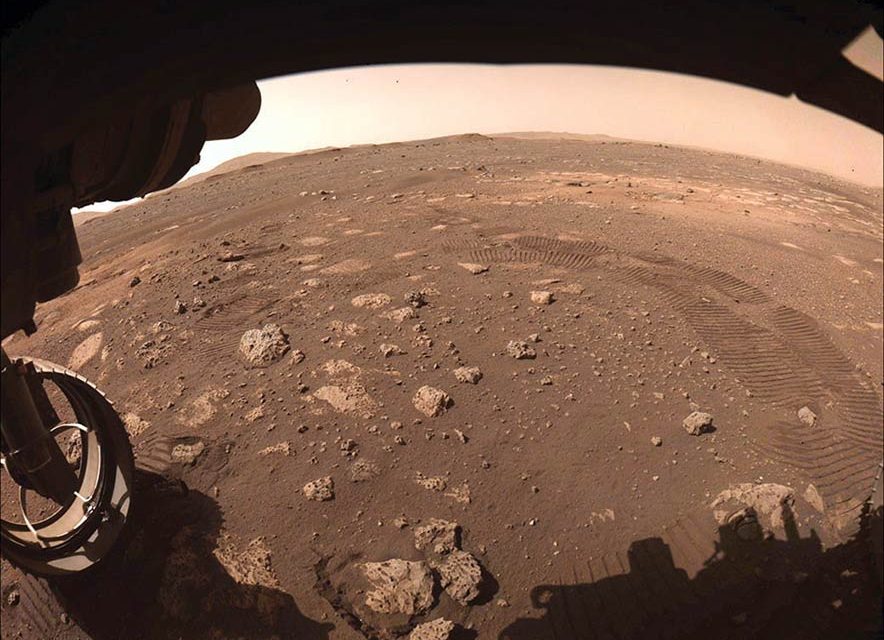 Courtesy photo | NASA/Jet Propulsion Laboratory-Caltech
This image was captured while NASA’s Perseverance rover drove on Mars for the first time on March 4. One of the rover’s cameras captured this image as the rover completed a short traverse and turn from its landing site in Jezero Crater, where the Tséyi’ quadrangle is located.

NASA is honoring Diné Bizaad through the names of different features found by the Mars Perseverance rover that landed in the Red Planet’s Jezero Crater on Feb. 18.

The rover mission is called “Máaz,” the Navajo slang term for Mars.

Mars mission members assign nicknames – in the thousands – to landmarks to provide the team a way to refer to rocks, soils and other geologic features of interest, according to NASA.

Hataałii: Use of Navajo on Mars ‘disrespectful’

Previous rover teams have named features after geologic places of interest on Earth and people and places related to expeditions.

“Aaron Yazzie, Diné, a mechanical engineer at NASA’s Jet Propulsion Laboratory in Pasadena, California, said, “Before we (landed) on Mars with Perseverance, the science team decided that they are going to sort of divide up the area (into quadrangles) where Perseverance would land.”

Yazzie was the lead engineer for Perseverance’s drill bits.

Before Perseverance launched on July 30, 2020, the mission team divided the Jezero Crater landing site into a grid of quadrangles that are about one square mile in size. The team named these quads after national parks and preserves on Earth with similar geology.

“And the idea is that wherever the rover happened to be – if it was in one of those squares, they would use the name of that square,” Yazzie explained. “Out of all the places that we could have landed on Mars, we landed on this little square that was named after Canyon de Chelly National Monument.

“Perseverance’s science team decided, ‘Oh, since that’s right in the heart of the Navajo Nation, we should think about the types of names that we want to assign to that,’” he said.

Yazzie said NASA’s team knows many places in the Navajo are are sacred or have cultural significance, so they proceeded with caution and reached out to the president’s office.

“President Nez was interested in meeting with the NASA science team,” Yazzie said. “And then around the same time, somebody on the science said, ‘Hey, there’s a Navajo that works here at the Jet Propulsion Laboratory, you should talk to him too.’ So, they reached out to me.

“It really was just because they knew that I am Navajo, and they know that I work at NASA’s JPL and I am also on the project,” he said.

“So they contacted me and asked if I was willing to participate and work with the Navajo Nation,” Yazzie said. “I said ‘Of course, I would love to!’”

Yazzie was invited to a Zoom videoconference between Katie Stack Morgan, the mission’s deputy project scientist, along with Nez and some of his cabinet.

“We wanted to use actual words in Navajo,” he said. “We knew that it would be a really important thing for language revitalization and promotion and enhancements. And we knew that we wanted to come up with a list of names that were going to be in the Navajo language.”

Yazzie was contacted to collaborate with the president’s office on Feb. 19, the day after the Perseverance landed in Jezero Crater’s Canyon de Chelly, or Tséyi’, quadrangle.

“I think that’s when the (science team) were like, ‘That’s (Tséyi’) is where we are, we need to start thinking of names,” Yazzie added. “So, our conversations have been going on since then.”

To start with, the NASA team has a list of 50 names in Diné Bizaad, some inspired by the terrain seen in images from Perseverance at its landing site.

“We have a set of names that the (president’s office) gave us that are very descriptive of the Martian landscape,” Yazzie said.

“We decided that if the Navajo words start to get too descriptive, in the interest of being translated easier for the science team and also just to learn it, we are going to make sure we have names in there that are shorter and easier to translate,” Yazzie said.

Some of the Navajo words aren’t necessarily geological features, said Yazzie. Those words include “nááts’íílid” and more inspirational words such as “nizhóní,” “hózhǫ,” and “naat’áaníí.”

Tooh Dine’é scholars say Diné Bizaad is one of the most difficult languages to learn. In fact, it played a large role in the Navajo Nation election in 2014 when presidential candidate Chris Deschene was disqualified over his lack of fluency.

And Diné have stories about being scolded or punished for speaking it at boarding school, or stories about language shaming and forced assimilation of Diné into Tooh Dine’é society.

“As Navajo people, we are always told that our words, our tongue is one of the holiest things that we have,” he said. “We can make anything happen – whether it’s good or bad.”

Brown, who is fluent, said many people across the globe want to learn Diné Bizaad, including many Diné youngsters who are not fluent.

“I see the passion and I see that our younger generation are addressing how people try to language shame or joke, but I know that the heart is in the right place,” Brown said.

“We hope that having our language used in the Perseverance mission will inspire more of our young Navajo people to understand the importance and the significance of learning our language,” Nez said in a news release.

Yazzie said the young people who don’t speak the language fluently want to learn and NASA’s use of Diné Bizaad can help with that.

“I really hope that it will work to inspire younger Navajos to learn their language,” Yazzie said.

Brown added, “It’s so fitting that NASA is finally realizing that and it’s good that they are because maybe it’s just our time as Navajo people. We are bringing the Western side of the knowledge and we are weaving it into our Navajo traditional, cultural way of living.

“And Aaron Yazzie, he’s bringing that,” he said. “We are standing on the shoulders of our ancestors.”

Members of the Diné Medicine Men Association Inc. said Mars has a specific name used in ceremony. But the general description of the Red Planet is yá biyi’di sǫ’ łichíígo dahsi’ą́.

Brown said the Red Planet is most likely a female planet like nahasdzáán.

“I see it as an honor,” Yazzie said about how NASA is honoring Diné Bizaad. “This naming thing was kind of put up to chance. We could have landed in any other square, just named after any national park.

“None of this would have happened but because it did, they (science team) decided that they would take the opportunity and actually put in the work to make something come of it like this,” he said.

“It’s great that they (president’s office) were willing to put in the extra work with us and to get all the names translated correctly,” he said.

Yazzie said he’s received a lot of positive comments from his colleagues at NASA.

A 68-year-old Diné woman, who’s fluent in the language, said she knows when the Navajo language dies on Earth, Mars will carry Diné Bizaad forever.

The woman, from the Dá’deestł’in Hótsaa area, did not want to be named.

Nez did not respond to an interview request with the Navajo Times.