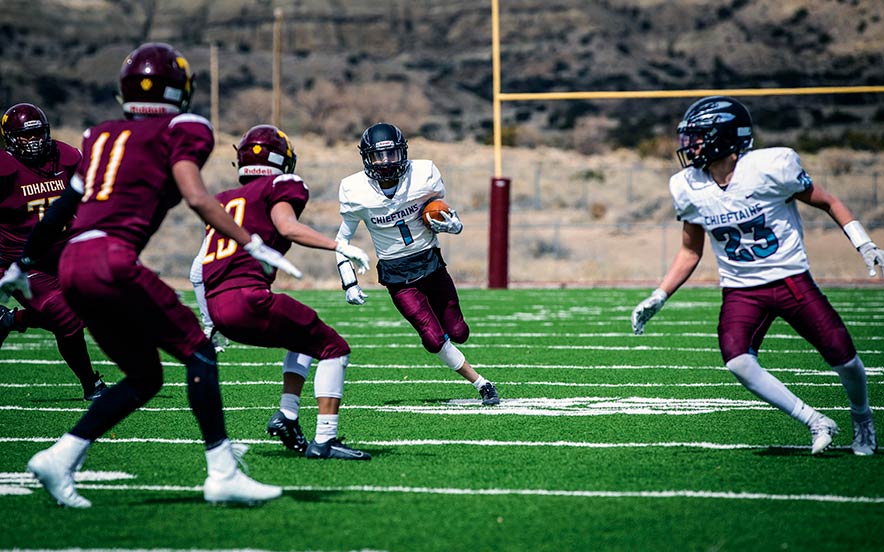 Of the two teams, the Tohatchi Cougars looked to have the fresher legs.

The Cougars had 18 players suited up and they utilized a few off the bench. Shiprock, meanwhile, came into Saturday’s matchup with only 13 players.

With more substitutions, Tohatchi was able to hold off the Chieftains by a 22-18 count.

“I think the game went really well in our favor,” said Tohatchi coach Landoll Benally, whose team improved to 2-0 in this abbreviated season.

“The boys really came together and they played as a unit,” he said. “From the get-go we told them that they’re going to need each other more than ever because we only have a few guys.”

As for his counterpart, Chieftain coach Anthony Clah had to make due with what he had as Shiprock (1-1) limped into this contest with nearly half of its players injured.

“We had some players hurt,” he said. “And then we don’t have depth. We only have 13 players so I couldn’t put someone else in and say ‘Let’s keep this going.’”

During the game, Shiprock got another player hurt when running back Jarvis Begay hurt his left forearm. For the remainder of the game, the Shiprock sophomore played wide receiver.

Behind center, the Chieftains gave Tyrese Bruce his first start as quarterback.

“They had him running a bit so he was tired,” the Shiprock coach said of his signal caller. “He was dying on the sideline.”

Tohatchi also had a few players injured too, including quarterback DeAngelo Hunch.

“He sprained his ankle (two weeks ago) so he was kind of doubtful,” Benally said. “But we rested him all week and it was a big plus to have him back because he’s a big asset to the team.”

Hunch completed 4-of-8 passes for 50 yards and one touchdown.

That TD came at the 6:42 mark in the second quarter for the game’s first score. The senior QB hit junior Bradley Bitsie for an 18-yard TD as that connection completed a 69-yard drive that took six plays.

Hunch then connected with Tyrell Bitsie on the two-point conversion for an 8-0 Tohatchi advantage.

Whitney ended up with 113 yards on 10 carries while Long chalked up 37 yards on seven carries.

After a Shiprock punt, Whitney scored his only touchdowns when he went 62 yards, as the Cougars upped its lead to 14-0 with 3:01 to go before the half.

The Chieftains got one of those scores back, finishing an 80-yard drive just in time with Bruce tossing a 23-yard TD pass to senior Arviso Nelson that cut Tohatchi’s lead down to 14-6 at the half.

After the break, Shiprock got the ball near its own 35-yard line and in methodical fashion they used up the entire clock in the third quarter. The Chieftains marched 62 yards and got to Tohatchi’s 3-yard line heading into the fourth.

But in a bizarre sequence, there was an exchange of turnovers. And after the sixth turnover, the Chieftains finally punched in a score with Bruce hitting Damien Nolan for a 14-yard score. After the failed two-point conversion, Shiprock got as close as 14-12 with just over five minutes left in the contest.

“We had the advantage with the wind at our backs,” Clah said. “(The Cougars) didn’t want to punt the ball in the wind when they had a fourth down.”

It didn’t take long for Tohatchi to strike back, thanks to a 42-yard kickoff return from Long as the Cougars started their next drive at Shiprock’s 40-yard line.

After a seven-yard gain, the Cougars used its bag of tricks with Whitney throwing a reverse-pass for a 32-yard gain that set them up at the 1-yard line.

On the ensuing play, senior Ezra Benally scored with on a QB sneak as Tohatchi increased its lead to 22-12 after a successful two-point run by Whitney with 2:40 to go.

“He’s a multi-position player and wherever I need him I’ll play him at that position,” Benally said.

The Tohatchi coach also praised the play of Whitney and Long as they combined for nearly all of Tohatchi’s 131 yards on the ground.

“Those guys came through for us,” he said, while adding that the o-line created space for them to run.

“They did a great job blocking,” he said. “They held it together.”

On the ground, Begay finished with 118 yards on nine carries before he got hurt while Bruce added 28 on 13 carries.

“I’m so proud of my boys,” Clah said. “With what we had we had to go to passing plays but we didn’t have any set plays so my guys had to play backyard football. They had to try and get open and make something happen.”

Both teams will be in action on Friday with the Chieftains playing at Cuba while Tohatchi hosts Newcomb. Tipoff for both games is 7 p.m.