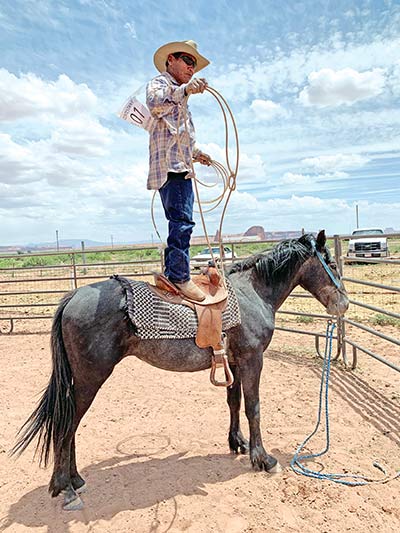 After just two days of working with an unbroken feral filly fresh off the range, Allen Curtis was able to stand up on her back. Curtis won the horse gentling contest sponsored by Diné for Wild Horses and Seminars in Rock Point, Arizona, June 1-2.

If horses had fingers, says Leland Grass, “they would rule the earth.”

“They’re so smart, and not only that, they have so much feeling,” explained the medicine man and feral horse advocate from Shonto, Arizona.

But a horse does not have hands. “That’s why he needs humans,” Grass explained.

But lately, Grass feels like the five-fingers have been failing the hoofed people. An explosion in the feral horse population on the reservation — there are an estimated 70,000 to 80,000 of them, most in the western and central agencies — has led the tribe to sponsor roundups, voluntary sales and even toy with the idea of a hunt. The rounded-up mustangs are taken to Mexico, where they are sold for slaughter.

To Grass, that’s akin to sending children off to the slaughterhouse. Or maybe elders, because, according to him, horses have a lot of wisdom to share. “There’s a reason we have songs for every part of the horse, from the feet to the nose,” he said.