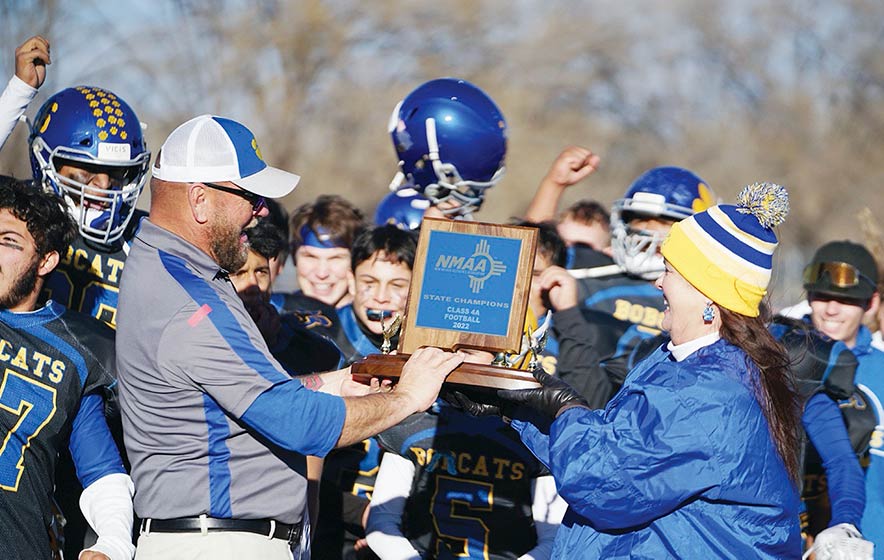 The wait is finally over.

After 56 years, the Bloomfield Bobcats claimed its second state title in school history for football.

The Bobcats did that by avenging an earlier season loss to top-ranked Silver on Saturday with a 13-7 win at Bloomfield High School in the Class 4A state championship game.

“When they won it, they won it in Jal,” second-year Bloomfield coach Mike Kovacs said of the first state title, which was won in 1966.

“This is the first time we’ve won it ever in Bloomfield, so the kids are just excited,” he said while adding that the community support has been overwhelming.

As for his group, Kovacs said his players have spent the past six months working and grinding, knowing that a state title was in the works.

“I told them from day one – you’re the best,” he said of his club. “They believed and they came out and did it today.”

Still, the visiting Silver Colts made the Bobcats sweat this one out, as they regained possession with 3:17 left in the contest.

The Colts started its last drive at the their own 21-yard line, and with four plays they advanced it into Bloomfield’s territory, which included a 27-yard gain from senior running back Ricky Vasquez. 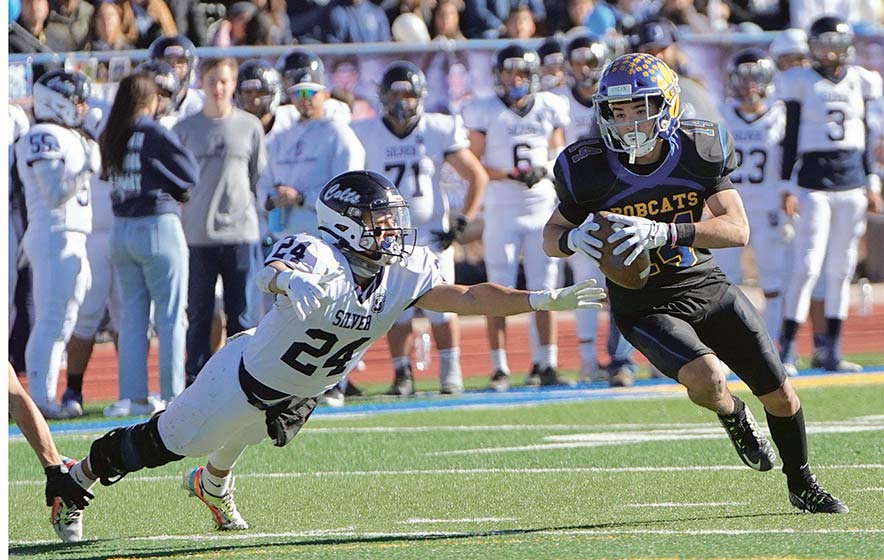 Navajo Times | Quentin Jodie
Bloomfield Bobcat Drew Perez (14) gets around Silver Colt Aidan Granado (24) in the Class 4A state title game on Saturday. The Bobcats claimed its second state crown with a 13-7 win.

After reaching Bloomfield’s 42-yard line, the Colts had its promising drive stall. While facing a fourth-and-4, Silver quarterback Adan Jacquez completed a pass to junior wideout Julian Richard in what was a 21-yard strike.

Nevertheless, that completion was ruled incomplete as Richard had stepped out of bounds prior to that pass, which gave Bloomfield possession of the ball with 1:06 left in the game.

“Honestly, I think that was a bad call,” Silver coach Jerome Ortiz said. “He didn’t step out-of-bounds, he was pushed out out-of-bounds.”

Nevertheless, the Silver coach gave credit to the Bloomfield team, as his club could not fortify its 45-6 victory over the Bobcats on Oct. 7.

“They showed up better than we did,” Ortiz said. “You know, they had some sets that were hard for us to adjust to. They had a great game plan and hats off to coach Kovacs and the ‘Cats.”

In that earlier meeting, the Bloomfield coach said they made a lot of turnovers, which attributed to the 39-point loss. In Saturday’s title game, the tides were turned as Silver finished with five turnovers and two punts.

“They humbled us when they beat us like that,” Kovacs said. “You know, we hadn’t been beaten like that in a couple years. We took it graciously, but we took it seriously. We came back, we applied ourselves and they just bent their ears back and the defense really came up big today for us.”

Of the five turnovers, the biggest one came at the 7:52 mark of the second quarter as Bloomfield’s Preston Armenta recovered a fumble at the Bobcat’s 6-yard line after Silver went 65 yards.

“Our defense was awesome,” Bloomfield defensive back George Rascon Jr., said. “Our defense stopped them over and over. On some of those third downs, our defense came up with some huge stops.

“If it weren’t for our defense, we couldn’t have won this game,” he added. “You know, defense wins championships.”

Like his coach, Rascon said the earlier season loss to Silver humbled them.

“I think that loss helped us overall,” the junior wide receiver said.

“We got our heads straight. We took every game serious, we worked hard and we got the outcome we wanted.”

Silver was the first to strike as the Colts covered 70 yards and reach pay dirt on a 10-yard touchdown run from senior Mason Lockett with 7:25 left in the first quarter.

After a series of punts, the Bobcats got on the scoreboard seconds in the second stanza when senior quarterback Ryan Sharpe completing a 68-yard drive with a one-yard run with 11:57 left in the half.

In that drive, the Bobcats completed a pair of fourth down conversions. While facing a fourth-and-15, Sharpe connecting with Rascon on a 15-yard reception that moved the Bobcats to Silver’s 10-yard line.

Four plays later, Sharpe got a nice block to get into the end zone that tied the contest 7-7.

Bloomfield got the go-ahead score midway through the third when Sharpe connected with junior Jesse Seitzinger for a 69-yard strike. In that TD pass, Seitzinger broke a tackle at the Silver 25-yard line to reach the end zone.

After the failed PAT, Bloomfield led 13-7 with 4:47 left in the third. Thanks to three Silver turnovers, the Bobcats secured its championship trophy.

“The defense just locked up and that changed everything,” he said.

The senior QB said the Colts presented some problems going into the game, especially with the personnel they had on the defensive end.

“That is the best defense I’ve played against all year,” Sharpe said of Silver. “They’re linebackers are really stout, their defensive line are really good up front. They have some really good athletes with their safeties and corners.”

Sharpe is one of 13 seniors set to graduate next spring. Kovacs said the senior class are the ones that laid the blueprint for the school’s second state title.

“That is what you want as a coach,” he said. “You want to set up a blue print, and now we just got to follow it.”