‘Told through the eyes of its residents’: Stories from the land; A Navajo reader about Monument Valley by Robert McPherson 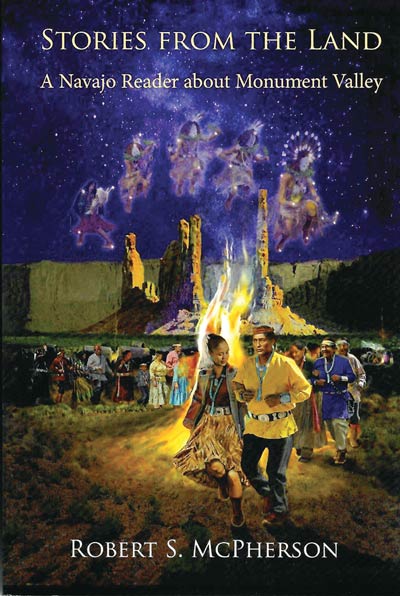 Book cover from “Stories from the Land – A Navajo Reader about Monument Valley,” by Robert S. McPherson.

He has described the northern Navajo frontier 1860-1900, sacred lands and sacred views, traditional Navajo teachings, and upper Four Corners trading posts in “Both Sides of the Bull Pen.”

His books include biographies of Navajo medicine men, Navajo code talkers, and the Navajo experience in Utah.

McPherson’s latest book is “Stories from the Land: A Navajo Reader about Monument Valley.” He uses oral histories recorded from elders in the late 1980s and early 1990s.

With dramatic cover art by Charles Yanito, two excellent maps, and plenty of historic photographs, the twelve chapters in “Stories from the Land” begin by “Embracing Monumental Memories” and go on to define and describe Navajo life and culture in Monument Valley.

McPherson uses Navajo voices in carefully edited chapters that focus on living in sacred space, respecting and understanding the Anasazi or Ancestral Puebloan legacy, and tribal history related to the Long Walk.

He skillfully blends other voices and stories such as passages from Louisa Wetherill’s 1930s interviews with Wolfkiller, whose family originally hid from Kit Carson’s soldiers but then surrendered to go to Bosque Redondo.

As with all of the chapters in this book, it focuses specifically on Monument Valley and so what the reader receives is a very close look at the lives of generations of Navajo inhabitants. Unlike many books written about specific Navajo communities, this one is told through the eyes of its residents.

“Stories from the Land” encapsulates the Monument Valley experience, but it also reflects themes and ceremonies from throughout the Navajo Nation.

A pre-eminent modern Navajo scholar and skilled ethnohistorian, McPherson edits so that Navajo voices come through with clarity and cohesion.

Elders recall their childhoods, how hard they had to work and how they were conditioned to rise before the sun to safeguard family flocks as sheep moved from grass to water and back.

What makes this book powerful is the way McPherson looks at every aspect of Navajo life and the dramatic transformation from the end of the nineteenth century to the end of the trading post era.

Trading post stories emphasize Oljato. The painful era of livestock reduction and “Sheep-killer John Collier” is described. Both men and women vividly recall the loss of their goats, sheep, horses, and cattle and the waste of much meat, hides, and fleece.

For Navajos such wanton destruction made no sense in the 1930s, and it is hard to comprehend even now that reducing the people’s herds in such a brutal way would have helped with overgrazing.

McPherson utilizes oral histories from both livestock owners and range riders, some of whom complied with orders but also let families retain their best stock.

There are chapters on the first autos into Monument Valley and stories about movie-making, John Ford, John Wayne, and Navajo actors and extras who learned how to safely fall from their horses in front of movie cameras.

Harry Goulding, who brought Hollywood to Monument Valley, was an Anglo who gets his own chapter in the book because of his influence, his purchase of land from the state of Utah, and comings and goings from Goulding’s trading post.

Harry was and still is a controversial character with both positive and negative qualities. There is no doubt he was a successful businessman, but there are still issues that the people of Monument Valley struggle with that began in Goulding’s era. The reader is left to decide this entrepreneur’s intent.

Medicine man John Holiday (1919-2016) has a prominent role explaining changes in Navajo culture and the impact of boarding schools.

Elders comment on boarding schools and how they altered the lives of the children taken away from their homes for months at a time. The experience not only forced them to learn English, but also prepared them for World War II.

Probably the most poignant stories in the book are about uranium mining in both small and large mines such as Monument Two operated by the Vanadium Corporation of America.

John Holiday, Billy Yellow, Luke Yazzie, Shone Holiday and others vividly explain the dangers of mining, the need for prayers and ceremonies to stay healthy, and the later unseen impacts of radiation.

“Perhaps no single experience in the twentieth century has catapulted the Navajo into the modern Anglo world in quite the same way as the uranium boom,” writes McPherson.

“Stories from the Land” concludes by chronicling the ongoing impacts of tourism in Monument Valley Tribal Park and hordes of camera-ready tourists.

The last chapter, titled “Tradition, Tourism, and Trade-offs: The Price of Being Iconic,” addresses the economic benefits of tourism and a growing hospitality industry, but also asks the question “at what price?”

The dramatic red rock monoliths in Monument Valley have sheltered Navajos for generations. What was once remote on the Arizona-Utah border is now an international tourist destination. Cinematographers come to shoot feature films and countless commercials.

As perspectives of Monument Valley evolve, the book “Stories from the Land: A Navajo Reader about Monument Valley” will itself stand like the sandstone buttes and pinnacles the elders lovingly describe, telling a people’s history tied to a sacred place.

Andrew Gulliford is a professor of history at Fort Lewis College in Durango, Colo.