The Indian Health Service on May 6 announced that Benjamin Smith, an enrolled member of the Navajo Nation, is the new deputy director at IHS headquarters.

As deputy director, Smith will lead IHS operations to ensure the delivery of health services and that services are integrated across all levels of the agency.

“We are excited that Mr. Smith will be serving in this important new role as deputy director of the Indian Health Service,” IHS Acting Director Elizabeth Fowler said.

“He has been a consistent leader at IHS headquarters for several years,” she said. “He has a wealth of experience providing leadership on tribal and urban Indian health issues, and I look forward to working with Mr. Smith on improving quality health care services throughout Indian Country.”

The IHS deputy director is responsible for collaboration between IHS and tribes and assisting with developing standardized metrics and monitoring the progress of goals.

Smith joined the senior executive service in March 2012 and has served as the deputy director for intergovernmental affairs at IHS headquarters since November 2016, where he provided leadership on tribal and urban Indian health activities.

He has also served as the IHS Office of Tribal Self Governance director.

“I have always been passionate about serving our American Indian and Alaska Native people,” Smith said, “and look forward to continuing my career at IHS with new challenges and responsibilities.”

Before federal service, Smith worked as a self-governance specialist for the Choctaw Nation of Oklahoma.

He has received numerous awards throughout his career, including the 2020 National Public Service Award from the American Society for Public Administration.

In 2014, he received the Arthur S. Flemming Award from the George Washington University Trachtenberg School of Public Policy and Public Administration.

YA-TAH-HEY, N.M.– Sacred Wind Communications, a New Mexico telecommunications company, on May 6 announced the hiring of Teresa Hopkins as the new director of governmental and tribal affairs.

Hopkins began employment with Sacred Wind on April 11 and will be working out of the company’s Ya-Tah-Hey headquarters.

Hopkins is an enrolled member of the Navajo Nation and hails from St. Michaels, Arizona.

She has served four years as executive director of the Navajo Nation’s Telecommunications Regulatory Commission.

From 2010 to 2015, she was special project director and deputy director in the tribe’s judicial branch.

She has also held positions in the legislative branch and the Division of General Services.

Sacred Wind’s CEO John Badal said she will work with the Navajo Nation, Federal Communications Commission, and other state and federal governmental offices.

“She will also assist in development and implementation of policies and procedures for the Company which conducts business on Navajo and other tribal lands,” he said, “including marketing plans, so as to better serve its customers.”

SAN FRANCISCO – The board of directors for the Friendship House Association of American Indians named Gabriel Pimentel as its new executive director after a five-month nationwide search.

Pimentel is Apache and was previously the executive director of the Southern California Indian Center.

Friendship House is the oldest social service organization in the United States run by and for American Indians and Alaska Natives.

Since 1963, the organization has helped nearly 6,000 clients recover from substance abuse using a model that integrates traditional Native healing with evidence-based practices.

Pimentel is only the second executive leader in the organization’s history, succeeding Helen Waukazoo, who founded Friendship House in 1963 and remained CEO until her passing in April 2021.

Her leadership and vision to build “a place for healing” from substance abuse and trauma would eventually establish Friendship House as a national leader in urban Indian health and advocacy.

“I could not be more grateful to be a part of such a well-established and well-loved organization as Friendship House,” Pimentel said.

“This organization consists of an extremely talented team with a long history of dedicated donors and community partners,” he said. “My goal is to build upon the immense achievements of the past 59 years.”

Jessica Skye Paul, the board’s president, said, “He is an energetic entrepreneur with a passion for positive change. His knowledge of urban Indian communities, health policy, and fundraising is exactly what is needed to carry the organization’s vision forward.” 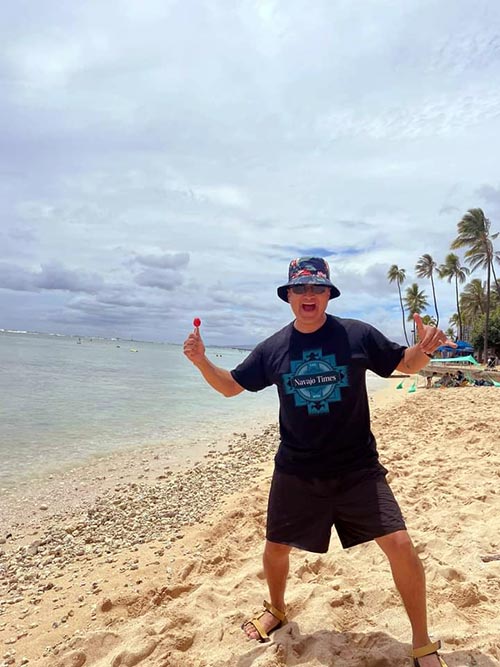 Courtesy photo
Ambrose “Andy” McCabe Jr. wears a Navajo Times T-shirt while on vacation in Oahu in Hawaii. He is originally from Kinlichee, Ariz., and lives in Phoenix where he is a metrology technician.