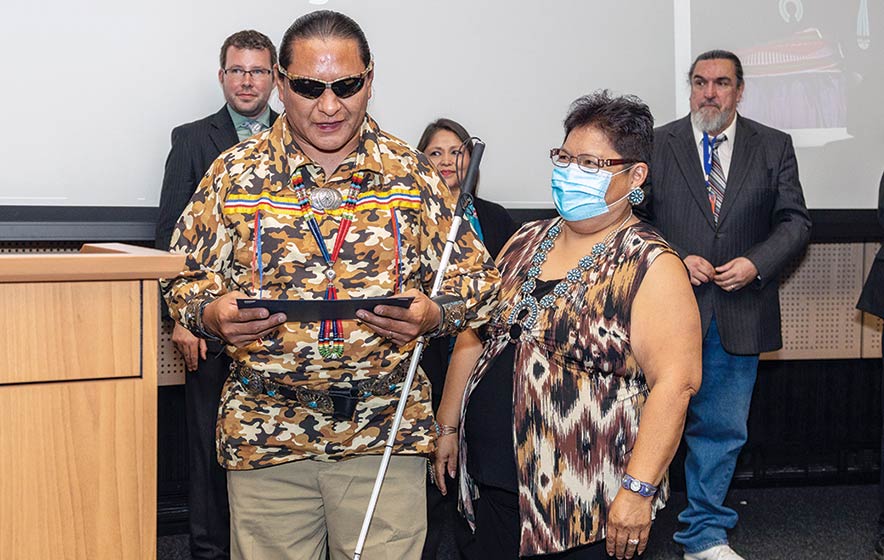 As a soldier in the U.S. Army, Manuel (Manny) Tsosie had one of the most dangerous jobs in the military.

In training at Ft. Bragg, North Carolina, he had the task of jumping out of airplanes and helicopters and taking apart land mines and booby traps.

Then, something went terribly wrong that caused him to lose his sight.

Tsosie, who is from Coyote Canyon, New Mexico, said he was sent home and his first reaction was to feel sorry for himself.

“I pushed every one away from me because they didn’t know what I was going through,” he said. “I pretty much dug a hole and put myself in there as far as I could dig.”

Then, he met Marietta Herrera from Counselor, New Mexico, who started taking him to appointments.

“I was surprised when she spoke to me in Navajo,” he said.

She encouraged him to go to school.

“You have a gift to help others,” she told him.

His life started to turn around.

Herrera and Tsosie married and with her encouragement, before and after their marriage, he discovered TRIO Student Services at Central New Mexico Community College.

Thanks to the Education Act of 1965, TRIO programs are federal outreach and student services for low-income and first-generation college students and students with disabilities. The goal is to help them succeed in higher education.

Now, there are eight, according Magda Martinez-Baca, director of TRIO Student Services at CNM.

Like other TRIO programs across the country, Martinez-Baca’s department is an open door to academic coaching, career counseling. tutoring, time management and finance workshops.

“We work with (students) on their goals to help them graduate and transition to college,” said Martinez-Baca.

There are 180 TRIO students at CNM’s main campus and 150 at the Montoya campus.

“I started getting involved with them and it made (going to school a lot easier),” he said.

He also made life-long friends.

One of them is Gerald Padilla, also a veteran attending CNM, who volunteered to help Tsosie get to classes.

Padilla said he was also impressed with Tsosie’s tenacity.

“He is really an achiever,” Padilla said. “He doesn’t let his blindness block him. He is going to do whatever it takes. He doesn’t quit. He thinks all of the time on how he (can accomplish his goals).”

Proud of his friend’s accomplishments, Padilla added, “And when he makes those incremental steps towards his goals, he puts that smile on his face and says ‘I did it!’”

Tsosie likens his challenge to succeed to a weaving.

“There may be a lot of things wrong with your rug,” but, he said, surrounded by the right people, like his mom, Annie Tsosie, in memory of his dad, the late Mark Tsosie, his wife Marietta Tsosie, and his in-laws, Jimmy and Helen Herrera from Counselor, Arizona, and supportive programs like TRIO and the Native American Church, he is on a new path.

“(They) teach you how to weave correctly and help you start re-weaving your life,” he said.

On Friday, April 29, Tsosie’s hard work paid off. He graduated with associates in psychology and human services.

President Jonathan Nez, who gave the graduation speech, was there to congratulate Tsosie, Rachel Yazzie from Teec Nos Pos, Arizona, and the other graduating TRIO students.

Yazzie attributes her success of graduating with associates in psychology and liberal arts to TRIO Support Services and two CNM core values – stay connected and be courageous.

She said that being part of the TRIO program allowed her to stay in touch with her professors, tutors and achievement coach and she, like Tsosie and other students, was fortified by the encouragement and validation she received from CNM.

Continuing with his goals, Tsosie has set new sights on a bachelor’s degree, then a master’s in psychology.

“The reason why I chose psychology is to be able to learn from the Western world and intertwine it with Diné traditions,” he explained.

He said blending the two will especially help veterans.

“There are a lot of them out there who are still suffering,” he said. “They are being neglected. They need help.”

Tsosie plans to attend the University of New Mexico this fall.

Tsosie had words of advice for students securing educational opportunities like he did.

“I tell the students, ‘I’m blind, I go through a lot of anxiety coming to school,’” he said.

But he added he perseveres because of the opportunities ahead.

“We are walking investments,” he said. “If we don’t graduate or be successful, it all goes to waste. You got to apply yourself.”