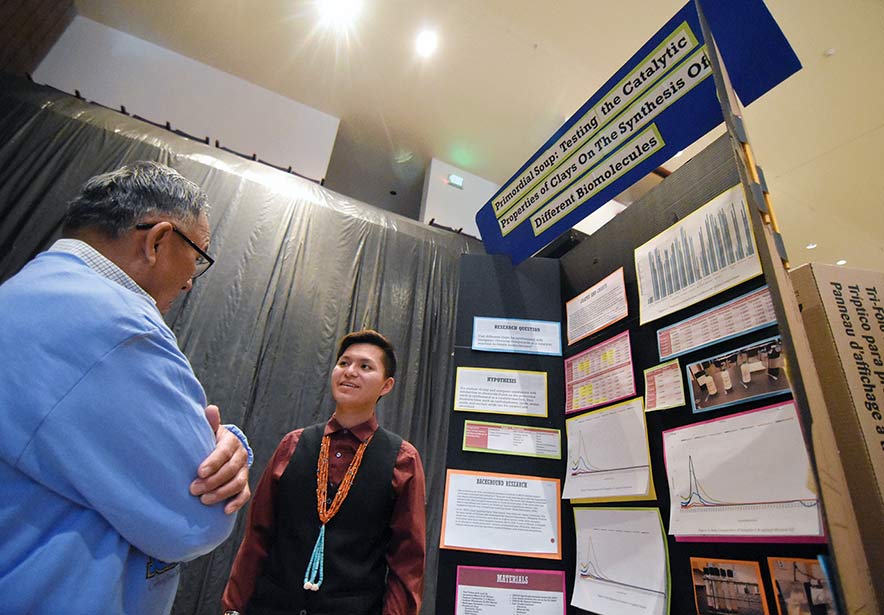 Sky Harper has competed in the Navajo Nation Science Fair since his sophomore year at Navajo Preparatory School.

It’s been part of his journey to the Intel International Science and Engineering Fair that he has competed in for the last two years.

Harper, 18, is gearing up to hopefully compete in his third and final year at the international science fair that will be held in Anaheim, California, this year.

His senior science fair project was once again inspired by Navajo creation stories.

“We have our story of Asdzą́ą́ Nádleehé,” said Harper, who is Dziłtl’áadi Kiyaa’áanii born for Táchii’nii. “The story goes that she rubbed off some of the dirt and some of the clay off of her skin and shaped it into balls to create life.”

So Harper wanted to see if clay could be a catalyst and foster a living organism.

“She used a type of clay and I’m using clay to try to create life,” he said. “I compared six different clay samples.”

Then he added different elements to each of the clay samples.

“This year’s science project is mostly focused on trying to find the origin of life and how we transitioned from just chemicals to actual cells,” Harper said.

The young scientist is on a quest to help NASA in its search for life on other planets.

Since 1995, after the first concrete discovery of an exoplanet orbiting a sunlike star, NASA has been on the search for signs of life on other planets, according to its Exoplanet Exploration Program website.

An exoplanet is “a planet orbiting a star other than our sun,’” according to NASA.

“This project is so beneficial to society because NASA, as of now, they’re trying to identify life on other planets, but they’re having difficulty finding markers that basically tell them yes, this certain molecule, this certain organism would be present here,” he said.

Harper is currently in the process of patenting his research that he conducted at his high school science lab.

“(NASA is) trying to experiment with different chemicals and trying to combine them and see if it yields a certain type of biomolecule,” he said. “But what I decided to do was utilize a different type of clay in hopes that it’ll catalyze it.”

Harper’s research works from cell theory that “says that cells originated one of three different ways,” he said.

The first theory is that life originated from geothermal vents located in the ocean. The other is that cells are extraterrestrial and came from an asteroid. The final theory is what Harper is testing. It’s “called primordial soup.”

“What this means is a specific set of compounds were in us,” Harper explained. “We’re basically in a pond. They had all the right chemicals. It was at the perfect temperature and this synthesis of biomolecules occurred.”

Then, boom! Living organisms began to grow, flourish and multiply to create life on earth. This is Harper’s research in a nutshell.

“I discovered that my clays did indeed have a direct correlation with the biomolecules that were present,” he said. “I was able to catalyze these reactions and create biomolecules.”

Biomolecules are molecules that are “produced by a living organism,” according to Lexico by Oxford University.

His research won him first place in the senior chemistry division and second place overall at the Navajo Nation Science Fair.

The science fair sponsor for Navajo Prep is Yolanda Flores, who has her master’s in teaching biology, and has been growing the science fair program at her school.

Through other scientific competitions the school has been awarded external funding of around $20,000 for lab equipment over the last three years. Just two weeks ago the school was also able to take students to visit the NASA Kennedy Space Center in Florida.

Through his research Harper has been recognized as the 2018-19 New Mexico STEM student of the year and the 2019-20 Arizona future innovator of the year.

He will be attending Drexel University, a private institution in Philadelphia, this fall on a full-tuition scholarship. He was one of eight who earned these scholarships at last year’s international science fair.

According to the 2019 press release, Drexel University awarded eight full scholarships valued at $200,000 each to those students whose projects match Drexel’s curriculum.

“Drexel is recognized for its focus on experiential learning through co-operative education, its commitment to cutting-edge academic technology and its growing enterprise of use-inspired research,” the release states.

Harper is going into his undergraduate studies with an open mind and hopes to study in the health sciences as he wants to be an anesthesiologist. Although he is open to studying chemistry, biochemistry and mathematics because of his deep interest in conducting research.