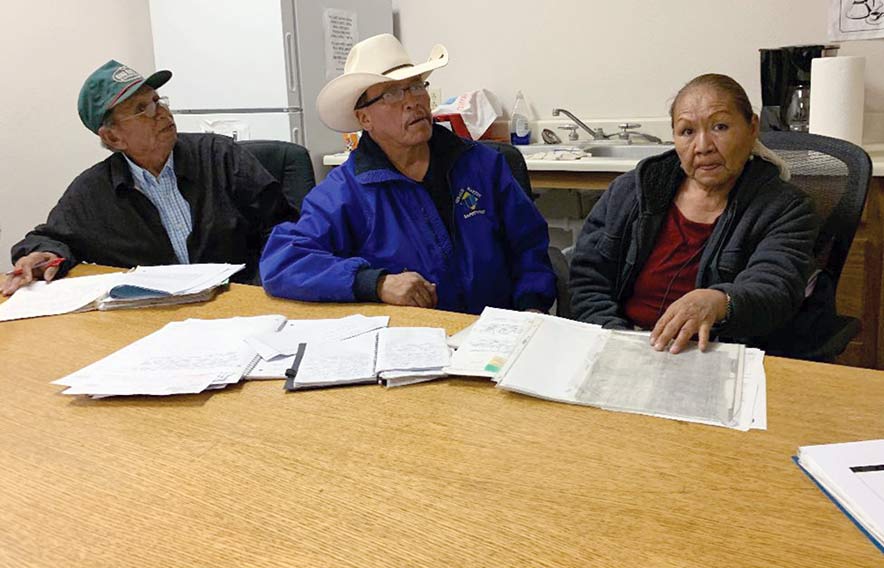 Navajo Times | Cindy Yurth
Eddie Draper, center, and Bertha Tom, of Baahaali, show their files of documentation for their range unit while land board member Robert Delgarito looks on. Draper and Tom said they’ve always complied with grazing law and don’t know why their range unit was transferred to another person.

A group of about 20 Eastern Agency ranchers say the three-party agreement governing grazing land on Eastern Navajo has broken down and the Bureau of Indian Affairs is filling the power vacuum without consulting grazing permitees.

“What’s heard from our government officials seem to be just threats,” said Albert Shirley of Iyanbito, New Mexico, one of the spokesmen for the group. “Numerous people have grievances and there’s no due process.”

At the center of the problem is the demise of the local land board, which represents the Navajo Nation in the 1965 memorandum of understanding that oversees grazing in Eastern Agency.

According to the ranchers, the power and compensation of the elected land boards has been steadily eroded to the point that a lot of land board members aren’t showing up for meetings and there’s no quorum.

The land boards are supposed to mediate disputes and make recommendations to the BIA, which has the ultimate authority to issue grazing permits.

But the ranchers say in the absence of the land boards, the BIA’s natural resource specialist in the area, Effie Delmar, is making bizarre decisions without consulting the locals or even telling them.

Delmar, contacted at her office, said she was unaware of the ranchers’ grievances and added that as a federal employee, she’s not allowed to talk directly to the press. The BIA’s public affairs department did not return an email by press time. A note on the BIA’s website says the department is reorganizing.

The most egregious example of BIA overstep, according to the ranchers, is in Iyanbito Chapter where Delmar allegedly canceled several grazing permits without the knowledge of the permittees, consolidated them and gave the resulting large permit to one family.

Wilbur Murphy, who was on the district land board at that time, said the board had opposed the move and local rancher Arnold Collins added that Iyanbito had passed a chapter resolution against it.

According to Emery Chee of Baahaali, New Mexico, the permits in question had been in the same families for decades before they were canceled.

“This was not their land just yesterday,” he noted.

The joint land board in Huerfano, New Mexico, overturned the BIA’s decision, but the family who was awarded the permit is still grazing livestock there, according to Murphy.

In another case in Baahaali, Bertha Tom and her husband Eddie Draper noticed somebody building a house on their range unit, which had been in Tom’s family for generations.

When they brought it to Delmar’s attention, they said, they found out the range unit had been transferred to that person.

“We did everything we were supposed to do,” said Draper, showing this reporter a binder containing all the documents the couple was required to submit to renew their permit. “It was like somebody took both hands, reached into my insides and ripped it out.”

Other ranchers complained that the BIA had lost their grazing permit applications, failed to invoice them for grazing fees and failed to provide a receipt so they could prove they had paid.
Shirley showed this reporter a letter dated Feb. 6 the ranchers had sent to President Jonathan Nez asking for his advocacy.

“He’s the one person who could tell the BIA to abide by the agreement,” he said.

The ranchers say they haven’t heard from Nez. The president’s spokesman, Jared Touchin, said the president’s office is “working with the (Division of Natural Resources) and others to respond appropriately to the concerns raised by these individuals.”

He said the office’s efforts are focused on preparing for the possibility of coronavirus appearing on the Nation, but “President Nez has said he is willing to meet with the group and our office will reach out to arrange a meeting.”

Shirley said the ranchers aren’t going to go away quietly. Since two of the parties to the agreement — the Bureau of Land Management and the BIA — are federal entities, they’re going to enlist the help of U.S. Rep. Ben Ray Lujan, D-N.M.

“We’re going to keep going up the chain of command until we find someone who can help us,” Shirley said. “I don’t know what else we can do.”