Autumn Pilcher, 20, stood tall in her rug dress as she held onto the Miss Gallup Inter-Tribal Indian Ceremonial crown that only moments before was placed on her head by outgoing queen Ashley Claw. 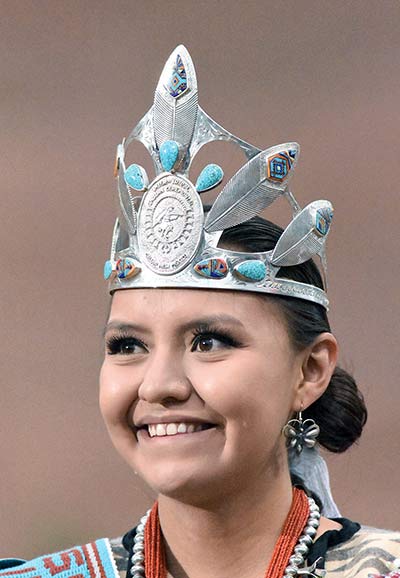 After being named the 2019-20 Miss Ceremonial, Pilcher emotionally introduced herself to the large crowd at Red Rock Park during Friday evening’s coronation and night performance. Pilcher’s mom, Brenda Pilcher, said her daughter had nothing but strong family support when she decided to run for Miss Ceremonial.

“The whole family shows her a lot of support,” said Brenda. “We are her number one supporters. We travel with her. I make her dresses, her dad makes her belts. She has family in Mescalero who help with beaded stuff they make for her.” Originally from Fort Defiance but currently residing in Mescalero, New Mexico, Autumn Pilcher is Apache, Navajo and Oglala Lakota. She attends the University of New Mexico in Albuquerque. She ran on the three platforms of bringing awareness to domestic violence, missing murdered indigenous women, and self-care and self-love.

“Domestic violence has affected my family personally,” said Autumn. “It’s a huge epidemic on our reservations. It needs to stop and respect our women and children. Our children are affected by it.” As for her other two platforms she said bringing awareness to the missing and murdered is important for women to learn the signs in order to help prevent these incidents from occurring. “Self-care, self-love is to bring awareness to mental health,” she said. “I want all of our Indigenous brothers and sisters to not only be healthy physically but mentally is where it all starts.”

A former Miss Mescalero, Autumn’s dad, Dennis Pilcher, knew his daughter had a good chance of winning the crown. The other contestants that competed against Pilcher were Aysha Catron Tsosie, 18, from Window Rock; Lani Rae Padillla, 25, from Lake Valley, New Mexico; and Tyneesha Lupita Charlie, 20, from Brimhall, New Mexico.

Charlie said the week was good because of the bond that formed between her and the other three contestants. Her platform was bringing awareness to cultural genocide and trying to prevent Navajo culture from being lost. “Ever since I was a young girl I always said, ‘I want to be a princess,’” said Charley, who is currently a welding apprentice. “And this is one way to do it. These girls treated me like family, not like competition. They’ve helped me out a lot.”

Padilla, who received an animal science and agriculture business management degree from New Mexico State University, decided to run in honor of her late grandmother and to represent the ladies who played a leadership role in her life. Her platform was to encourage her “Indigenous brothers and sisters” to get an education in both modern and traditional teachings.

“I remember when I was just a little girl coming here and I never thought I’d be the one in the arena,” said Padilla about how it felt to compete for Miss Ceremonial. For Tsosie, she said the pageant was amazing and exciting. For her modern talent she played an acoustic guitar, which is a healing mechanism for her.

For her traditional talent, she spoke about the significant meaning of corn and what it means for the Navajo people. “I was excited to meet my fellow contestants, who are now my sisters,” said Tsosie, who won both Miss Photogenic and Miss Congeniality. “We all had embarrassing and funny moments this week, but the memorable moment would be walking in the night parade with one another.”