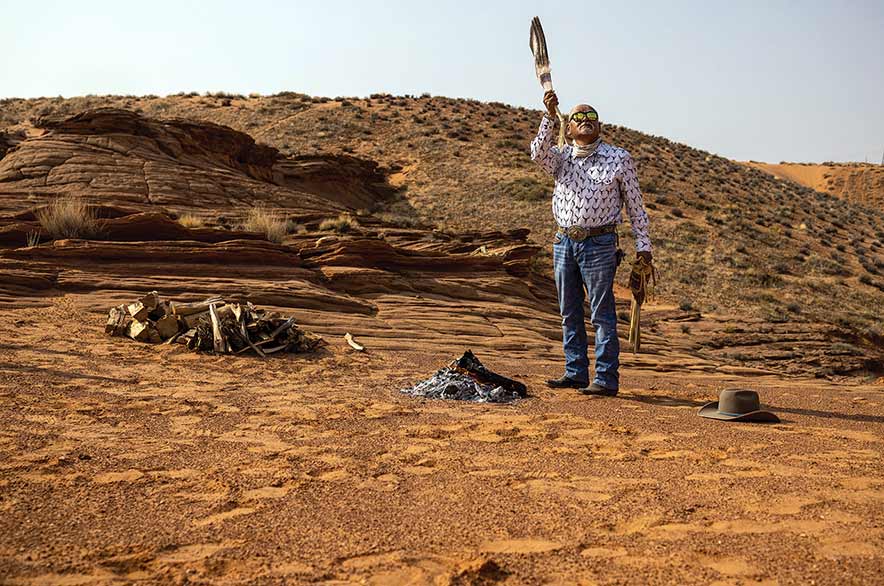 Navajo Times | Sharon Chischilly
Kenneth Young, owner and operator of Ken's Tours in Lower Antelope Canyon, says a prayer during a reopening ceremony at the entrance of Antelope Canyon in LeChee, Ariz., on July 12.

Kenneth Young sprinkled bits of gad ni’eełii over sizzling stones as he invited guests at an early-morning ceremony near Tsé’ésdooltas to bless themselves and to breathe in the sweet aroma.

Upper and Lower Antelope Canyon, Tsébighánlini and Tsébii’ Hazdeestas-Tsé’ésdooltas, closed for 485 days because of the coronavirus last year.

“When the sun came up one day, everything just shut down,” said Young, who along with his wife, Emily Young, is the owner and operator of Ken’s Tours in Łichíi’ii, Arizona.

“Not just here, all over the world,” he said. “Everything was going pretty good and it went down pretty fast.

Sickness such as the coronavirus will come and go, said Young, who believes diseases are nature’s way of controlling populations just as overgrazing does for livestock.

“That’s how we are as people,” Young said. “This COVID came around and took a lot of our friends, family – but we people here are still going.

“So from this day forward, let’s try to work together,” he said. “Let’s talk to each other and remind one another we have to wear a mask and social distance. Let’s all work together as one and help another.” 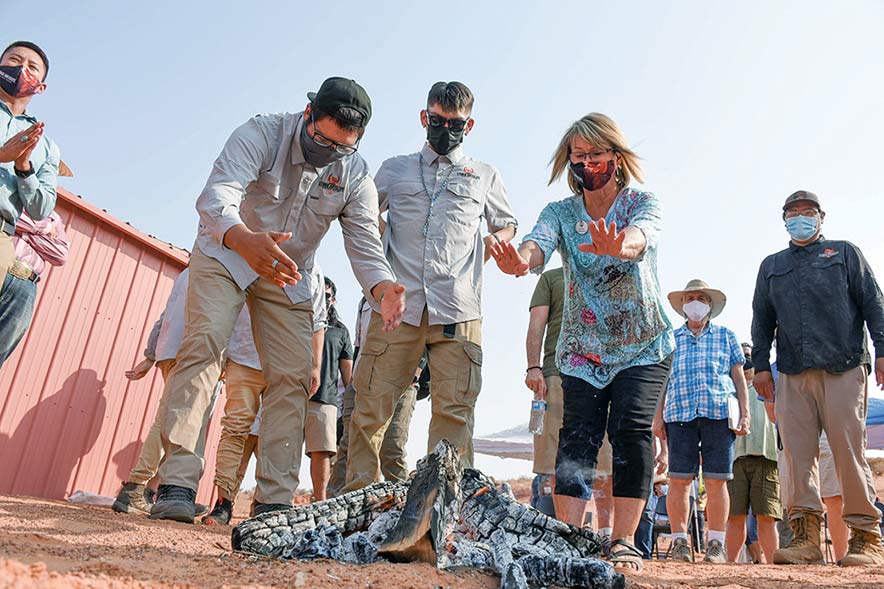 Navajo Times | Krista Allen
Judy Franz, executive director for the Page-Lake Powell Chamber of Commerce, along with Diné tour guides from Dixie Ellis’s Lower Antelope Canyon Tours, bless themselves with flat cedar smoke during a reopening ceremony at the entrance of Antelope Canyon in LeChee, Ariz. on July 12.

President Jonathan Nez on July 6 signed a bill that repeals several restrictions put in place last year because of the pandemic. The bill also rescinded the closure of tribal land to visitors.

“As the sun comes up on this reopening of Antelope Canyon, I am happy,” Young said in an interview with the Navajo Times t’áá Dinék’ehjígo. “I’m happy the canyon is open for business.”

Kenneth and Emily started Ken’s Tours 29 years ago in 1992 with only a folding table and a chair.

“After we were done, we folded it up, put it in the truck and took it home,” Young said in a previous interview. “It was like that for quite a while.

“I had to go to the (Bureau of Indian Affairs office) because they closed that area up (by putting) a fence (up) when a highway (was being installed), they told everybody to leave,” he said.

A man camp – used by Navajo Generating Station workers at the time – was in the area.

When State Route 98 was being constructed, Ken’s Tours was told to move out so a fence would be erected alongside the highway.

“When (that happened), I asked for (our site) to be opened back up for business,” Young said. That’s how we got back in and restarted.”

That brought back memories for the Young family before he said a prayer at the entrance of Tsébii’ Hazdeestas-Tsé’ésdooltas on the morning of July 12.

Holy people in the canyons

“You don’t want to distract them,” he said. “You call them ‘Tsé Yáłti’ and ‘Tsé Naajiin.’ Those are the holy people (that) live in there. So when you holler, yell, your voice goes in the distance. It’ll echo and it’ll take your voice and things like that.

“So just have respect for it when you’re around it,” he said. “Say a little prayer for yourself and then go in.”

Dixie Ellis, owner and operator of Dixie Ellis’ Lower Antelope Canyon Tours, said even though the holy people live there, she and her siblings used to herd their family’s livestock down the canyon.

Ellis is the sister of Kenneth Young.

“My mom (the late Sally Young) used to tell us, ‘Don’t go down that canyon,” said Ellis, whose tour operation is located next to Ken’s Tours. “You might fall in. If you go missing, you won’t know where you’re at. And you’ll be sitting in the canyon.’

“My sister used to carry a small radio with us, and we’d carry it around with us (down the canyon),” she said. “We herded sheep throughout this whole area.”

Ellis said she was part of the Young family-owned tour business before the siblings opened their own respective businesses.

“The Antelope Canyon tour operators are one big family,” said Amelia Littleman-Kaisem, Kenneth’s and Dixie’s niece, who herded sheep around the area with the Youngs when she was a child.

There are a total of five tour operators in Antelope Canyon.

“When we started doing the tours, that’s when I learned how to appreciate what you have,” said Ellis, who started her company in 2013. “I’m thankful for everything.”

Across Page, mask mandates have eased, restrictions have lifted, and business have reopened as usual.

Throughout the pandemic last year, it was largely up to city officials to determine what restrictions to impose to slow new infections. But that’s not so for the Navajo Nation as mask mandates are still in place.

The reopening of the tribal parks with 50% capacity comes with rules. Tour operators are required to use masks for both vaccinated and unvaccinated people. And tour operators must require all visitors to observe social-distancing rules, even as capacity limits are lifted in the future.

Opening day was a hassle for both Antelope Canyon Navajo Tours and Tsébighánlini Tours, both of which work together.

“Other than that, we got everything together for all of our customers to see and read,” said Brenda Begay, who manages Tsébighánlini Tours. “Seating-wise too, trying to keep everybody apart too –keep your distance. And just obeying all the laws and regulations that we have to put through.”

The employees for both companies said the 485-day shutdown took a toll on everything in the Page-Lake Powell area.

“For our company, being shut down it really affected us because we really helped our employees out all the way until we could – until we ran out of funds to assist them,” said Jaslynn Begay, the marketing manager for Antelope Canyon Navajo Tours.

“Then we helped them out with getting unemployment,” she said. “If they needed help with groceries or payments, those types of things we tried our best to help our employees with.”

Begay said the employees’ voices soon became louder saying they wanted to go back to work.

“We figured that all the tour operators in the area come together, and it was time to visit Window Rock,” Begay said. “That was something that wasn’t ever done. Everybody was on their own, but with COVID-19, that helped the Lake Powell Navajo Tribal Park work together collectively.”

Begay said she believes working together collectively toward a common goal, that’s what’s reopened the parks.

“The employees were very vigilant in trying to get this place reopened,” he said. “A year and half, 485 days, the count that the parks have been closed.”

Brenda Begay said the tour operators worked hard to reopen the canyon while many others “just talked about” the idea.

“We actually went to Window Rock, and we walked the walk,” she said, “and the president came out one day prior to the deadline and finally signed the legislation (that would open the parks). This is going to be written in history many years from now.”