However some events may be absent because of budget restriction amid the ongoing pandemic, but others will remain.

Board president of the association, Kyle Tom, asserts that Gallup Inter-Tribal Indian Ceremonial will happen and the association is working with the limited resources to make this year’s ceremonial a memorable one.

The ceremonial was canceled last year because of the virus.

Some of the confirmed events for this year’s gathering, thus far, are the art show, open rodeo with junior and ladies rodeo, a wine gala on the opening night and amphitheater dancing. 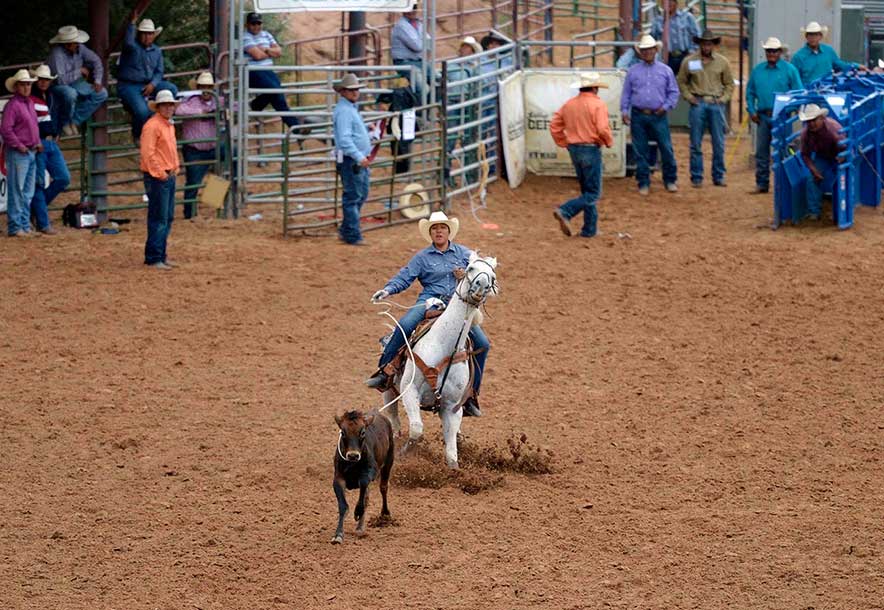 File photo
Fort Defiance cowgirl Serna Dahozy ropes her calf in 13.56 seconds at the 2019 Gallup Intertribal Indian Ceremonial Rodeo. The all-open rodeo is one of many events scheduled for this year’s Ceremonial.

“The support we’re getting is amazing,” Tom said. “The interest on Facebook, all of the locals … it’s almost like a family reunion for many families and the community interest is there. It makes us so honored that we get to put this event on for families, to fill that void that was missed out last year.”

One of the biggest challenges the association faced over the years was time.

It wasn’t until the beginning of July did the board members confirmed that the ceremonial would take place this year, giving them only five weeks with minimum funds to organize what would usually be a million-dollar event that took a year to prepare for.

“We’re going to sponsors not really knowing what to expect,” Tom said. “But all the sponsors we approached so far has been able to do their previous amount, if not they were able to do something at least. We hadn’t gotten anybody saying no and so the more we raised, the more we’re able to do is what its basically come down to this year.”

Coping with a pandemic

It has been a trying process for the board members as well as for other organizers, but they would often receive encouraging messages from the public about the gathering, about the fond memories made there and how more could be made this year.

“When you get those kind of messages and that kind of out reach, it’s just really special,” Tom said.

There have been some concerns though about safety regulations because of the virus. It was unspecified if mask mandates would be enforced, but Tom encourages everyone use their best judgment to keep one another safe.

As the date for the event draws closer, Tom encourages everyone to listen for news of the gathering in media or social media. Events may be added or dropped depending on what they can afford, but Tom encourages people to come out and continue the near 100-year-old traditional gathering.

Tom said working on this project has been surreal and to be part of a tradition that has lasted so long and one that he knows is near to everyone’s hearts.

“It (the gathering) is apart of people’s families,” Tom said. “Whether they actually participated in one of the contests or they just go every year, they look forward to seeing – it’s just a highlight. It’s something familiar, something unique to our area and it’s just a tradition that’s 99 years in the making.”

The board is expecting a record turnout as recent events in the Gallup area have sold out to spectators. They expect the gathering to be no different as Tom speculated many people have missed the ceremonial and after a year of being home, everyone is eager to return to what was once a yearly event.

Tom also expresses his thanks to all the association sponsors and the people who have left encouraging messages as him and his team prepare for the coming anniversary.

“We’re going to be a bit different but we’re also going to bring back the familiar stuff that everybody loves,” Tom said. “We encourage everybody to be safe but to also have a good time, so just keep on our social media, keep on our promotion that’s coming out and the various media outlets because we want to see everyone at red rock park.

“And we thank everyone for the support; we can’t do this without everyone’s support.”