Welcome back to the flea market! Nation gives the green light to roadside vendors 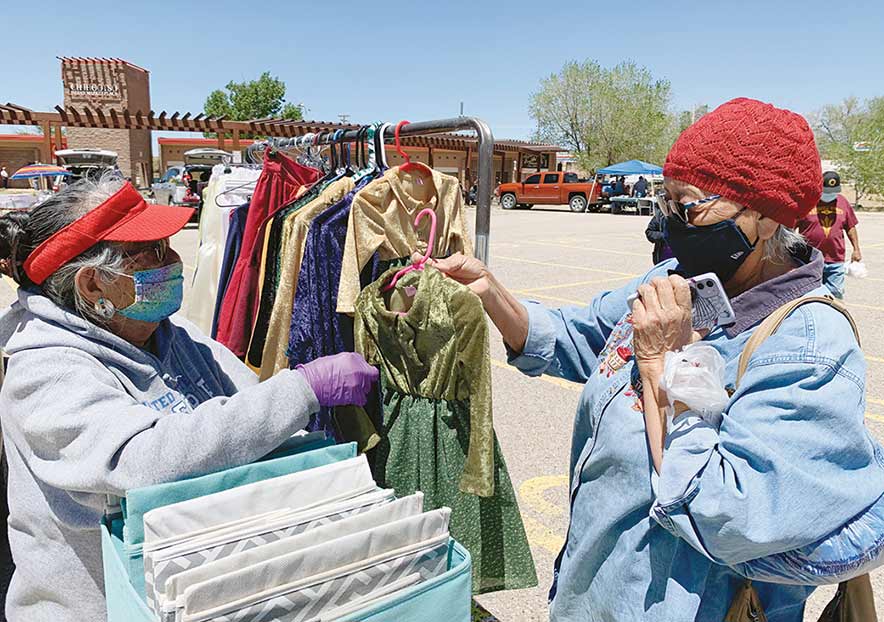 “It’s like going to the fair again!” sighed Nasbah Cooke contentedly as she debated whether or not to buy a cute traditional dress for her granddaughter.

That seemed to be the prevailing sentiment as customers enjoyed the warm weather on the second day the Window Rock flea market — along with roadside stands across the Navajo Nation – was officially allowed to open after being closed for over a year due to the COVID-19 pandemic.

It was still a sparse crowd for a weekday in late May, with only seven booths open and maybe 20 customers, but the metaphoric light at the end of the tunnel shone as brightly as the noon sun.
“It’s taken a long time,” said Claudia Tapaha, manning a booth selling graduation gifts and movie CDs.

For some vendors, like construction worker R.J. (he declined to give his last name), the flea is a “side hustle.” But for Tapaha, it’s a living.

Before COVID hit, she was clearing $200 a day at Window Rock and another site in Fort Defiance. When the tribal government shut down roadside vending in the spring of 2020, she thought she could get by for a few months on her savings — but then she got her electric bill.

“With two grandkids going to school online, it went way up,” she said. “Thank goodness my relatives dropped off firewood so I didn’t have to use the electric heater. We wouldn’t have made it.”

Tapaha was ready to sell Monday, the first day open-air booths were allowed to reopen, but said there seemed to be some confusion about the new public health order, announced by President Jonathan Nez late last week.

“I came out here and a lady said, ‘No, they’re not open yet,’” she said. “Then this morning my daughter called me, and then my sister, saying they heard it on the news and in the Gallup Independent, so I came back out, and there were already people set up.”

“I hope it stays open,” remarked David Yazzie of Tsaile as he rifled through Tapaha’s movies. “There’s things here you can’t get at Walmart.”

R.J., who finds used items at garage sales, fixes them up and resells them, admitted he had tried to get around tribal mandates during the pandemic by setting up just off the rez in Tsé Bonito, New Mexico. But then that got shut down too. 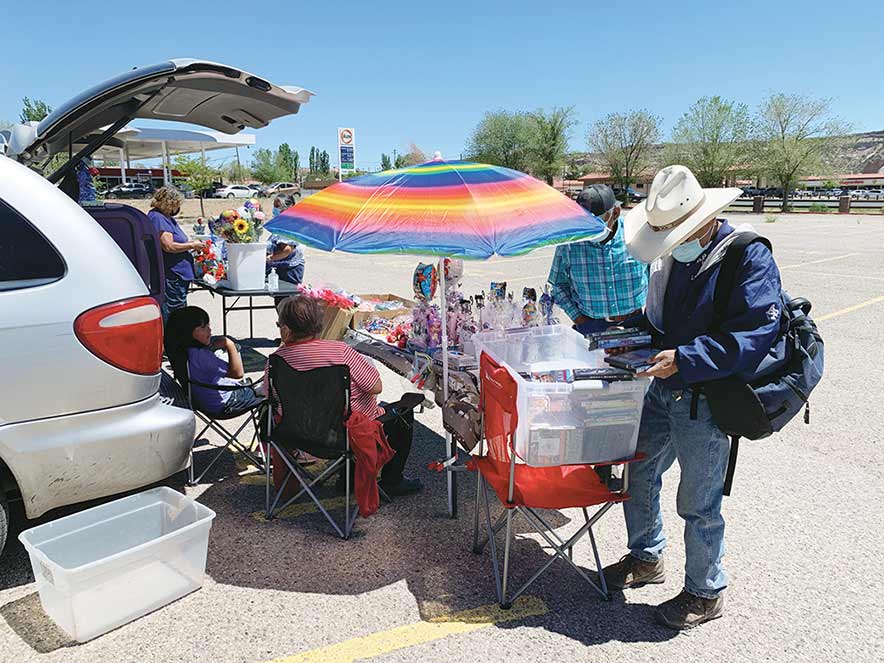 “Some lady, I guess she was from NOSHA, came by with two police and said, ‘You guys have to leave, there’s too many of you,’” he recalled. “I guess they were afraid we were spreading COVID.”
When he read in the Independent Monday that the vendors were allowed to reopen, “I was very happy about it,” he said.

Also happy were the restaurateurs of Mutton Alley, who were doing a land-office business with the flea market customers.

“It’s nice to see all the old and new customers come back,” said Lateresa Harvey, who was manning the register at Ed’s Café. “Business is finally picking up.”

There were a few caveats: the vendors were required to have hand sanitizer on hand and wear gloves and masks, but no one was complaining.

Cooke, who is a jewelry vendor as well as a customer, and quite a social elder to boot, said the impact on her went far beyond the economics. 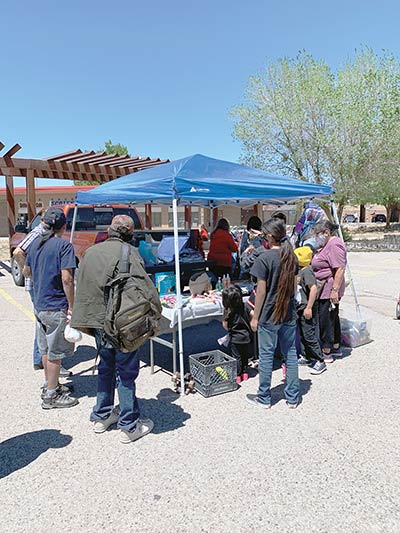 “I could have sold online,” she said. “A lot of people I know sold online and did OK. But I like being out here talking to people. That’s how you make friends.”

R.J. said there’s one way to make sure the flea market stays open and regulations continue to relax.

“Everyone has to get vaccinated,” he said. “I’ve had my second dose. Have you?”