Dogs and kids, hitchhikers and Code Talkers: Reflections on 16 years with the Times

This will be one of the last stories you will read with my byline in the Navajo Times.

After 40 years in journalism, including 16 at the Times, I have decided to retire. 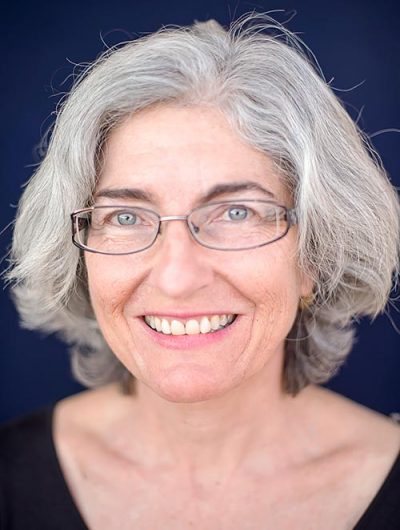 I was already 46 when I followed my husband to Chinle, where he had gotten a job teaching high school music, in July of 2005.

Eric had reconnoitered the area in April, and come back to our home in Logan, Utah, to give a glowing report.

When we arrived in a Penske truck in early July, with all our possessions, two cats and a dog, the scene was much different. There were no flowers, just dusty sagebrush and saltbush and a few wisps of cheatgrass.

The “river,” which turned out to be the De Chelly Wash, was bone dry. Only the rock formations were as he described.

Nevertheless, we furnished our little apartment in teacher housing and settled in for what we hoped would be a grand adventure. We never discussed how long we would stay, but I don’t think either of us expected it would be our last stop before retiring.

Although the Chinle school district pays better than most, we could quickly see life was going to be a struggle on a first-year teacher’s salary (it was Eric’s first teaching job after a long career as a landscaper and then going back to finish his degree) and I was going to have to find a way to contribute to the household income.

I had been a journalist since 1980, with brief hiatuses for VISTA, the Peace Corps and a Catholic mission, but I didn’t expect to find work in my field in Chinle.

After a disastrous attempt at substitute teaching, however, I decided I had to at least try to land a reporting job.

I had been buying the Navajo Times, the Gallup Independent and the Flagstaff Sun at the grocery store. They were all good papers and, though their offices were far from Chinle, I thought maybe they would appreciate some correspondence from the heart of the reservation. I sent some clips with a cover letter to all three.

I never heard from the Independent. The Sun offered me an occasional freelance gig when they needed something covered.

The Times — the one paper I had expected to ignore my application, since I’m not Navajo — called me in for an interview.

After admitting he wished I were “a young Native person,” editor Duane Beyal offered me a regular stringer position that could possibly evolve into full time if they liked my stuff.

I practically floated home. I hadn’t realized how much I had missed working for a newspaper.

Within a few days, I had my first story, suggested by my husband. “Aunt” Jan Reed, the beloved principal of Chinle Elementary School, had been found dead in her apartment just as school was about to start, the victim of an aggressive cancer she had been keeping secret.

It was a tragedy for the school, but turned out to be an awesome first story for me. Reed had led an interesting life, and everybody had warm memories of her. It ended up on the front page.

I worried I wouldn’t find two stories a week, as Duane had requested, in tiny Chinle, but I was wrong. There were stories everywhere, and the more I wrote, the more people brought me.

Before long I was outproducing the full-time reporters. In February of 2006, publisher Tom Arviso Jr. offered me a full-time job with benefits, and I’ve been there ever since, evolving from Tséyi’ Bureau reporter to copyeditor to assistant editor, and even filling in as interim editor for nearly a year.

There was a learning curve, naturally. Arguably, I’m still on it. I knew nothing about Native Americans when I started this job, and now I know a little, like how trust land works (sort of), not to call traditional clothing a “costume,” and why the Washington Football Team’s former logo is offensive.

What Duane called my “rez moment” (paraphrasing terminology from the NFL) happened early on.

I was covering a public meeting on Hopi, underestimated my travel time and arrived nearly an hour late. I did the polite thing by Euro-American standards: snuck in as quietly as possible so as not to disrupt the meeting, and took a seat in the back.

The next day, Duane got calls from three or four Hopis demanding to know why I slithered in like a snake and didn’t introduce myself.

I learned I should have shaken hands with all the leaders, even if it meant disrupting the entire meeting. Even today I have a hard time doing this, but I try not to slither into places like a snake.

I’ve made plenty of other faux pas along the way, and while I’m sometimes angrily called out, more often someone pulls me aside and patiently explains to me what I did wrong and how to do it right, which I unfailingly appreciate even while blushing.

Over the years I’ve gotten to cover many fascinating stories. I think my least favorite are the thorny political controversies, although they have to be covered, and my favorite are the little quirky tales that take me deep into the rez. 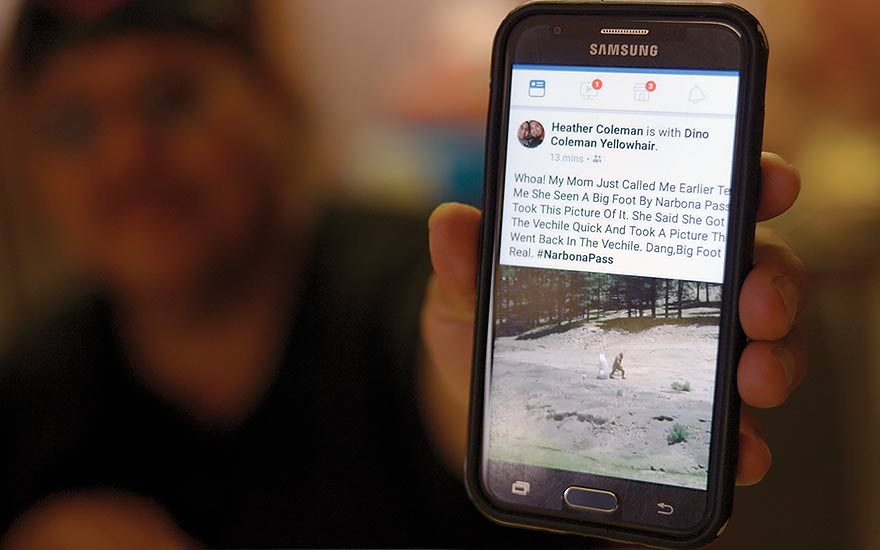 I’ve enjoyed chasing Bigfoot with Frank Smith in Sanostee, being reprimanded for petting sheepdog puppies by Betty Begay on Skeleton Mesa, strolling through a 100-year-old apple orchard at the bottom of Canyon de Chelly with Lloyd Draper, riding the range with Gene Shepherd and learning why there’s a larger-than-life-size painting of Mickey Mouse on a rock near Indian Wells.

Everyone on the rez has a story, as I discovered when I started asking hitchhikers to tell me their tales in exchange for a ride, leading to my popular “Hitchhiker Diaries” series.

I’ve met many notable Navajos through my work, including all the living past presidents. When I first came to the rez in 2005, I believe there were about 20 Navajo Code Talkers still living, and I interviewed most of them over the years. Now there are four.

I particularly miss Teddy Draper Sr., whom I considered a friend, and Roy Hawthorne Sr. Both of these men had minds like steel traps almost up until they passed away in their 90s, but more than that, they knew how to tell a story.

It pains me that I’ll never be able to call them up for historical research again. A lot of knowledge died with them, and I should have made more time to pick their brains.

Then there were the big international stories, which had a special impact on the Nation — climate change, a global pandemic and a would-be dictator whom the Navajo vote helped to oust.

I also watched sadly as the fate of newspapers worldwide slowly caught up to the Times. Since 2005, our circulation has gone from 25,000 to about 14,000 as more and more Navajos get their news electronically from other sources or from our website, which we have not yet monetized.

By far my favorite experience of the past 16 years was my chapter project, when I spent two years traveling to every chapter on the Navajo Nation and writing a weekly column about it. It resulted in a book published by Salina Bookshelf, “Exploring the Navajo Nation Chapter by Chapter.” 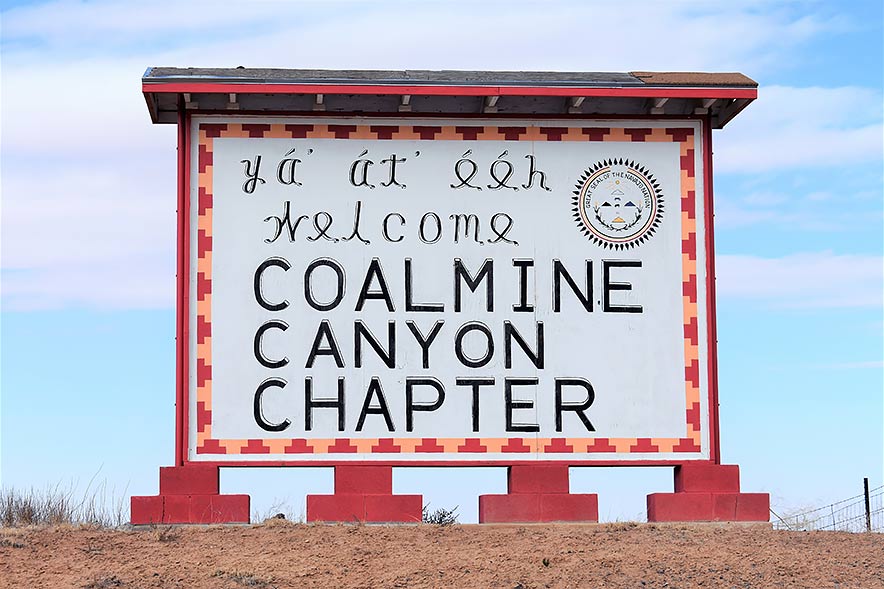 I was able to experience the immensity and diversity of Diné Bikéyah and talk to both chapter officials and the ordinary people who live in every corner of the reservation.

Again, it saddens me to think that five of the people I interviewed for that series, that I know of, have passed away.

I can honestly say the Navajo Nation taught me to love dogs and children, neither of which I had a whole lot of use for before we moved here.

Getting to know my husband’s students and hear their stories really softened my heart toward young people. I cannot imagine the hardship some of them are going through at home, and yet they show up every day with a smile, ready to learn and play their instruments.

I hope music gives them a lifelong means of expression that will brighten their days long into the future, as it has for me.

Sadly, five of them are gone now too, and unlike the Code Talkers and elders I interviewed, far, far too soon.

On Labor Day, 2005, I had a life-changing experience. A scrawny, mangey puppy showed up on our doorstep and wouldn’t leave. 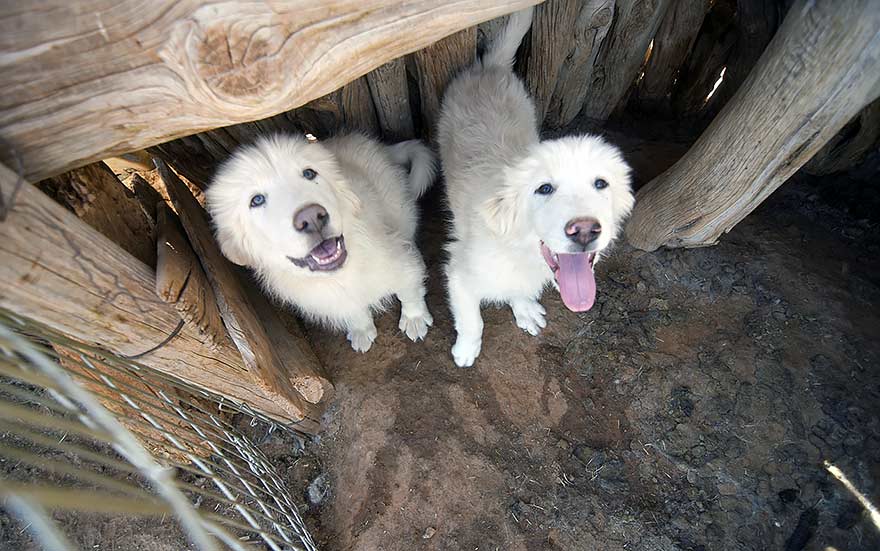 It was obviously very ill, throwing up and pooping everywhere. My inclination was to ignore it, but my soft-hearted husband brought him in and named him Rusty.

After several frantic phone calls, we found a vet in Grants that was willing to take a look at Rusty on the holiday, so we jumped in the car and drove two hours.

The vet diagnosed parvovirus — something we had never heard of but with which we have become all too familiar since — and kept him on intravenous fluids for a few days until he was out of the woods.

As we were retrieving him, the vet said, “You’ll end up with four or five pets before you leave the Nation. All white people do.”

We pooh-poohed the idea but it turned out to be true.

When discussing what to do about Rusty, someone suggested the Blackhat Humane Society, which helps people foster stray animals and find homes for them. We have been involved with Blackhat for 16 years now, and I’m the current president.

Eric and I have personally rescued and placed 142 pets so far, and Blackhat averages a few hundred a year.

Life on the reservation hasn’t always been easy, but there’s a rootedness and simplicity to it that really resonates with me. As with any culture, there are things I find hard to accept about Diné ways, and things I really love.

The idea of balance, that you need a little darkness to understand the light, speaks to me and has helped me deal with daily life.

When I have been very ill, I have turned to hataalis and been helped. I’ve been privileged to have been invited to quite a few different ceremonies over the years, and always came away feeling blessed.

I’m glad I’ll be around Diné Bikéyah for a few more years, while my husband continues to work. I’m sure I’ll enjoy it even more now that I have time to explore.

I sincerely hope the people I’ve met at and through my work continue to want to spend time with me after I leave the paper. I may no longer be a part of the Navajo Times, but it is part of me.