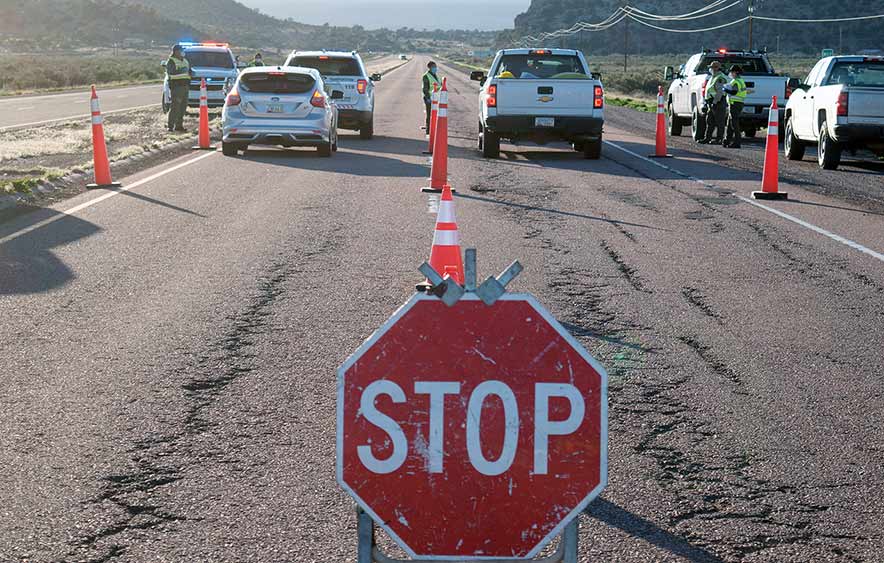 Navajo Times | Donovan Quintero
A checkpoint is set up on a road into Gallup.

Today marks six days since the so-called “Most Patriotic Small Town” in America locked itself down in an effort to prevent the spread of the coronavirus. Outgoing Gallup Mayor Jack McKinney on April 30 asked New Mexico Gov.

Michelle Lujan Grisham to intervene and lock down the city because it was overrun with infected people. By last Friday, Gallup had 1,027 confirmed cases, with 19 deaths, according to the New Mexico Department of Health. Grisham invoked the state’s Riot Control Act and ordered the New Mexico State Police to block all highways and entrances leading into the city. State Police and the National Guard converged on the city on Friday and began blocking off the roads at noon. Access to the city of 22,000 was cordoned off. Only essential workers, semi-trailers and city residents with proof of residency were allowed into the city.

Travelers driving southbound on U.S. Highway 491 wanting to get to Interstate 40 were denied access and told to take an alternate route through Twin Lakes, Crownpoint, and Thoreau, a 78-mile detour.

The interstate is less than two miles from the state police checkpoint. Some water haulers coming from the reservation said they were also denied entrance, but New Mexico State Police spokesman Dusty Francisco said police allowed them access to a watering station located near the Gallup Community Pantry.

On Sunday, newly sworn-in Mayor Louis Bonaguidi asked Lujan Grisham to extend the lockdown, which was scheduled to be lifted Monday, until today (Thursday).

The closure came at a time when many Navajo people receive state and federal assistance checks and go to the city to shop for groceries, wash clothes, get water and obtain hay and feed for livestock. Even with the Navajo Nation’s third 57-hour curfew in effect, the closure caused many people to travel to other border towns like Farmington, Holbrook, Winslow or Flagstaff to purchase necessities.

As of Wednesday morning, the number of confirmed cases of the virus in McKinley County was 1,274, with 25 deaths.

On Monday, Gallup Water and Sanitation Director Dennis Romero said ranchers and people wanting water could get it at no charge at three areas: Red Rock Park, the west port-of-entry, and Chichiltah Chapter House, during the second emergency lockdown. Water hauler Paulene Jones from Ya-Tah-Hey was at the water station on Monday. She filled a 300-gallon water tank, which, she said, was for her livestock.

She added she only went to get water “every other week.” Gallup City Manager Maryann Ustick said Monday the city would most likely not ask for another extension of the lockdown.