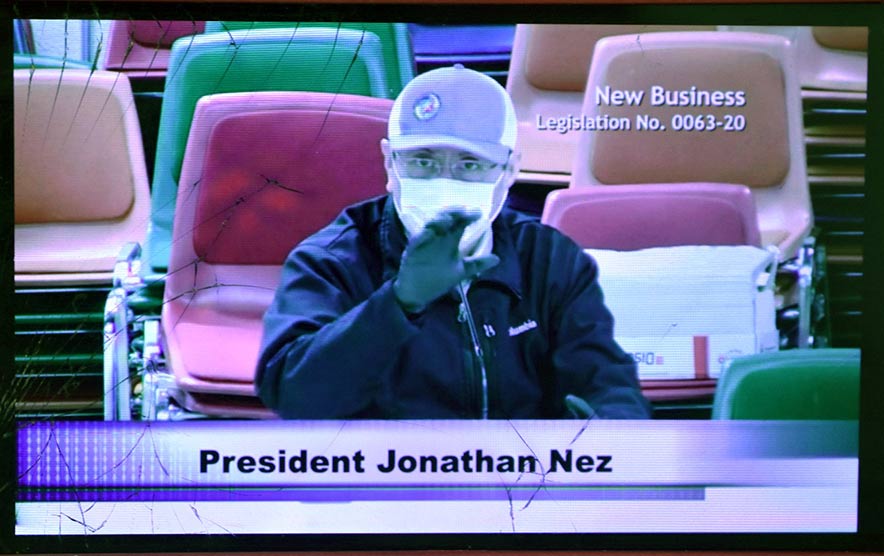 Navajo Times | Rima Krisst
President Jonathan Nez provides an update to Council on March 25 regarding ramping up the Nation's emergency response to COVID-19.

Incident Commander David Nez delivered a high-level presentation to the Naabi’kiyati Committee last Friday about the Navajo COVID-19 Health Command Operation Center, sharing broad-brush talking points that were mostly common knowledge, much to the disappointment of delegates who were expecting an informative written report.

“If you’re going to report to Council, you want to be prepared,” said Delegate Eugenia Charles-Newton. “Where are the statistics? Where’s the data?”

Nez said that running the Command Center operation was a lot of hard work. “We’re trying our best, to meet the needs of the Navajo Nation, particularly the priority, the people who are getting sick from COVID-19,” he said. “Our role and our responsibility is to help the Navajo people.”

Much time is spent coordinating with hospitals, medical staff, FEMA, the National Guard, Army Corps of Engineers, and other entities, said Nez. While Nez spoke to the importance of accountability and paper trail in his operation, he provided none to delegates. He shared no information relating to number of people served by the Command Center in what locations, how and where epidemiology teams were deployed for surveillance and tracking, how much PPE supplies have been secured and distributed, or how much money has been spent.

“It’s been very difficult to get information out of your command center,” said Charles-Newton. “Who is actually in charge? My concern is that the Command Center is not in control and is bottlenecking everything.”

Nez explained while Navajo Department of Health Director Jill Jim was the Command Center’s chief executive, President Jonathan Nez was the final authority and “all of the executive branch” has moved forward to support the operation. He suggested that said Council also has a role, such as passing the emergency funding to the operation itself.

“Where are all the funding and donations going?” asked Delegate Kee Allen Begay. “How are chapters who are receiving donations being selected? How are they prioritizing?”

Begay suggested there’s been no coordination between the president’s office and delegates regarding things like food, water, and PPE distributions. “It seems we’re having a power struggle,” said Begay.

Begay also stressed that mitigating the spread of COVID-19 should be the Command Center’s first priority.

Charles-Newton said that when chapter houses were closed, the first line of communication in communities was cut off and things have only gotten worse. “Our people, our constituents are asking us when are they going to get help?” she said. “When you bring doubt to a command center you bring doubt the the assistance which should be in place.”

Delegate Amber Kanazbah Crotty asked Nez what the process is for accountability with “213” forms that are submitted to the Command Centers for all COVID-19 relief and assistance requests.

“Every day I speak with Northern agency CHRs and DALTECS asking them if they received PPEs and we receive conflicting information from the Command Center,” she said.

Crotty also complained about the dearth of data analysis when it comes to the COVID-19 numbers and projections. “I’m very concerned about the data, how its being collected and what the interpretation is,” she said. “I would like to see an independent body, or an individual with a high depth of knowledge to give out information.”

She said transparency is needed in data collection and reporting. “We want clarity over what to expect,” she said.

Delegate Thomas Walker asked Nez specifically what the projected surge and peak of the curve will be for COVID-19 cases on the Nation. “Where are we on the chart?” asked Walker. “That is really important.”

Delegate Daniel Tso said he wanted to hear “actual information.” “General statements do not satisfy the intent of the committee to request a report,” said Tso.

“What was received, what was distributed and what’s left in your inventory? Where are those items stored at?”

Tso complained that some CHRs who did not have proper PPE have been exposed to COVID-19, and that chapter staff were asked to sign liability waivers. “If anything they should be given added health insurance coverage,” said Tso. “By having them sign waivers you’re tell them ‘you don’t count.’”

“That is unconscionable,” he said. Tso said Command Center protocols should have been established on day one and that an emergency command should be providing detailed information pertaining to the trajectory of the pandemic. He also requested a breakdown of COVID-19 cases by chapter, not counties.

“What I’m not seeing is a medical doctor or even somebody who has experienced a pandemic,” said Tso. “That’s the type of detailed report I would rather be listening to.”

“This is not a town hall’

Nez acknowledged there has been a shortage of PPE supplies, especially early on. He said he’s grateful for all of those people, including employees who have “taken the initiative” to make their own masks.

“If everybody can participate and assist, I think we can be able to flatten the curve,” he said. “We’re looking forward to every support we can get to help our Navajo people.”

Delegate Elmer Begay empasized that goods and services need to be delivered to families most in need. He asked how the chain of command down into the field was being implemented.

Some longtime employees such as CHRs were being intimidated by Command Center staff, said Begay. “The communication under your leadership at the Commander Center is very poor,” said Begay. “We never see you.” Nez said the Command Center is still working on establishing communication and coordination as well as guidelines and procedures. “I can only work with a few people,” said Nez. “I can’t cover the whole Navajo Nation.”

A frustrated Crotty interrupted Nez with a point of order. “I’d like my questions to be answered,” she said. “I’m still waiting for a reply. What I’m hearing is over-generalizations. This is not a town hall. These are pointed questions and we want answers.

“It’s like a vacuum,” said Crotty. “There’s no accountability.” She recommended creating an independent, unbiased entity made of experts. “With the size of our nation and how unique it is, we need individuals who have the ability and the capacity,” said Crotty.

Nez said he could get back to delegates by email with specific responses to questions after consultation with his staff.

Delegate Otto Tso said he’s been hearing from constituents that 213 requests are not being responded to. “They’re trying to figure out what’s going on,” he said. Tso said communication needed to be improved in order to work collectively with the chapters. He asked why official information was not coming directly form the Command Center.

“The press releases should be coming out from your Command first,” said Tso. “The way the press releases are going out is indicating the president’s office is in control of the health command center.”

Delegate Carl Slater said he thinks many of the protocols that are in place are in fact barriers to obtaining information. “I’m not sure I’ve ever received a 213 back with a response,” he said. “It’s definitely a farce at this point to assume the Command Center has any sort of independence,” added Slater.

He shared that employees within the Command Center are expressing they are at risk of being penalized if they share information or reach out to delegates. “There is very limited democratic oversight over how this operation is being delivered,” said Slater. “It’s infuriating.”

He said while delegates are trying to help with distribution of resources to their communities, little information is being shared with them. “What’s the most important part of a crisis? Communication!” said Slater. Slater said a comprehensive plan is needed, something he already requested a month ago. “We need some serious communication between the branches that leverages and integrates the assets available,” said Slater.

Slater asked for clarification of the role of the executive in managing the relief effort, adding that delegates should not have to be afraid that their communities’ resources are based on political calculations. He recommended a “9/11” style commission” be established that would be in charge of a full accounting the Command Center’s preparedness and response.

Walker said all three branches of government need to unify and immediately discuss mitigating the COVID-19 spread before it gets worse. “We need leadership and intensive focus, with the utmost concern being saving the lives of our people,” he said.