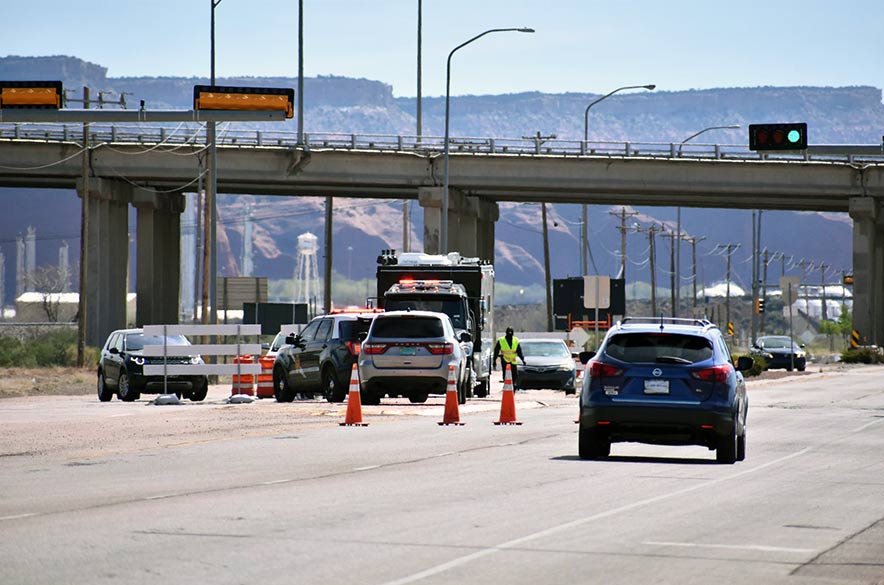 Only a few cars were funneling through Gallup’s eastside Historic Highway 66 roadblock checkpoint on Sunday morning.

For the past month, local, tribal and state leaders have struggled to come up with a plan to curb the alarming increase of COVID-19 cases in Gallup and McKinley County.

“The truth is now one in 70 people in our county has this virus,” said McKinley County Commissioner Bill Lee. “Those are crazy numbers.”

In response to requests from Gallup city officials, Gov. Michelle Lujan Grisham on Friday authorized a 72-hour lockdown of Gallup that came to a surprise to many and went into effect abruptly at noon when roadblocks with checkpoints were erected at various entrances to town.

Huge traffic bottlenecks developed as shoppers, residents and business owners scrambled to prepare for the 12-noon lockdown. At 11:30 a.m. there were still long lines at stores and ATM’s.

The closure of the city was to last until Monday at noon.

Lee explained that the lockdown was coordinated last Thursday with support of Navajo Nation president’s office, the governor of Zuni, the city, McKinley County, the Department of Emergency Management, law enforcement and the National Guard.

In order for Lujan Grisham to enact the Riot Control Act, a request had to come from the Gallup mayor, the McKinley County Commission or the sheriffs, said Lee.

The governor’s team decided it was the best action to take and requested letters from the city and county to move forward, he said.

State Sen. George Munoz also supported the idea and Lee said he believes a letter of support was also provided by the Navajo Nation president.

“It was a collaborative idea,” he said. “The Nation was in support of the Gallup lockdown.”

Jared Touchin, communications director for the president’s office, confirmed that President Jonathan Nez “spoke to the governor about it on Thursday” and also on Saturday.

Lee added that all parties advised Lujan Grisham that the state would need to help those impacted by the closure by providing resources such as water and food.

He acknowledged the rollout of the lockdown was perhaps not done in the best manner but now that it is in place it’s been effective.

“Things are quieting down,” Lee said on Sunday. “I certainly have seen far less traffic in town, which is a positive step in terms of reducing large crowds and getting people to focus on only going out when its absolutely necessary.”

Lee said the lockdown could be extended for another three days.

However, Lee indicated Mayor Louis Bonaguidi is leaning toward extending the closure.

“I think that might be the right action to take,” said Lee. “There’s a concern that there will be a massive flood back into town and I think we kind of need to stagger that and make it more manageable.”

With the lockdown in force, all roads to into Gallup are closed and businesses are closed from 5 p.m. to 8 a.m. Vehicles may only have two persons.

Residents coming back into the city need to provide proof of residence. Exceptions are made for non-residents for emergencies and other matters relating to health and safety.

Lee said the city and county are also working to boost other measures such as making the wearing of masks mandatory.

“On Tuesday, we’re going to be giving store owners the power to do that if they want to do that,” he said.

While Lee agrees the feeling of the lockdown is a bit eerie, he hopes it will have an overall positive effect.

He said he went though a checkpoint into Gallup on Saturday and everything went smoothly.

“I was very impressed with the care and compassion the state police and the National Guard were using in managing the checkpoint,” said Lee. “There were trying to move people as quickly, efficiently and politely as they could.”

He said while frustration is high among everyone having to deal with the pandemic, it’s important to for people to be courteous to each other and especially to front-line workers.

Lee explained that the officers manning the checkpoints are all wearing masks and gloves and avoiding unnecessary contact.

Lee says he believes that some course of action had to be tried because until now it has been pretty much “business as usual” at the stores and big box stores like Walmart have been reporting record sales.

When you look at other communities across the state, that’s not been the case, he said.

“This is not going to go on forever,” said Lee. “It may be extended another three days. If that’s the case, I’m OK with that.”

Lee emphasized that everyone needs to do their part to help stop the spread of the virus.

“Until we can get these numbers to come down, please everybody, just stay home,” he said.