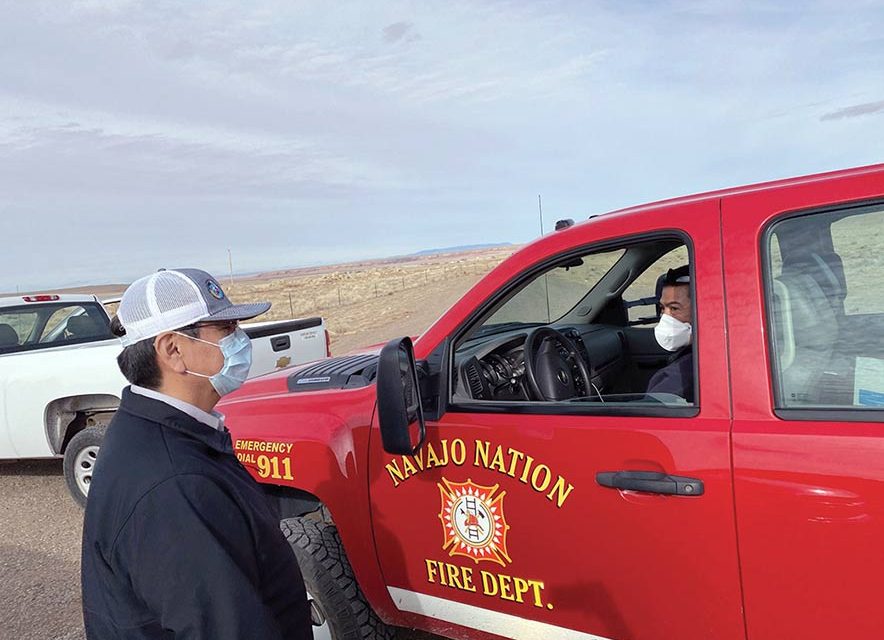 Navajo Times | Arlyssa Becenti
President Jonathan Nez talking with Fire Department Lt. Randy Frank near Chilchinbeto, Ariz. Nez made a surprise visit to the emergency operation center to see how operations were going and what supplies were needed.

Lt. Randy Frank, with the Navajo Nation Fire Department, is normally stationed out in Twin Arrows but on a windy Sunday afternoon he was on the road headed toward Chilchinbeto, Arizona, in his fire unit.

Frank, who is originally from Chinle, was one of three Navajo Nation Fire Department personnel that day conducting “special ops.”

These first responders had the responsibility of going to the “hot zone” of Chilchinbeto to deliver supplies, food, water, and gather medical information such as whether people need help filling prescriptions for other medical needs.

“I’m very concerned especially knowing how contagious this virus is going around,” said Frank. “But this is our job. We help the community. We help our people.”

In the first week of coronavirus hitting Navajo, the number of confirmed cases grew from two to 49, a 2,350% increase. Thirty of those are in Navajo County (which includes Chilchinbeto).

Follow these tips to stay safe and healthy right now.

There are seven in Apache County and six in Coconino County in Arizona and four in McKinley County and two in San Juan County in New Mexico.

By the time this paper hits the newsstands the numbers may have increase (see the map and graphic on www.navajotimes.com for the most recent updates).

The stay-at-home order first imposed on Chilchinbeto has since been extended throughout the Navajo Nation. 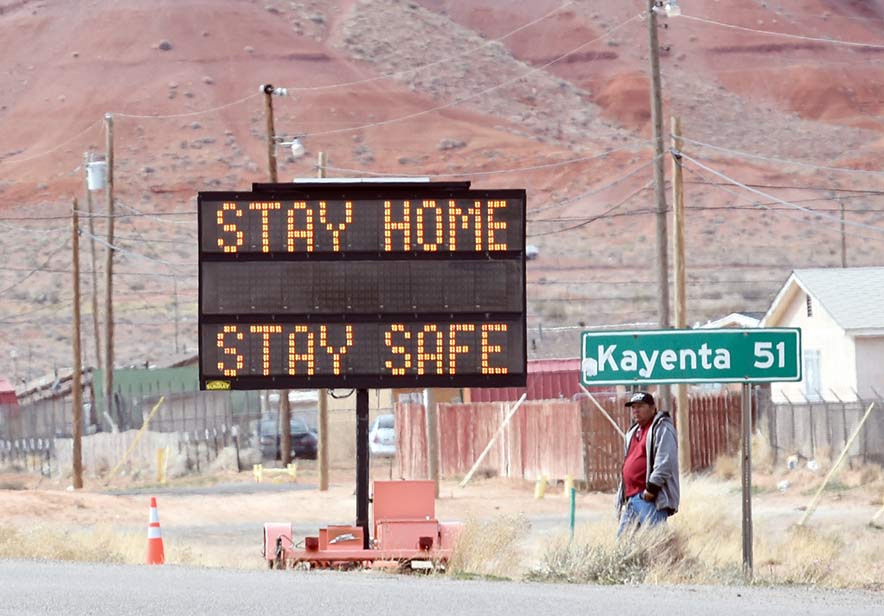 A hitchhiker stands near a road sign advising the community to stay home due to the coronavirus outbreak on Saturday afternoon in Many Farms, Ariz.

The NNFD personnel checked on 25 of 400 homes within the community Sunday.

Down the road from the turnoff to Chilchinbeto is Kayenta, where the Navajo Nation COVID-19 Preparedness Team emergency operation center is located, inside the old Department of Behavioral Health building. The building serves as a depot for donated supplies for affected communities in the area.

On the same windy day, Nyla Seweingyawma, prevention specialist, sat alone inside the EOC while food cooked in a slow cooker.

She said they had set up the night before and that morning they bagged up food to be delivered to the families in Chilchinbeto.

“You hear about (coronavirus) in the news of it being far from here and you never see it hitting home,” said Seweingyawma, “and all of a sudden it’s just down the hall from your work place. It’s scary because you don’t know who’s been exposed.”

President Jonathan Nez and Vice President Myron Lizer established the Navajo Nation COVID-19 team in February. There were no cases on Navajo then, but it was inevitable that the virus would make its way to the reservation.

Since then, Navajo leaders have updated communities through weekly radio forums, social media posts and going out in public to distribute brochures. They’ve held weekly meetings with the Indian Health Service, Department of Health and the preparedness team and opened Tuesday meetings for Council delegates.

While Seweingyawma sat inside, Nez with members of the Navajo Nation Christian Response Team unloaded a flatbed full of wood headed for Chilchinbeto.

Nez said he wanted to see how operations were going at the EOC and to also find out what other supplies were needed for the team and first responders, so he made a surprise visit Sunday.

“Our incident command post is delivering food and care packages to our Navajo people and relatives in Chilchinbeto,” said Nez. “They are working hard to keep our communities safe from COVID-19.”

It hasn’t been verified for sure just how this virus got into Navajo, specifically Chilchinbeto. Navajo Area Indian Health Service Chief Medical Officer Loretta Christenson said it is a tight-knit community with many different events happening there. Community members also do a lot of traveling, and the virus’s 14-day incubation time makes tracing it complex.

“We don’t have a conclusion of the very first event,” said Christenson. “We have made a lot of tracings from the group that were at many of the same gatherings.

“The next tier and third tier of tracing is still going on and we hope to have a pretty good map of what happened,” she said, “and where we need to go to keep a perimeter around this area.”

Theresa Galvin, logistics chief for the preparedness team, drove up to the EOC in Kayenta after taking food out to the fire department personnel. Her responsibility is to deal with supplies, work force, transportation, safety and facilities.

“She tells us what to do and we ask ‘how high, Theresa?’” said Nez.

On Sunday, Galvin had said they received 100 pallets from food distribution, and a truck load full of coal from Navajo Mine. By Monday she said they would be getting more donations of food and other perishables.

“As we are staging this and we have more communities larger than Chilchinbeto, we will obviously stage there too,” said Galvin. “We know this may be one of many that will have to happen.”

As someone who has been working directly with the Chilchinbeto area and its community members, she said there is a lot of misinformation out there. She said there are times when she herself had to set the record straight with strangers who were divulging false information.

“There’s a lot of ‘jinii’ out there,” said Galvin. “What we want is to ensure the safety and wellness of the Navajo people. That’s our objective and goal. Once people start spreading rumors and blaming other people, it doesn’t help.”

One rumor she heard was community members of Chilchibeto were going to be fined if they left the area and this, she said vehemently, is not true.

Other rumors include border and road closures, which Nez has said many times over would not and could not happen.

In the Kayenta area, Francisco said there are eight officers who are self-quarantined because of exposure. Two other officers had hit an animal with their vehicle and were home caring for their injuries.

Of the 15 remaining officers available in the Kayenta area, nine are on assignment at the Chilchinbeto checkpoints, and these are done in shifts. They are also due to receive 11 Fish and Wildlife officers and Navajo Rangers to help with the efforts in Chilchinbeto.

“We are trying to avoid having any other officers from other districts over there because then they’ll be exposed,” said Francisco. “We are trying to stay visible out there and make sure people are taking this seriously, and staying home if possible.”

Shawn Claw, facility maintenance officer from Chinle, was told he had to assist at the EOC in Kayenta. Of course, he was apprehensive because of all he’s been hearing and reading on the news and on social media but the main concern for him is the people of Chilchinbeto.

“I’m just worried about those folks and what they’re going through and their families,” said Claw.

Questions from the public may be directed to the Navajo Health Command Operations Center at 928-871-7014.