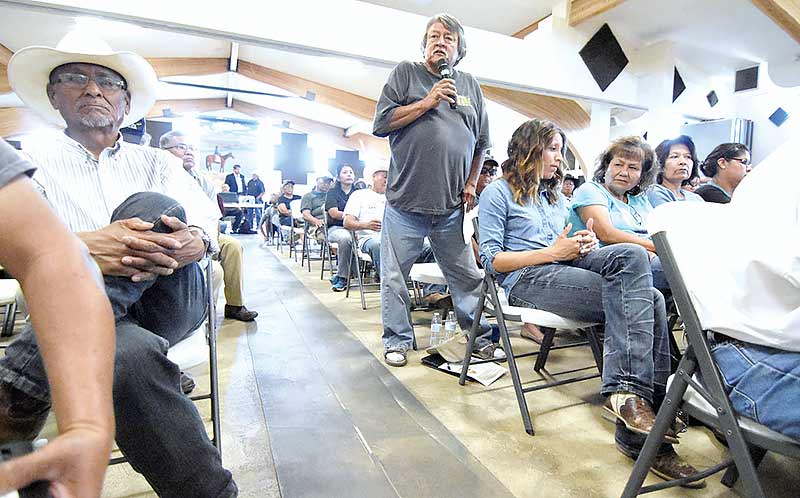 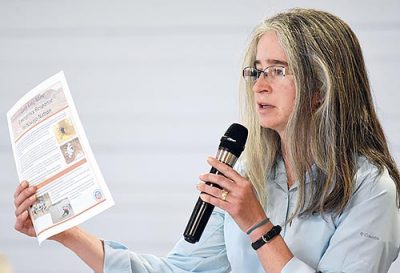 Remedial project manager Linda Reeves with the Environmental Protection Agency holds up a document while speaking at a meeting at Nenahnezad Chapter on Saturday in Nenahnezad, N.M. (Times photo – Donovan Quintero)

After finding oil in water tanks brought to Shiprock by the EPA to help relieve farmers affected by the Navajo Nation’s continued closure of the San Juan River, Navajo Attorney General Ethel Branch issued a strong statement to the federal agency: Get out! But leave your money.

“There’s oil in these tanks!” Branch yells in a video posted Wednesday on President Russell Begaye’s Facebook page. “We don’t trust the EPA to be here! They need to get out of our nation! Send the dollars directly here! Let us take care of these issues ourselves!”

Branch says in the video the situation was brought to the attention of an EPA representative and he “tried to discredit those individuals” who had complained about the water, “questioning their mental stability.”

EPA Region 6 did not respond to an email by press time, but Shiprock Chapter President Chili Yazzie said he met with Begaye and Branch, representatives from five Congressional offices, the BIA and EPA Wednesday morning and the EPA agreed to remove the tanks and trucks they had contracted from Triple S Trucking Co. in Farmington.

“We know that company brings tracking chemicals to the oilfields,” Yazzie said. “We told them we want nothing to do with those trucks.”

In the meantime, the BIA will step up water hauling from Albuquerque, and Begaye has ordered every water truck on the Navajo Nation to respond to the incident command centers, Yazzie said.

Also, “there are Navajo companies that have stepped forward willing to help,” Yazzie said. “I referred them to the incident command center. We’ve got people out here who know how to do some of this stuff, they should be getting some of the action.”

While their neighbors to the east have been pumping San Juan River water to their crops since Sunday, not to mention drinking it, canals were still closed on the Navajo Nation Wednesday and farmers on the northern edge of the reservation were relying on hay and water brought in by the U.S. Environmental Protection Agency, the BIA, the Navajo Nation and private charities.

President Russell Begaye, meanwhile, issued a press release stating the Navajo Nation has run out of money to continue testing the water and bringing hay and water to the farmers. He is asking the public for $500,000 in donations to continue the programs.

President Begaye declared a state of emergency and closed the San Juan through the Navajo Nation after the U.S. EPA accidentally allowed three million gallons of water laden with heavy metals to escape from an abandoned gold and silver mine near Silverton, Colo. on Aug. 5. The water flowed into Cement Creek and then into the Animas River, which joins the San Juan around Farmington and flows into the Navajo Nation at Tse Daa Kaan, N.M.

An 80-mile-long plume of orange-colored water made its way down the Animas and into the San Juan, fading to muddy brown by the time it reached Aneth, Utah, and reached Lake Powell last Thursday. Both the EPA and the Arizona Department of Environmental Quality say tests showed water at the mouth of the San Juan contained only the normal amounts of heavy metals and they expect no effect on Lake Powell.

The three-million-gallon plume, about 9.2 acre-feet, represents less than a millionth of the massive reservoir’s current 11.5 million acre-feet of water.

Test results from water samples taken between Silverton, Colo., and Mexican Hat, Utah, before, during and after the plume flowed through are now available online at http://www2.epa.gov/goldkingmine/data-gold-king-mine-response. The results for Shiprock show most heavy metals were back to near-baseline levels by Aug. 11; by the time the plume reached Mexican Hat, the increases during the plume were barely measurable (lead, for instance, went from 0.06 parts per billion to 0.08).

The New Mexico Department of Health and KOBTV got similar results, and the state opened the San Juan to all uses Sunday.

The Colorado Department of Parks and Wildlife says there have been no documented fish deaths from the spill and the independent Mountain Studies Institute found insects that live in the sediments under the river were still alive 20 hours after the release.

Begaye, however, has been holding out, saying he does not trust the EPA results and urging Navajos not to use the river until the Nation’s own results come back from the lab.

The EPA, which has taken full responsibility for the spill, says it has delivered one million gallons of irrigation water and 29,900 gallons for livestock watering to farmers in New Mexico, and a total of 418,000 gallons and 400 bales of hay to Utah farmers.

As of Saturday, the Begaye administration was still urging farmers not to turn in federal claims Form 95 to get compensated for their crop losses, noting language in the form that states the claimant will not pursue future relief.

In a Monday press release, the EPA denied this is true.

“EPA’s Federal Tort Claims Act regulation provides that a person may amend their claim form at any time prior to reaching a settlement with EPA, or before the person files a lawsuit under the FTCA,” reads the release. “Additionally, a person claiming an injury or damage has two years from the date of the event to file a claim with EPA.”

However, the release continues, it is not necessary to file a Form 95; as long as farmers can provide proof of their monetary losses, they can apply for compensation.

Although the EPA has six months to resolve a claim, “EPA will make every effort to respond to Gold King Mine release claims as soon as possible,” the release states.

Begaye has stated in previous meetings the tribe is contemplating either a class-action suit or a tribal suit against the EPA.

The chapter last week unanimously passed a resolution to request “urgent action” from the United Nations, saying the spill violates the UN Declaration on the Rights of Indigenous Peoples.

Among the demands is that the EPA permanently stabilize the mines, compensate the farmers and affected tribes, and “provide resources that will allow the local famers and appropriate entities to plan, design and construct appurtenances that will be alternative water source for river-based Navajo irrigation systems.”