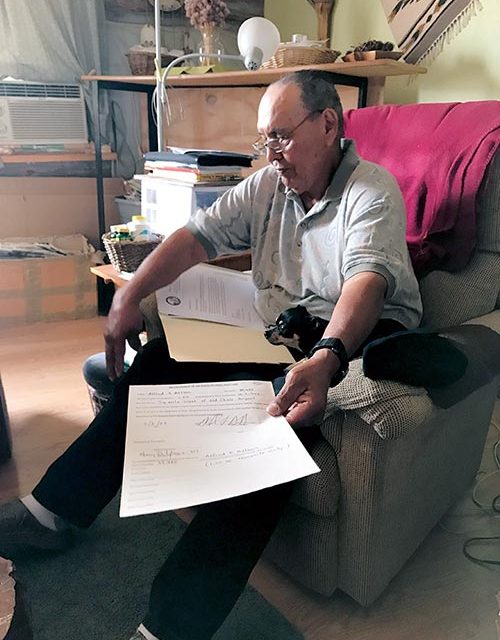 Navajo Times | Cindy Yurth Alfred Attson shows the lease relinquishment agreement he used to build his home in Chinle. Attson is worried that he may be evicted from the home he and his wife built with their own hands over a four-year period.

When the five compliance officers for the new home site regulations are hired, they will face a daunting task — enforcing laws that nearly everyone on the Navajo Nation is violating.

The regulations prohibit burials and additional homes on a home-site lease, and require special permits for home businesses, corrals, outbuildings and livestock. Homes must be set back at least 750 feet from roadways.

Here in the heart of the reservation, the regulations, which the Navajo Nation was required to draw up after the Department of the Interior granted the tribe the authority to issue leases without federal approval in 2013, have left both residents and chapter officials scratching their heads.

The rules were approved by the Resource and Development Committee 3-2-1 last October, but whether or not they’re final seems up for debate.

But Chinle Chapter Vice President David Yazzie said he was under the impression the department is still taking input at public meetings and the full Navajo Nation Council could make changes to the new regs.

Although the land department has held a series of meetings for chapter officials, “I don’t really understand the regulations,” Yazzie admitted. “I don’t think anyone understands them except Mike Halona.”

An informational meeting for the five chapters under Council Delegate Kee Allen Begay (Low Mountain/Tachee-Blue Gap/Nazlini/Tselani-Cottonwood/Many Farms) is scheduled for 9 a.m. on Aug. 16 at the Chinle Chapter House.

“I’m sure everyone will have a lot of questions,” Yazzie predicted.

Asked what he has on his own home-site lease, Yazzie demurred.

“I’m not telling you because I don’t want Mr. Halona coming to my house,” he said.

He’s not alone. Asked how many people in Chinle Chapter are out of compliance with the new regulations, the chapter’s grazing representative, Eugene Tso, replied, “Everyone who’s not living in the NHA.”

Tso said the chapter, like most areas on the rez, started to develop after the Long Walk along clanship lines.

“All this land around here, it’s all divided up by clan,” he said. “Everyone knows the main part of Chinle, that’s Kin Yaa’áanii land. Over there is Tse N’jikinii, then you’ve got Tsinajiniis, Ma’ii Deeshghiizniis and all the rest.”

The clans had a basic form of zoning, Tso said. Generally there was a matriarch who appointed land for a family cemetery, homes, grazing and farming. As girls were married, their husbands would move in and build a home for them among their clan.

“This new system, it doesn’t recognize that tradition,” he said. 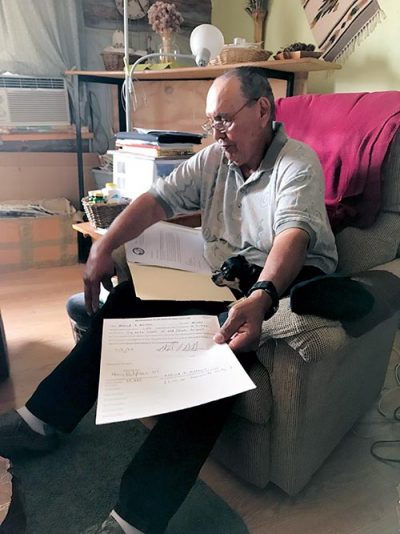 Navajo Times | Cindy Yurth
Alfred Attson shows the lease relinquishment agreement he used to build his home in Chinle. Attson is worried that he may be evicted from the home he and his wife built with their own hands over a four-year period.

But Halona said the old system isn’t working. All over the Nation, there are quarrels over land.

“We need regulation to assist in all of the disputes that are developing,” he said.

The enabling legislation for the rules also states that defining the uses of a home-site lease will help develop more housing and home ownership among Navajos.

But among the folks who are already here, it’s safe to say the new rules are wildly unpopular.

“I think it’s baloney,” said Ute Attson, who resides with her husband, Alfred, in a home the couple built with their own hands in Beautiful Valley.

The Attsons have some outbuildings, an enviable garden and a goat named Windy. What they don’t have is a home-site lease.

After living in Phoenix for years, where he met Ute, a bilagaana from Germany, Alfred heard Our Lady of Fatima Catholic Parish was giving some of the land it was allocated back to chapter members.

Alfred was excited because the land traditionally belonged to his father’s Ma’ii Deeshghiizhnii clan.

“My uncle is the one who told me about it,” he said.

Alfred produced the paper that allowed him to start building a home: a lease relinquishment from the Catholic Church.

“I was able to use this to get water and electricity,” he said. “I was going to go to the land office, but I never got around to it, and nobody has ever said anything to me.”

Ute had some strong words for the land department.

“Why are they going against their own people?” she asked. “It’s bad enough they had outsiders trying to take their land without worrying about their own government.”
She looked around her modest but pleasant home.

“It took us four years to build this house. We paid for everything out of our own pocket with some help from the veterans’ scattered housing,” she said. “We moved here so I could have a garden and animals. If I wanted to live in a beehive, I would have stayed in the city.”

This sentiment was mirrored by a retired couple living not far away.

The wife, who asked that her name not be used, said she and her husband had always wanted to come back to her ancestral land when they retired. She pointed to a picture of a traditionally dressed woman on her wall.

“That’s my late grandmother,” she said. “She was like our founder. I remember our relatives coming to her any time they had something to settle or needed some advice.”