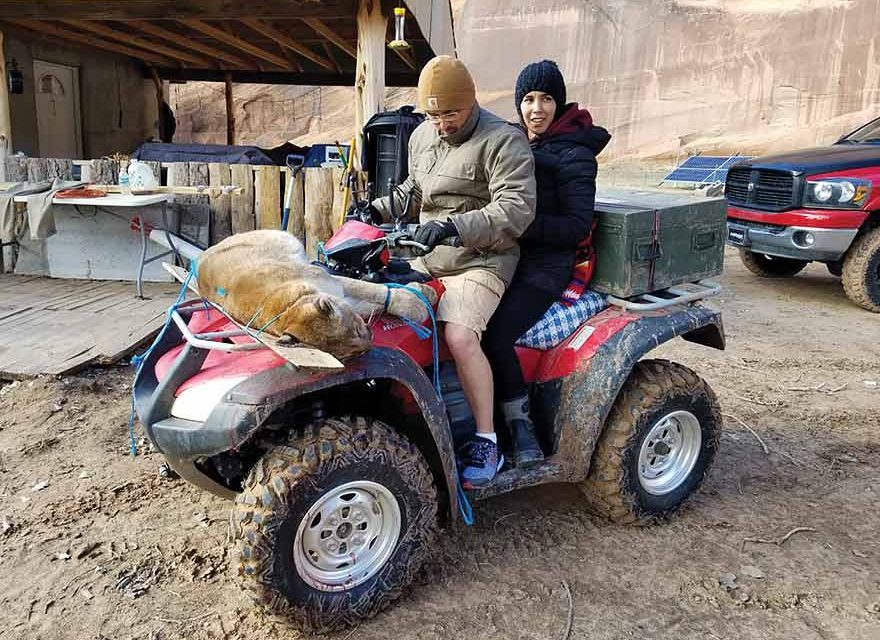 Courtesy photo | Genny Yazzie
Shane Beylund and his wife, Noaul, prepare to drive one of the dead lions out of the canyon last Monday.

When Genny Yazzie thought of mountain lions, she used to think of the ferocious but cute Chinle Wildcat logo. Now she has a far different picture after seeing not one, not two – but three big cats at way too close a range.

The unwelcome adventure started early last Monday morning, when Yazzie, one of a handful of people who live in Canyon de Chelly full time, sent her son, Shane, down to the De Chelly Wash to assess the rising water level after recent rains and snows.

“While Shane was walking back, I went out to the sheep corral,” she recalled in an interview Tuesday. “I saw all these little humps, and it gradually dawned on me they were dead sheep!” At first, Yazzie blamed the new sheepdog. “I said, ‘If that dog did this, we’re going to have to put her down!’” she recalled.

“Shane said, ‘Mom, I don’t think it was her.’” Yazzie counted seven dead sheep, and could see part of another one sticking out of the small shed in the corral. Yazzie peeked into the shed and came face to face with a cougar. “We just looked at each other,” she said. “It wasn’t five feet from me.”