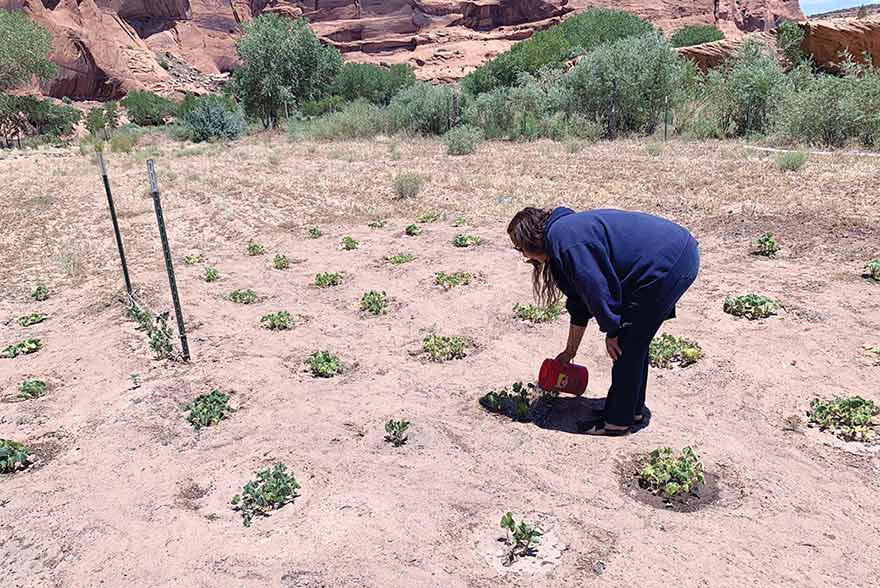 For a thousand years, people farmed the bottom of Canyon de Chelly, relying on seasonal floods to irrigate their crops. Water was a hit-or-miss affair, but the Anasazi, and Navajos and Hopis after them, managed to make a living.

This ancient method of flood irrigation was used until 1964, when the U.S. Bureau of Reclamation built the dam that formed Tsaile Lake above the canyon rim.

According to BOR documents, the 52-foot-high, 1,950-foot-wide dam was built to stabilize the flow in the De Chelly Wash, provide reliable irrigation to downstream farmers, and create a lake where locals could fish and recreate. But as more and more people left the canyon for jobs in Chinle and elsewhere, the irrigation goal became secondary.

This summer, three women who farm the canyon bottom say, they haven’t been able to access water from the 5,500-acre-foot reservoir at all.

“For several years, no one’s been planting because of the drought,” said Genny Yazzie, who lives in the canyon full time and raises corn, squash and fruit trees near her home below Junction Ruin. “This year, with all the rain we had this spring, people started planting again.”

Water rushed through the wash, twice flooding homes at the mouth of the canyon, from February until early June. Then, quite suddenly, the wash slowed to a trickle and then dried up. To get to her farm near First Ruin, Deborah Lem has to drive through axle-deep sand the consistency of “powdered sugar.”