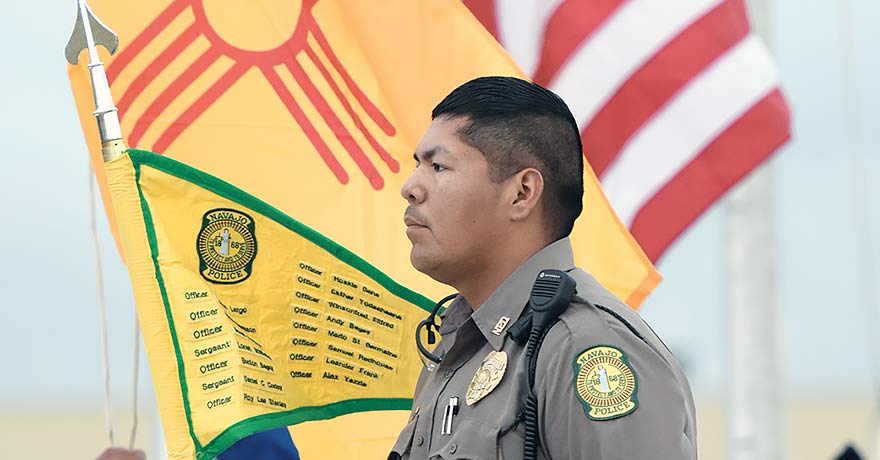 In 1973, the late Robert Henderson was my captain with the Shiprock Navajo Police. Robert later became the Navajo Nation chief of police. Even back then the Navajo Police was treated poorly by our tribal leadership. The pay was very low. I started at $2.92 per hour. In comparison to the power plants and coal mining, their laborers were getting higher pay.

As a policeman, I was told to donate all my overtime to the tribe and only claim eight hours overtime every two weeks. After a month and a half of patrolman work, I was assigned to the Criminal Investigation Unit as a trainee. I have worked with our own personnel, BIA investigators and FBI as my trainers. I have investigated homicides, rapes, strong-arm robberies, vehicle fatalities, and any criminal-related work. Many days and nights I spent working lots of hours. It was not an 8-to-5 job.

When a Navajo died, it was our job to take care of them with respect. So a recent event by our tribal Council members disrespecting our chief of Navajo Nation Police shows the attitudes of our leadership. Council members get paid for every meeting they attend. It is time for this money to be used for tribal employees and for their retirement.

Years after I left the Navajo Nation Police Department, I visited the NNPD chief of police, Robert Henderson, after he retired. He was only given a retirement of $500 a month. Now, in comparison to other local community police chiefs, that was low. Captains and lieutenants were in no better shape, $200 to $300 a month.

A patrolman that works 40 years gets $200 for monthly retirement pay. Every Navajo tribal employee should get a decent pay raise and a retirement pay comparable to communities near our tribal land. If our current tribal president and vice president want to see a better nation, then concentrate on the way our tribal employees should be treated with pay and retirement. Our tribal Council needs to do away with getting pay for every meeting.

They have a salary, per diems and mileage already. They raised their hands to serve the Navajo people. If no, please vote for new changes in the next election. Do not favor your relatives, vote for a change.

Leadership is taking us in wrong direction

Navajo Nation leadership is leading us in the wrong direction. The Council is considering the passage of two bills that would make it more difficult for workers to keep jobs and send the wrong message to businesses. Legislation 0073-19 and 0098-19 are job-killers. We voted our leadership to create more jobs, not end them. They are in office to generate revenue to improve education, pay for senior homes, build recreation centers and hire more police officers to make us feel safe and healthy. If it passes, then we will have become the laughing stock of Indian governments.

We will become the example of what-not-to-do in Indian government. We’re already losing $900 million and at least 800 good paying jobs with the closure of the Kayenta Mine and Navajo Generating Station. We can add the loss of valuable political capital with the state of Arizona. We had the opportunity to keep those jobs and increase our political capital with the state of Arizona, but our leaders chose to take three steps back and become more dependent on the federal government. They made that choice and now we have to deal with the effects.

Not Council or the president, but hard working Navajo people and their families. The president doesn’t get to lose his job nor members of Council based on this decision, but because of their inaction, 800 people will lose theirs.

The president has no plan to bring new business to replace the lost revenue and jobs. His plan is to hope that unemployed miners will become the new entrepreneurs and buy Navajo. But he didn’t set aside any money to help new entrepreneurs, he just proposed a plan that keeps tribal employees in the office.

It’s a 173-page proposal that hopes to improve government. It falls short of expectations. He’s already seven months behind and it’ll be another three months before the plan takes another step because of the budget process.

Crime, bootlegging, meth dealing and human trafficking are on the rise because we don’t have enough public safety personnel. Our police academy is in shambles and the oversight committee wants to micromanage.

This is gross negligence of NNDA’s mission statement that reads “NNDA provides administrative guidance and support services to District Grazing Committees with emphasis on regulation oversight in accordance with federal regulation and Navajo Nation Code.” This is program mismanagement as well.

They failed to advise DGC that the decision to cancel permit is not justified because there’s no written violation notice nor is it recorded in the permittee’s livestock tally record. DGC have no proof.

The only proof is “injustice” to the permittee. Worse case scenario: RDC Office of Legislative Service approved and authorized a request by the permittee to be on the RDC agenda on May 29, 2019, to present his complaint in reference to 25 CFR 167.13 requirement. At the last minute before the permittee’s presentation, NNDA influenced NNDOJ to remove the permittee off the agenda due to litigation matters. What litigation?

No litigation record was ever presented to the permittee in 10 years when his dispute with NNDA and BIA originated. In legal terms, complaining party must have an attorney before a dispute is classified as a litigation matter. On July 1, 2019, the permittee was invited to attend the DGC monthly meeting to witness DGC resolution to cancel his grazing permit.

The resolution has incompetency, inconsistencies and errors. When the permittee asked about Navajo Nation Code Title 3 Chapter 5-708 in the resolution, Ray Castillo cites non-existing Navajo Nation Code that he says is stated in the 1966 code amendment. Internet research reveals 708 is a draft proposal for the year 2000 Navajo Nation Grazing Act. The proposal was not approved by the Navajo Nation Council due to public hearing objections. Internet shows Title 3 Amendments (CD-76-14) has missing 708. NNDA and DGC making their own laws is corruption.

Ray Castillo (NNDA), Jerome Willie and Calvert Curley (BIA) attended the July 1 DGC meeting. They failed to advise DGC that DOJ put restriction on any further action, including resolutions because the case is in litigation.

This is outright corruption by two government entities. DGC resolution also referenced 25 CFR 167.8 that reads no one is to hold more than one grazing permit when Jerome Willie created the mess in 1991 by approving a second permit. No one questioned his mistake nor did he admit making a mistake.

Furthermore, no one questions Mr. Willie’s and Mr. Curley’s negligence when in 2008 they approved District 17 trespass grazing permit as a yearlong permit in District 18. These are gross corruption by NNDA, DGC and BIA. They must prove me wrong.