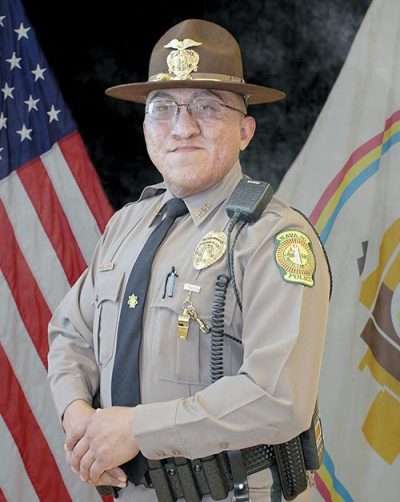 Submitted
According to Navajo Nation Police Chief Phillip Francisco, Officer Nelson Martin, attached with the Kayenta Police District, was killed in a vehicle collision. He was not on duty at the time and was a passenger. The driver of the vehicle Martin was in was taken to an area hospital.

The Kayenta Police District is mourning the death of a police officer who was killed in a vehicle accident Monday night.

Diné Police Officer Nelson L. Martin was 35 years old, according to public records obtained by the Navajo Times. He was originally from Tsébii’ndzisgaii, Utah.

The accident happened on U.S. Highway 89 at milepost 445.8 in Gray Mountain, Arizona, according to Navajo Police Chief Phillip Francisco.

The Arizona Department of Public Safety responded to the incident.

The vehicle Martin was in swerved right before it crashed into a semi-truck, said Francisco in an interview. Martin was a passenger and was killed instantly.

State Police Trooper Kameron Lee said a gray Ford pickup was traveling southbound when — for an unknown reason — it crossed over into the northbound lane and struck the semi traveling northbound.

“The collision sent the driver of the pickup truck to the hospital with serious injuries,” Lee told the Times on Wednesday morning.

Rosales Yazzie, the driver of the vehicle, was badly injured. An ambulance crew resuscitated him twice, then transported him to a hospital where he is now recovering, said Francisco.

Yazzie, who was intoxicated, could be facing vehicular manslaughter charges. Yazzie is not a police officer.
“He (Martin) was not working at the time,” Francisco said. “He was coming back from Flagstaff on personal days off.”

Lee said the investigation is ongoing, and whether Martin was intoxicated or not has not been determined. The semi-truck driver was reported to be OK.

Martin attended Monument Valley Seventh-Day Adventist Mission School in his early years, according to members of the Tsébii’ndzisgaii community, where he grew up.

Before Martin was hired by the Kayenta Police District in 2002, he assisted leaders at the Adventist Church, according to a man who served alongside him in the church. He was promoted to a senior police officer in 2007.

“He was a good officer,” Francisco said. “He was always happy to do his job, always friendly and well-liked.”

This is the third Navajo police officer death this year, according to the Navajo PD.

“It’s unfortunate — tragic,” said Francisco, who completes one year today as the tribe’s chief of police. “This is unfortunately sad that we’re losing officers. Even if they’re off-duty, it’s still one of ours.”

Police officers across the Navajo Nation are “quiet and reserved, and shocked,” he added.

Kayenta PD posted on its Facebook page that local police lost a brother.

“Words alone cannot express how each and everyone of us in Kayenta District are reacting,” the post reads.

“We have (lost) an extraordinary individual who gave many years of service to the people of Kayenta.”

The post continues, “You are very unique and irreplaceable, we are all surely going to miss you greatly.”

“We know that not only you but the community and the Nation will miss him greatly,” Begaye said.

The Kayenta PD is accepting monetary donations. Those who would like to donate may contact police officers Shishawnia Stevens and Tyrone Tom in person.

Police officers within Kayenta PD were off duty Tuesday night due to bereavement. Officers from Shiprock PD took over their duties.