Navajo gaming tells all 1,180 employees to prepare for layoffs 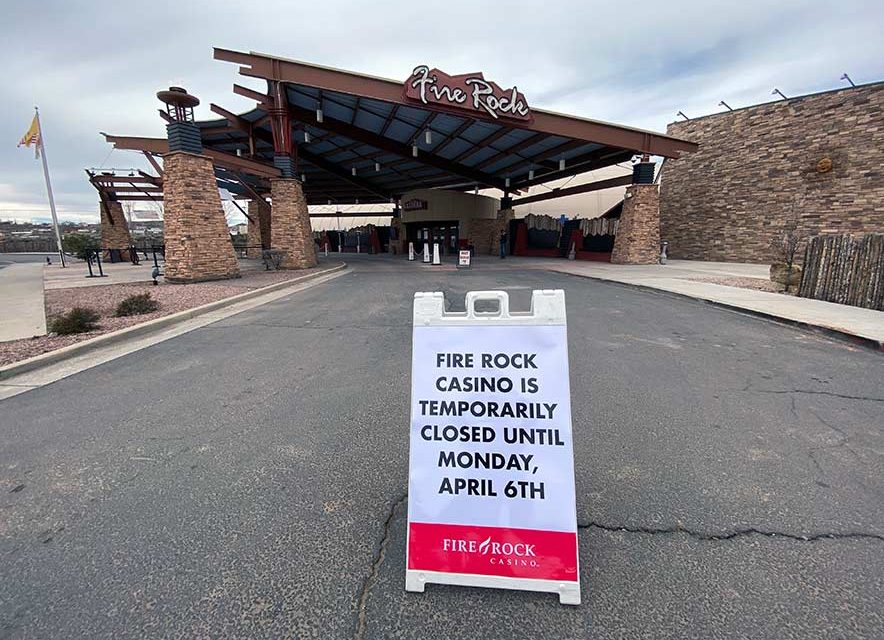 Navajo Times | Donovan Quintero
Fire Rock Casino patrons are met with this sign after the Navajo Nation’s four casinos were shut down on March 17 due to concerns over the coronavirus.

The gamble to reopen on July 27 is not going to pay off for the Navajo Nation Gaming Enterprise.

On Thursday, employees said they received word to prepare for layoffs from all four tribal casinos. The employees,who said were upset over the news, said they wanted to remain anonymous for fear of retaliation.

“The layoff procedure that we have, it’s very extensive,” Parrish said during a telephone interview. “It involves every level of the organization. So, it’s not that management isn’t affected, but everybody.”

The tribe’s four casinos closed on March 17, due to concerns about the COVID-19 pandemic. The Navajo Nation Gaming Board of Directors sent a memo temporarily shutting all four casinos — Fire Rock, Twin Arrows, Northern Edge and Flowing Water — for a period of three weeks.

Prior to the shutdown, casino patrons were having their temperatures checked at the front entrance.

Parrish said that all 1,180 of the enterprise’s employees could be getting laid off in two stages, assuming the gaming enterprise doesn’t get  financial assistance from the Coronavirus Aid, Relief, and Economic Stimulus Act, or CARES Act.

During the closure, Parrish said the casinos paid employees with their cash reserves. After nearly 19 weeks, he said their reserves are nearly exhausted.

Though he didn’t specify how many people were going to initially be laid off, Parrish said the first group would be a large group. The second group would be smaller. About 100 casino employees consisting of maintenance and security crews would stay on and continue maintaining the casinos, he added.

On Wednesday, the Office of the President and Vice President issued a statement that due to COVID-19 cases increasing in New Mexico, Arizona and surrounding border towns, tribal office closures were extended to Aug 16. re-opening was previously set for this Monday.

Two casino employees said they would be forced to use their  personal time off hours. One said they had 90 hours.

“I’m hoping this scare will help the Nation to approve funding,” said the employee, who wished to remain anonymous.

Parrish said if they do not receive any CARES Act funding, the layoffs would begin.

“So, our thought process is once we can reopen, we’ll be able to get back on our feet. But the CARES funding is going to help stabilize as well as we rebuild the business,” Parrish said, adding all employees would continue receiving healthcare benefits, even if laid off. “And so that’s what we’re facing. The key would be doing temporary layoffs, for hopefully a very, very short period, if at all.”

“The debate continues under (Legislation No.) 0144-20. I know there was some language listed in there for Navajo gaming. We will be discussing on Tuesday,” Freeland said.

Parrish said he didn’t know when the legislative process would be completed.

“We haven’t gotten confirmation that we’ll be receiving funding, but I think as soon as we do, we would make the recommendation to our board that we put everybody back on administrative leave with pay while we wait to reopen,” he said.