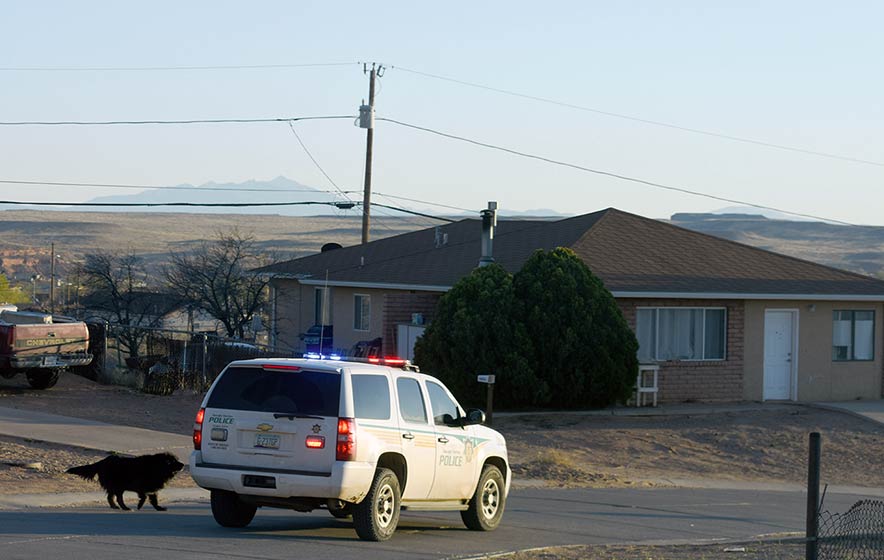 Navajo Times | File
A dog inspects a Navajo Nation Police vehicle as an officer drives through a neighborhood offering instructions to shelter in place over his public address system.

President Jonathan Nez said rather than the government policing Navajo citizens, it’s up to the citizens themselves and with that he announced the lifting of the 57-hour weekend curfews.

During his daily townhall on Facebook, Nez said, “It will no longer be in place unless there is an increase of COVID-19 cases.”

For two months the Navajo Nation has under the weekend curfew starting Fridays at 8 p.m. and ending at 5 a.m. on Mondays in order to slow the spread of COVID-19. Last week, health officials reported that the peak in cases the Navajo Nation was expecting in May actually happened in April. This meant demands on health facilities were lessened but numbers of cases are still high.

As of Tuesday, 5,533 positive cases were reported with 1,960 recoveries and 252 deaths. The daily curfews, from 8 p.m. to 5 a.m., will still be in place and stores will continue to be closed at this time as well. Nez asked that the gas pumps at these stores be shut off during those curfew times.

Later on today Nez said there will be other public health orders regarding church gatherings, traditional ceremonies and others. These will be permitted but with guidelines in place. Nez also signed an executive order to prolong the Navajo government closure until July 5. Because of this closure, the Window Rock July 4th events are canceled.