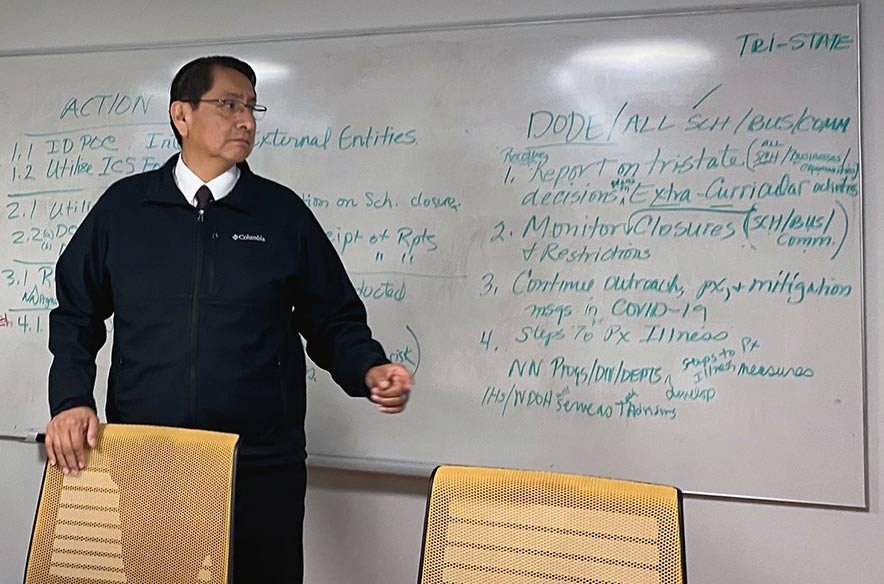 President Jonathan Nez line-item vetoed the “piecemeal” Navajo Nation Council’s CARE Fund resolution. It was introduced a day after the Navajo Nation had received the $600.5 million.

And from the beginning, Nez said it wasn’t ideal legislation.

“We are analyzing that legislation and we see there needs to be improvement to that legislation,” said Nez during a May 8th town hall. “It’s unworkable. The way it is, because you are putting federal guidelines into a Navajo bill and if you do that you tie your hands to what those criteria are.”

A few days after this town hall, Nez, Speaker Seth Damon and Chief Justice JoAnn Jayne met to discuss the CARES Act after which Damon sent out a press release pointing out nine inaccurate statements made by the Nez about Council’s bill.

The next town hall had Jayne and Nez speaking on the CARES Act without Damon, who has not made an appearance on the executive branch’s town hall although some Council delegates have.

During an Wide Ruins, Arizona, distribution of donations, Nez said he would veto the CARES Act. At that time he was waiting for the bill (0116-20) drafted by the executive branch team to be dropped, or introduced. Since then it’s been sponsored by Law and Order Committee member Edmund Yazzie and co-sponsored by seven other delegates and is ready for committee action.

During the Navajo Nation Council session that took place in May to vote on the Council’s CARES Act, the divisiveness was on full display. Health, Education and Human Services Committee member Pernell Halona (co-sponsor of 0116-20) said they are going in two different directions because it comes down to Council “not liking OPVP,” and this is a major hindrance.

“Point of order, speaker,” objected Law and Order Chair Eugenia Charles-Newton. “That’s not true. By clan, president is my dad and I have respect for him.”

Damon and Delegate Nathaniel Brown said they have reached out to Nez, Lizer and their staff but have not received a response.

In Damon’s press release about the line-item veto, he said Nez did execute a line-item veto, rather than a regular veto, but it was an “illegitimate expansion of law,” which is used on the general budget.

Damon said he believes Nez doesn’t have authority to line-item veto this resolution.

“The president’s line-item veto has unnecessarily delayed the release of coronavirus relief funds to program, chapters, nonprofits and other entities,” stated Damon. “The Navajo Nation Council will continue to work quickly to get these resources to the grassroots efforts, front-line workers, health care facilities and to our families living in our most remote areas with the most immediate needs.”

In the past year, many Council-approved resolutions have gone to Nez only to be vetoed. In response, Council overrode those vetoes, but they can’t do that now with Nez’s line-item veto, which are not subject to an override.

Nez said his administration is working diligently to develop a comprehensive expenditure plan for the $600 million.

But before these expenditure plans, whether developed by legislative or executive, can be developed, a Navajo Nation CARES Act has to be approved, and since legislative’s plan was line-item vetoed, that leaves Nez’s plan.

The $600 million should be directed to help the Navajo people, Nez said, adding that before he was elected by nearly two-thirds of the Navajo voters, he visited over 70 chapters and spent long hours listening to the needs of the people.

“We are well informed of the priorities in every region,” he said. “The plan further outlines the immediate needs to keep our Navajo families, communities, and economy safe and secured.”

If Nez’s CARES Fund bill is approved, an immediate expenditure of $50.5 million will be made for personal protective equipment; Care packages to assist Navajo families that have been impacted by COVID-19; hazard pay or special duty pay for essential employees; cleaning and sanitation of all Navajo government facilities and public areas; reconfiguration of all Navajo Nation offices, which complies with the Centers for Disease Control and Prevention guidelines for the safe return of employees; and telework capable computer systems for Navajo Nation employees.