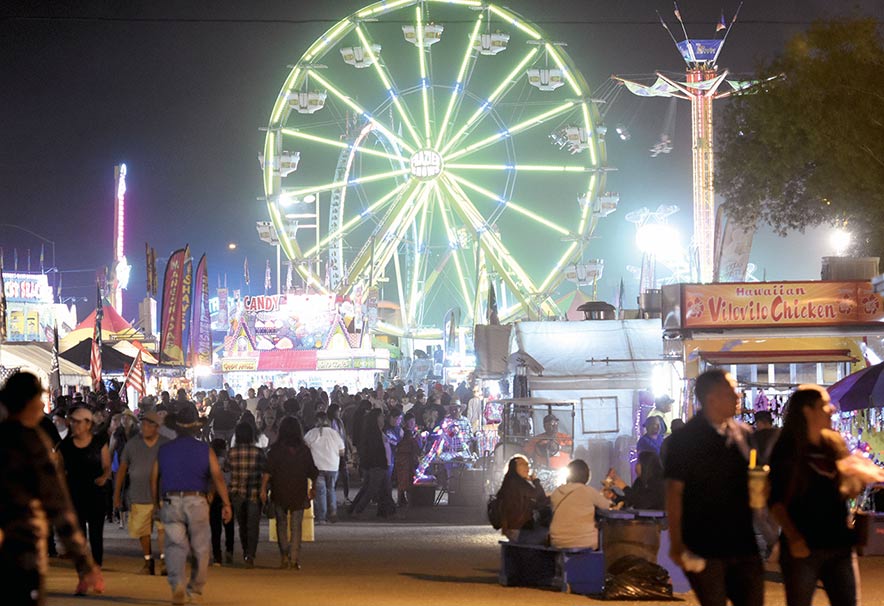 Navajo Times | Donovan Quintero
Fairgoers makes their way to and from the carnival rides on Friday during the 73rd annual Navajo Nation Fair in 2019 in Window Rock.

Fireworks might have gone off without a hitch for the 4th of July, but it looks like fair season could be a bust again this year, primarily due to COVID-19 uncertainties and lack of enough time to plan, raise funds and secure sponsorships.

“Due to the ongoing COVID-19 pandemic, there is no feasible way for the Western Navajo Fair to put proper precautions in place while maintaining the fair ambiance you know and love,” said a June 16 Facebook announcement on the Western Fair Facebook page.

Fair Manager and To’Nanees’Dizi community events coordinator Mike Sixkiller, who successfully turned the Western Fair around into one of the Nation’s most popular attractions, said that a large part of the decision relates to the fact that the Western region has not yet reached COVID-19 herd immunity.

“It does come with a heavy heart, we are announcing the cancellation of the Western Navajo Fair,” he said. “This decision does not come lightly.”

In order to achieve herd immunity, 70% to 80% of the population needs to be vaccinated, he said, which keeps the virus from spreading and coming back.

“Currently we’re at about 50, 60 percent who are vaccinated,” Sixkiller said in a daily briefing. “The rate of people getting vaccinated has slowed down immensely. Our medical experts are telling us they don’t predict us being able to hit herd immunity by fair time.”

The Western fair is the grand finale of fair season, which occurs on the heels of the Northern Navajo Nation Fair in the second week of October.

“October holds a special place in our hearts as memories of family fun, laughter, the smell of kettle corn and turkey legs, as well as a bit of two-stepping, is shared by all of us,” said Sixkiller.

With the amount of people who would likely attend the Western Navajo Fair if it were held, Sixkiller said they would not be able to enforce COVID-19 prevention protocols, including masking and social distancing.

“We just don’t have the means to put the safety measures in place,” he said.

Plus, the ongoing Navajo Nation public health orders still do not permit large gatherings and community events, except for flea market operations, and at this point there is simply not enough time to plan for the fair events and garner commitments from sponsors, which usually start a year in advance.

“An event of this magnitude requires a great deal of pre-planning and preparation…” said Sixkiller. 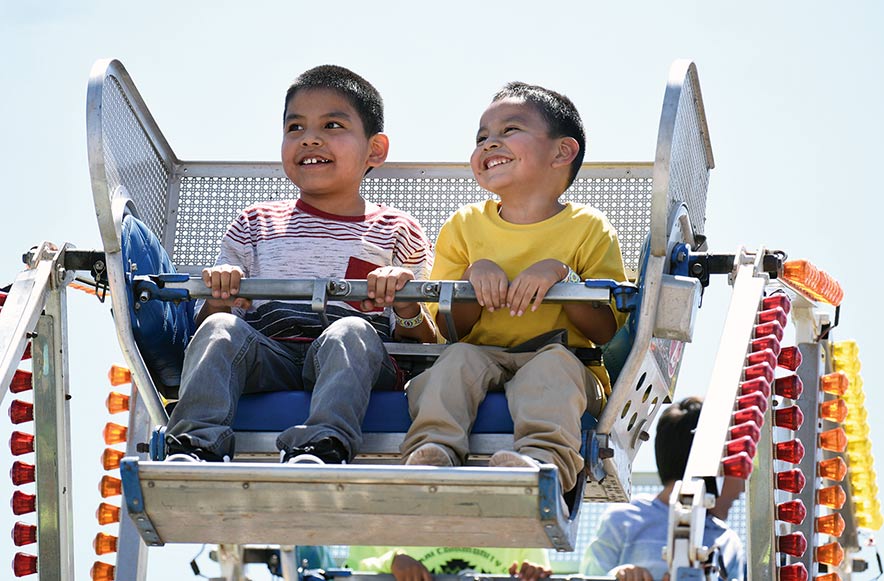 Navajo Times | Ravonelle Yazzie
Brothers Fabian, 6, and Harlyn Hood, 4, enjoy the view from the Ferris Wheel on Thursday at the 2019 Navajo Nation Fair.

A call to Shiprock Chapter revealed that there is no official word yet on the status of the 2021 Northern Navajo Nation Fair, but that a decision will be made within the next month or so, said the person answering the phone, who wished to remain anonymous.

“Call back in about a month,” she said.

The Eastern Navajo Fair Board proactively took action in February to cancel their annual July fair in Crownpoint due to the ongoing public health emergency, saying it was the best decision for the health of community members, exhibitors, professional rodeo athletes, community organizations and fairgoers.

“Safety is our highest concern for all participants, which led to this critical decision,” stated the board. “Following increased and overwhelming concerns about the COVID-19 pandemic, we felt this was the best way to proceed during such an unprecedented global situation.”

The board said instead they are going to take the opportunity to focus on starting to plan for the 2022 Eastern Navajo Fair.

They are already seeking to fill volunteer fair coordinator positions for concession/vending, veterans’ events, song and dance, and security and are requesting letters of interest be sent to rbecenti.enf2020@gmail.com.

“We would like to extend our deepest appreciation to all our frontline heroes as well as send our heartfelt condolences for all the beloved community members we have lost,” the board concluded.

Last week, Department of Agriculture Director Leo Watchman told the Resources and Development Committee that with the limited timeline left for fundraising and coordination coupled with ongoing public health orders and restrictions on visitors to the Nation, the likelihood of having a Navajo Nation Fair, which occurs in the first week September, was “probably not there.” 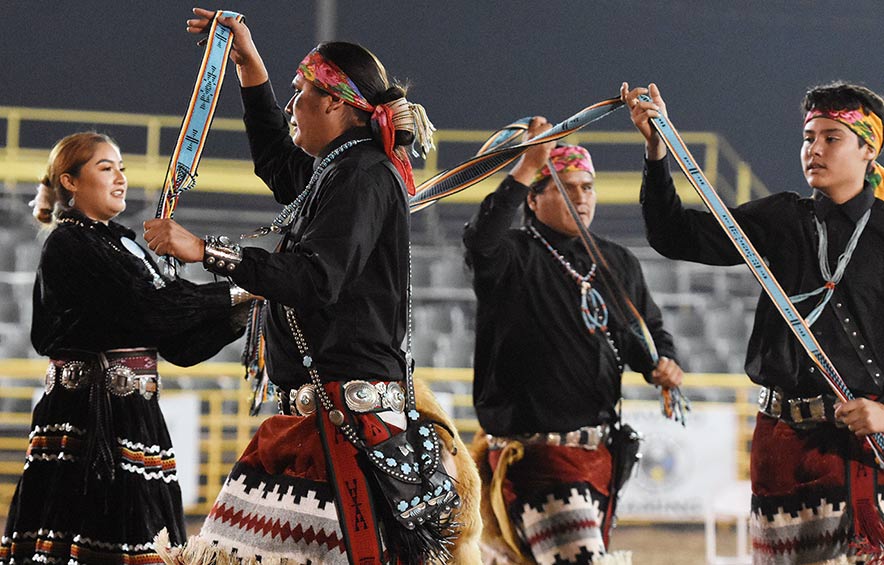 “We know how beloved this event is to families across Dinetah and we will continue to provide the necessary improvements and upkeep to our facilities…,” said a statement from the Division of Natural Resources, DOA and the Fair Office.

“However, to keep our children, parents and grandparents safe and to enjoy this event into the future, we must focus our attention on helping prevent the spread of COVID-19,” the statement said.

Under the direction of DNR Director Rudy Shebala, DOA assumed management of the Navajo Nation Fair in 2018 after numerous audits pointed to multiple financial and safety compliance issues under the Parks and Recreation Department that formerly oversaw the fair operations.

“We do have a plan on some of these deficiencies, based on reports done by various programs that do inspections on fairgrounds,” said Watchman.

But Watchman also said that renovations and deficiency corrections that were initiated in 2020 were not completed and several of the facilities, including Gorman Hall and Nakai Hall, are still being used by various entities for emergency services and to store COVID-19 emergency supplies.

“We were unable to complete those (renovations) due to the pandemic,” he said.

Upgrades in progress or in the pipeline include the construction of a fairground border fence, enhancements to lighting, expanded parking lot access, resurfacing of the midway, installation of building ventilation, water, drainage and sewer system overhauls, and improvements to the 4H area and rodeo arena, including new bleachers and skybox area upgrades.

However, some of these projects and a couple of new buildings in the design phase have also been held up because the main architect for the Navajo Nation retired, he said.

“That put a hold on moving forward with these contracts that require architectural certification and approval,” said Watchman.

“A lot of the contracts are just now going through and it’s very hard,” said Navajo Nation Fair Manager Leonard Francisco, who lamented that the Division of Economic Development was taken out of the loop. “All of our contracts that we do are directly going through the Capital Projects Management Department.”

Under the Division of Community Development, CPMD is already woefully backed up on projects, short-staffed and underfunded.

Some of the contracts, such as for the border fencing, are now just going through the cumbersome ’164 process, said Francisco.

“Eventually you will see some improvements on the fairgrounds,” said Francisco. “We can’t really use the pandemic excuse anymore. We just need to work with each other and communicate and get these projects moving. That’s what I would like to see.”

Delegate Wilson Stewart expressed frustration that many upgrades, including for water, sewer and the replacement of the bleachers, were requested by RDC a year ago.

“I believe this year was a good time to get things going and upgrade some of these facilities on the fairgrounds,” Delegate Kee Allen Begay told Watchman.

Begay said the Division of Economic Development should be there to assist DOA with implementation of fairgrounds projects and plans should include use of the fair facilities for other year-round events.

Watchman said his staff hopes to deliver improvements in the coming year that haven’t been accomplished in many years prior.

“We do agree with that,” said Watchman. “I know it’s been year in and year out – my experience with the programs is that it’s been brought up and planned, but it’s never done.”

Watchman said he, Shebala and Francisco will re-focus on identifying what is achievable within the timeline approaching the 2022 fair.

Francisco appealed to RDC to help DOA and the Fair Office get economic development back on board to assist with project development.

“I really need your help as a committee to tell Community Development to let us work with Economic Development in getting that rodeo arena up to par,” said Francisco.

In turn, RDC Chairman Rickie Nez suggested bringing DED and DCD to the table for a meeting.

“We can all work together on this,” said Nez.