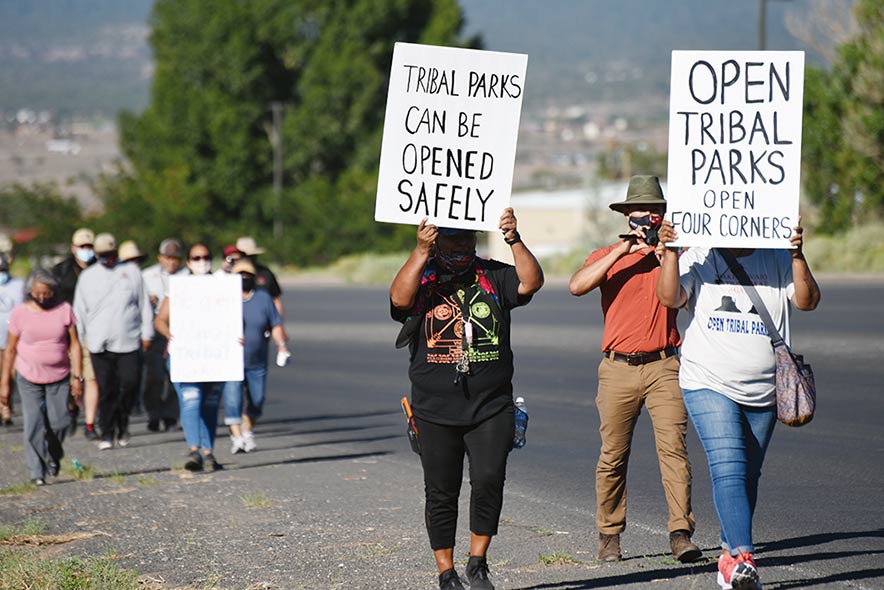 Navajo Times | Krista Allen
Tour operators, along with their employees, from Antelope Canyon in Dá’deestł’in Hótsaa to Four Corners march along Window Rock Boulevard to the Veterans Memorial Park on Tuesday morning in Tsébigháhoodzání.

Laid-off workers called many times to maintain contact with her over the year. Many would ask, “When are we going back to work?”

Carol Bigthumb, owner and operator of Adventurous Antelope Canyon Tours, said she didn’t know how to answer that question.

But she’d tell them, “Pretty soon, pretty soon. Just hang in there.”

When Tsébii’ Hazdeestas closed on March 14, 2020, many of her Diné laid-off workers moved to Phoenix to find a job. But some moved back to the Dá’deestł’in Hótsaa area because housing costs in the Valley are high and they couldn’t afford it.

Carolene Ekis, owner and operator of Roger Ekis’ Antelope Canyon Tours, said her laid-off workers come to her and say they need to work.

“That’s why I made the drive out here (to Window Rock on Monday evening),” Carolene Ekis said. “When will the parks reopen? That’s my main concern.”

President Jonathan Nez announced on Tuesday morning that the Navajo Nation parks will reopen – with coronavirus safety protocols developed by the Indian Health Service – at 50% capacity on Monday, July 12.

Nez signed the Navajo Nation Council resolution (CJN-36-21) in front of tour operators and their families who traveled to the capital not only for the signing event but to advocate for reopening Diné businesses and schools.

“Sixteen months almost, it’s been long overdue,” Ekis said. “I started hounding (Nez) two months ago. We kind of were forgotten – decisions made for us, that we weren’t told about when the reopening started.”

Ekis said she had 39 workers and every one of them was laid off.

She also owns a bead store in Page and the Inscription House Trading Post in Ts’ahbiikin, Arizona. Both businesses kept her afloat during the pandemic last year.

“The store in Ts’ahbiikin, it hurt because of all the closures and shutdowns,” Ekis explained. “People, they went to border towns (to do their shopping).”

Linda Jackson, owner and operator of Navajo Guided Tours Services in Oljato-Tsébii’ndzisgaii, said she had seven workers, all of whom were also laid off.

The coronavirus pandemic brought various hardships and ravaged all parts of the Diné economy, and Diné workers and small-business owners were among the hardest hit.

But some have managed to keep their jobs while others are still struggling, said Jackson.

“We’re still in a hole,” she said. “I didn’t get any money from the hardship (assistance program) even though I applied for it.”

Jackson said while her business was closed over the last 15 months, she and her daughters often helped the seven employees and the 80 or so individuals – who live on Monument Valley’s desert floor – cope with all the uncertainty, such as getting them food and providing food for their animals.

“Inside the park, we didn’t really get any help from the food banks,” Jackson said in an interview. “My daughter went out to Phoenix and started campaigning to get food for the residents down in the park. We brought food down and passed them out.”

Jackson said even though she struggled to stay afloat, she and her daughters also supported the young college-bound residents by fundraising for their room and board at school.

“So many of us (residents living within in the Monument Valley Tribal Park) got behind on our vehicle payments and some are ready to get repossessed,” Jackson said.

She said now that the parks have reopened, the local artisans will be able to sell their arts and crafts again.

“We all got hit hard and we know that,” Nez said. “We got hit hard with this pandemic. Some of us lost relatives – over 1,300 of our Navajo citizens lost their lives to COVID-19.”

Nez said members of the Nation truly had to soldier through tough coronavirus restrictions to try to slow waves of the coronavirus. These included curfews, limits on gatherings and limited travel off the Nation.

“But you know what? The world was watching us,” Nez said. “This country was watching us. Dr. (Anthony) Fauci even said, the Navajo Nation is a model to bring COVID numbers down in a region. That’s something to be proud of.”

Fauci told the Navajo Times in September that if the country followed the Nation in addressing the pandemic, the same result could be seen throughout the U.S.

“Because of these tough (restrictions), we locked down the Nation,” Nez added. “We have to wear masks and we’re still wearing masks today. We’re coming through this pandemic and we’re strong and resilient because of our ancestors.”

With many businesses closed in the Navajo Nation and chapters and convenient stores emptied out, Antelope Canyon – Tsébii’ Hazdeestas or Tsé’ésdooltas – rewilded and wild animals thrived in the deserted canyons for more than a year, said Michelle Monroe, the daughter of Kenneth and Emily Young of Ken’s Tours.

Monroe is chief operating officer of the Youngs’ Western Circle Group of businesses in Dá’deestł’in Hótsaa and in Łichíi’ii.

Emily Young said people from all over the world visit the canyons every year.

“It’s a nice place to be,” Young said in a previous interview with the Navajo Times at her home in Page.

But it’s a sacred area where ceremonies were done before the Tooh Dine’é visitors even stepped foot in the canyons.

“We had ceremonies done so people can go in and out of the canyon and let the gods (Diyin Dine’é) know that we’d be coming through every day,” Young explained.

In the Diné culture, Tsébii’ Hazdeestas is the home of Diné deities, including Haashch’éshzhiní (Black God), Zaha’doolzhaaí (Fringed Mouth God), Tééhoołtsódii (Water Monster), among others.

That is why people must prepare themselves when they are at or in the canyon. In fact, people could injure themselves physically or spiritually if the visits aren’t kept holy.

“So, to go inside, you have to be in the right frame of mind … that you’re going to see this sacred place,” Young said.

This is why Young and her husband, Kenneth, closed their business for at least two weeks – and to give it a rest – during the wintertime every year. But this changed when the pandemic happened.

Pearl Begay, 96, said not a single a white man was around during that time, when she was a child living with her family in the Tsébii’ Hazdeestas area before the park was created.

“More than a year ago, we heard about this virus,” Begay said in Diné Bizaad. “Now our parks have reopened. My children, my people – I’m so thankful that the parks (and the Navajo Nation) have reopened.”

Begay said she sheltered in place all last year and recently left the house, where it “felt like prison.”

“Now, this virus will lift,” added Begay, who is Tsi’naajínii and born for Naasht’ézhí Tábąąhá.

The reopening resolution was approved by the Navajo Nation Council on June 25. It rescinds eight resolutions that were put in place during the peak of the pandemic last year.

“With the signing of this legislation, our Navajo and other businesses in the Navajo Nation boundaries can now pick themselves up,” Paul Begay said, “recover and get back on the road.

“With the signing of this legislation, we can get our young people, our high school students, college students, back in the workforce,” he said. “So, in couple of months, they can have some money in their pockets. They can buy the necessities that they need to continue their education.”