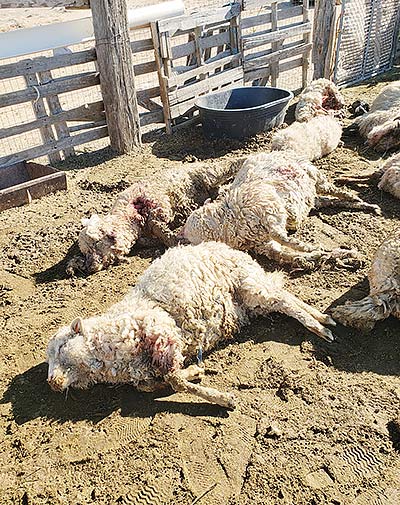 A Hard Rock, Arizona, couple came home to a horrific sight after a visit to Flagstaff last week — more than half their flock of sheep were lying in their corral dead and covered with blood.

Erma Nells said 15 of her 29 sheep were dead, apparently mauled by predators, and several others were severely injured. “I’m a weaver, so I rely on my churro sheep of different colors,” she said. “It was almost like coming home to find a family member dead.”

Suspecting a pack of stray dogs she had had a run-in with in the past, she called Navajo Nation Animal Control, only to be told all the officers were away at a meeting. She then rang up her grazing committee representative and the Navajo Rangers.

After the grazing official took a loss report, a Ranger showed up, Nells said. He decided to drive up some of the back roads to investigate. “After some time, as I was cleaning the corral, a pack of dogs came up the arroyo,” Nells recounted.

“They were headed toward the sheep corral. I was frightened but I stood at the gate with my shovel. I yelled at them and they stopped.”