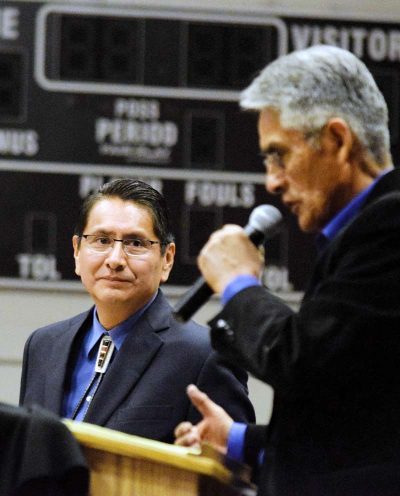 Spectators at the first debate between the candidates for Navajo Nation president saw a different side of Joe Shirley Jr. Tuesday night.

The man who up to now has worn the mantle of “elder statesman” (his own words at a recent rally) went on the attack.

Shirley lashed out at his opponent, current Vice President Jonathan Nez, accusing him of going against Navajo tradition, running marathons for his own aggrandizement while neglecting the problems of the Navajo Nation, and stealing money.

For the most part, Nez did not take the bait, saying he wasn’t going to “play this old politics game,” but he did get in a few digs of his own.

When Shirley said he picked his running mate, Buu Nygren, because he was the most qualified of all the people he was considering, Nez shot back, “Let’s set the record straight. Buu was the second-most qualified,” referring to the fact that Shirley was forced to choose again after his first pick, Peter Deswood III, was disqualified for not being a registered voter.