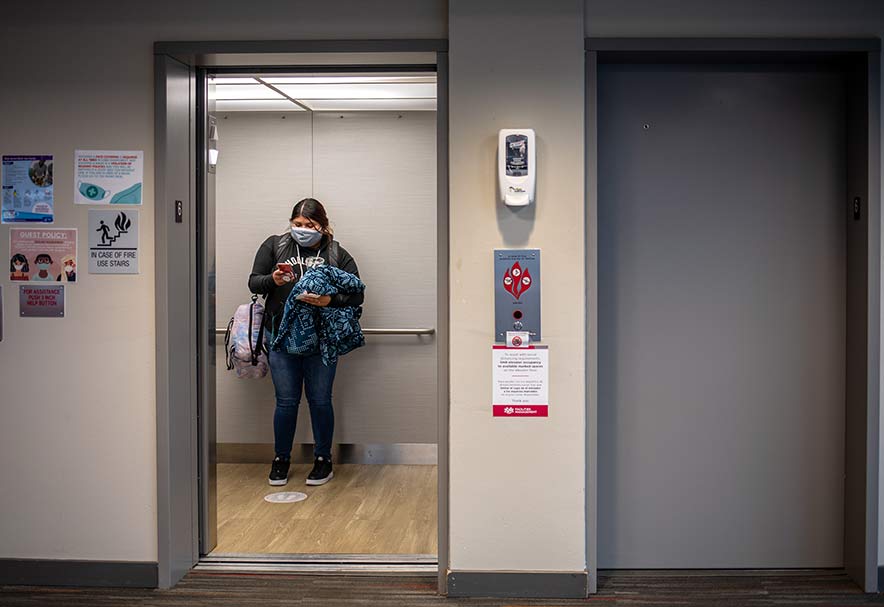 Navajo Times | Sharon Chischilly
University of New Mexico student Deianira Mason gazes at her phone while waiting in an elevator at the Lobo Rainforest student apartments in Albuquerque. Mason is heading back home to the Navajo Nation since the tribe’s agreement with UNM for the building expires in July.

COVID-19 social distancing requirements have made the Navajo Nation’s agreement with the University of New Mexico to rent two floors of the Lobo Rainforest residence hall unfeasible, President Jonathan Nez said in a written statement Tuesday.

The agreement, which expires July 31, will not be renewed, although Nez said he would be open to a similar deal after the pandemic has passed.

The housing deal was struck by the Russell Begay administration in 2018 and allowed the Nation to rent the fifth and sixth floors of the apartment building for use exclusively by Navajo students. The idea was not only to offer a subsidized housing option (students pay $945 per fall or spring semester, $378 per summer — less than half the regular rate) but to allow Diné students, who sometimes struggle with fitting in at college, to create a supportive community. By all accounts, it worked.

“I can’t even stress how important it was for me to live here,” said Rainforest resident Caudilina Roer, 21, a senior majoring in criminology and art. “My grades, my social life — everything would have been different if I didn’t live here.”

“For one thing, it’s nice not living in a dorm named after a conquistador,” added Eli Antonio, a 27-year-old graduate student, who started his college career in Coronado Hall. “I avoided the main entrance just because I didn’t want to look at the mural of Coronado coming to New Mexico. I don’t think most Americans have any idea how that makes a Native person feel.”

Also, “it’s just inspirational seeing all these young Navajos walking around,” he added. “It’s like, ‘I see you, you see me, we’re out here.’

“You can find community (with other Navajos) when you live on campus,” he said, “but you have to actively go out and search for it.”

Since the Rainforest is an apartment building rather than a dorm, “it makes you feel like an adult instead of like being back in BIE boarding school,” quipped Antonio, who is from Whitehorse, New Mexico.

“It’s really quite spacious, and you’re not sharing a room with five other people,” said Roer, who is from the Rio Rancho area with roots in Eastern Agency. “You have your own kitchen, and even a dishwasher and washer and dryer.”

The spaciousness, as it turned out, was the Rainforest’s downfall. “In the latter part of spring 2020, we were informed that a number of Navajo students were required to immediately evacuate the dorms due to the outbreak of COVID-19,” Nez explained. “In order to help enforce social distancing, we were informed that UNM would limit each dorm room to one student. “This drastically reduced the number of students that would benefit from the housing agreement,” he said, “considering that we obligated at least $1.5 million (for the three-year contract).”

Nez noted that other than the financial considerations, he completely supports the idea of a Navajo dorm. “As vice president at the time (the contract was implemented), I fully supported the initiative and I visited the students on several occasions to support them,” he said. The university also supports the project.

“We would love to continue with the agreement and continue to house that population of students,” Thomas M. Neale, director of real estate at UNM, told the campus newspaper, the Daily Lobo.

Both Antonio and Roer are near the end of their college careers and were planning to move out soon anyway. “If I push it, I can graduate in May,” Roer said. Antonio already earned his master’s degree in secondary education, but was hoping to stay on and take a few more classes while he figured out his next step.

Neither wants to move back in with their families. “My parents aren’t in a position where they can house me right now,” said Roer. Antonio is afraid of bringing COVID-19 back to his parents if he goes back to Whitehorse. “If I live there, I have to drive out of town every time I need internet,” he said.

Still, they acknowledged they’re in a better spot than the younger students. “Some of these students have jobs here,” said Antonio. “They’ve created lives here in Albuquerque around their education. If they go back to the rez, they don’t have good internet, they won’t be able to get to class when the roads are muddy … all the problems they had with their education in grade school and high school will still be with them in college.”

“I’m just sad for them they won’t be able to have the experience I had,” added Roer.

Nez said that even though the Rainforest option won’t be there for a while, his administration takes education seriously and will continue to support students in other ways.

“I want to point out that when the Navajo Nation received CARES Act funds, our administration put forth a proposal to provide $35 million for college students,” he said in the statement.

“Unfortunately, when this proposal went before the Council, it was amended and the $35 million was removed from the legislation,” he said. “Had this funding been approved, it would have provided financial relief for students including those who resided at the Rainforest dormitory.

“In addition, our administration put forth a separate proposal to set aside $50 million from the Síhasin Fund to establish an endowment to provide more scholarship opportunities for the long term,” Nez said. “Unfortunately, that proposal did not receive a final vote from the Council, but we are going to continue to pursue this initiative this year and we hope to receive the full support of our lawmakers.”