The daughter and wife of a deceased resident of the Winslow Campus of Care reached out to the Navajo Times on Jan. 28 saying they were not notified that their father/husband, Mr. Yazzie, had tested positive for COVID-19 until two weeks after the fact when the nursing home needed their permission to transfer him to the emergency room. They believe that delay might have cost him his life.

The nursing home disputes their claim.

This past Monday, the 77-year-old resident, who succumbed to the virus on Jan. 12, was finally laid to rest. The family asked to keep their first names anonymous because they are in mourning and want their privacy respected. “It’s kind of hard to talk about it,” said a tearful Mrs. Yazzie. “I love my husband. I don’t feel good. I think about him every day.” 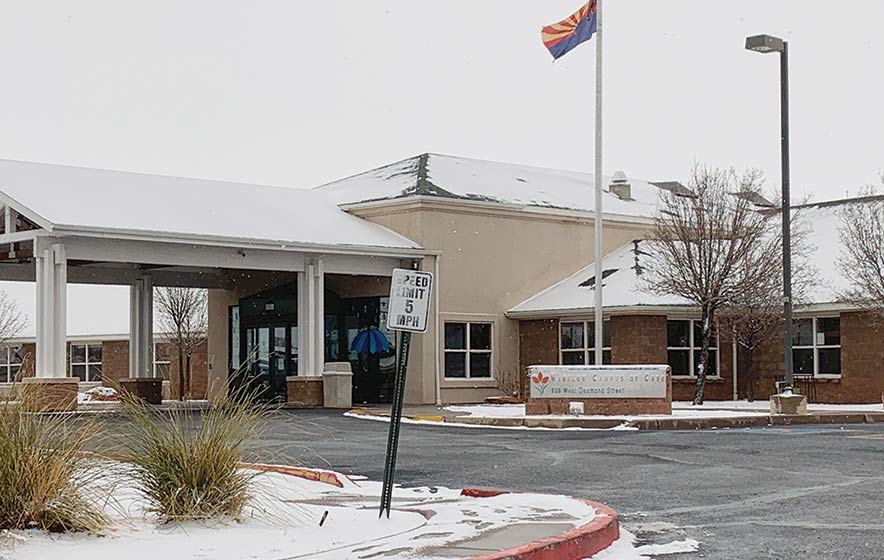 Submitted
“Mr. Yazzie” (first name withheld to protect his privacy) died of COVID-19 he contracted at this Winslow nursing home. His family says they weren’t told he had contracted the coronavirus until two weeks later. The nursing home disputes that.

“The last month has been a roller-coaster,” said Mr. Yazzie’s daughter, Mrs. Begay. “We still can’t believe it. It’s finally going to be real since we’re having his funeral.” Begay and her mother said that it was through the article “COVID-19 outbreak at Winslow nursing home claimed 40 lives,” published in the Navajo Times last week, that they learned the extent of the outbreak and how many residents and staff were impacted.

According to WCC Administrator Dan Belisle, 97 out of 102 residents tested positive along with about 50 staff from Nov. 30 to Dec. 25. “I thought it was just us that was suffering and lost a family member,” said Mrs. Yazzie. “Here there’s a lot. They didn’t tell us. They didn’t let us know.”

Begay and Mrs. Yazzie wanted to share their story because they believe not only were they not informed but they were lied to by WCC staff. And they are concerned about other residents and families who may have suffered. “All those people that died in there,” said Mrs. Yazzie. “All those ones that didn’t have a family or had nobody to talk to, they just suffered all by themselves.”

The Center for Medicare and Medicaid Services policies, which Belisle said the WCC adheres to, mandate that nursing homes inform residents and families of all COVID-19 cases. “They didn’t follow protocol,” said Begay. “We put our trust in them, thinking they were going to watch over him.”

‘They didn’t tell us’

In an email on Tuesday, Belisle said “all responsible parties” were notified of COVID-19 cases of their family members by telephone. “Many did not answer and other phones were not in service,” he said. In those cases follow-up calls were made, he said. Belisle also said the Navajo County Health Department was promptly informed of all cases, but he had “no information” on what contact tracing they might have been done.

On Dec. 4, Begay said the WCC had called to let her family know that one employee had tested positive for COVID-19 and they were going to test “everyone” in the facility. However, WCC never followed up to let them know of any results. “They only told us that the front desk secretary is the one who got sick,” said Begay. “They didn’t say anything about the other employees or residents.”

In the meantime, Mrs. Yazzie and Begay continued regular phone calls with Mr. Yazzie, checking up on him at the WCC to make sure he was all right. Each time they called the staff told them he was “fine,” they said. “They didn’t tell us anything,” said Begay. “They were hiding it that whole time. They were just saying he was fine and there was nothing wrong with him.”

When he started complaining about losing his voice and a cough, his wife and daughter started pressing the nursing home staff, but again they said he was not sick. “I was so happy he did not catch it, but it wasn’t true,” said Mrs. Yazzie. “They didn’t tell me the truth even though we kept asking. They lied to me all that time.”

Then on Dec. 22, Begay received a call from the WCC saying that they needed to send Mr. Yazzie to the emergency room at Little Colorado Medical Center because his oxygen was low. “I called and asked the Winslow Campus of Care, ‘What’s wrong, what’s going on? Last time we called you said he was fine,’” said Begay. That was when she learned that her father had tested positive for COVID-19 on Dec. 7.

“I said, ‘What? You guys didn’t let us know!’” said Begay. However, the WCC staff denied that and claimed that they had informed the family that he had tested positive prior. Mr. Yazzie was admitted to the LCMC hospital where he stayed for five days.

By this time he had developed pneumonia and was put on oxygen treatment. Begay said she asked LCMC staff if they had put him on antibiotics and they said no. “They just said he was having regular complications from COVID,” she said. “They didn’t tell us any specifics.” The LCMC kept her dad at the hospital for five days. When his oxygen levels stabilized, LCMC let him return to Winslow Campus of Care, much to her surprise.

“Little Colorado said he was doing OK,” said Begay. She said her father was still COVID-19 positive and the WCC had separated the COVID-19 positive patients from the other residents in the facility. However, after two days at WCC, they sent Mr. Yazzie back to the LCMC emergency room on Dec. 28, where his condition deteriorated. “They told us he maxed out his oxygen,” said Begay.

The LCMC informed the family that if they wanted him to be intubated, he would have to be sent to another medical facility. “When they told us he was going to get sent out, I went straight over there,” said Begay, who had gotten her first COVID-19 vaccine shot. “I signed a waiver at the hospital and I went in, and I was with him. We did a video chat with the family.”

Then he was transported by air to Scottsdale, Arizona. “I was able to say my goodbyes and let him know that he would be OK,” said the daughter. At HonorHealth Scottsdale Osborn Medical, Mr. Yazzie was intubated and within two days his ventilator usage was up to 75% and his condition continued to worsen.

“On Jan. 12 they called us and said he maxed out the ventilator and they put him on his stomach but it didn’t help,” said Begay. “They asked us if we wanted to take him off because they said he’s just living off the ventilator right now.”

Because Mr. Yazzie’s wife and daughter believed he was suffering and in pain they reluctantly agreed to take him off the ventilator. “We just made that decision,” said Begay. “They put him on palliative care and gave him meds so he doesn’t feel anything.” Later that day, they got the call that their loved one had passed away. “They took him off the ventilator and he only lasted 40 minutes,” said Begay.

In retrospect, Begay, who also works in the medical field, believes it is possible that if her father had received intervention and had been sent to the hospital earlier in his COVID-19 diagnosis, he might have survived. “The nurses there are supposed to be watching over him, taking his vitals, watching his O2 levels,” she said. “If they did that earlier, maybe it would have been a different story.”

She said while her dad had suffered a minor stroke in the past, which caused a slight brain injury and impacted his ability to walk, he was otherwise healthy. “He didn’t have any major health conditions,” she said. “He was healthy his whole life.”

Instead, she believes the WCC tried to cover up the severity of the outbreak. “I think they should have been clear and honest with us,” she said. “All they said was he was just fine. That’s what they kept telling us.”

Begay said, as health care providers, the WCC staff should have known the first five to eight days of COVID-19 onset are critical and if patients start to have oxygen deficiency they should be transferred to the hospital right away. “They should have taken very close care of everyone that was there in those early days,” she said.

She can’t help but think about the other residents who were affected who couldn’t speak for themselves. “I wonder if they just died in pain with no one to talk with them, or watch over them, or fight for them like we did for our dad,” said Begay.