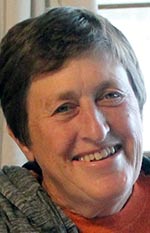 In Paula’s own words, she was a writer, gardener and storyteller. Hopelessly optimistic, she was all of these things and so much more. Before we could comprehend that this beautiful soul was ill, she was taken from us, succumbing to a previously undiagnosed, aggressive form of cancer on Nov. 29, 2019, at the University of New Mexico Hospital in Albuquerque.

Paula was the second of four daughters, born to Marian and George Enyeart, in Bismarck, North Dakota, on Aug. 13, 1959.

Paula spent most of her childhood on the shores of Lake Audubon in rural Garrison. She loved the outdoors and appreciated all four seasons of recreation on the lake. Family camping and backpacking trips in Montana also left lasting impressions that she shared with so many others later in life.

As a teenager, Paula was fortunate to belong to the Congo Teens youth group at the First Congregational UCC Church in Garrison. Many values instilled there remained with her as she grew into her life of service.

Paula began working as a nurse’s aide in the Garrison Hospital while still in high school, graduating from Garrison High School in 1977. She went on to earn her nursing degree from the University of North Dakota in 1982, spending time on the Pine Ridge Reservation in South Dakota along the way.

From there, Paula joined the Peace Corps and spent three years serving the indigenous people high in the Andes Mountains above Quito, Ecuador. We were all so proud to see her photo included in a feature story in the Smithsonian magazine. Many years later, Paula published her Peace Corps experiences in a book titled “Squished Potatoes.”

Upon returning stateside, Paula went back to school and earned her nurse practitioner degree from Yale University in 1989. After graduation, she spent several years on the East Coast working with immigrants residing on the Delmarva Peninsula.

From there, Paula moved to Cuba, where she quickly felt at home among the Navajo people. She worked for the local clinic and served as the school nurse prior to branching out on her own as “Paula’s Practice.” In this endeavor, she broadly served the rural population in several locations, practicing both traditional and homeopathic medicine.

Paula was active in 4H as a youth and credited the program for many of her life skills. She couldn’t wait to become involved with the Sandoval County 4H program in New Mexico — and involved she became.

Paula served 20 years as a 4H club leader, spent 12 years on the fair board (most recently serving as president), and was inducted into the 4H Hall of Fame in 2007. Her creative means for transporting kids to 4H meetings, camp and the county fair are legendary – no one was ever left behind. She was in the process of writing a book about recent 4H experiences and plans are underway to complete this project on her behalf.

Preceding Paula in death are her grandparents, aunts, uncles, cousins, brother-in-law Dan Gilbertson, close friends and dear pets. We can only imagine their Heavenly reunion.

We would like to thank the University of New Mexico Hospital, the UNM Department of Anthropology/Maxwell Museum of Anthropology and Casa Esperanza for their loving care of Paula and her family. Continuing to serve until the very end, Paula donated her earthly body to science.

The family also cannot thank enough the people of the Village of Cuba, and the surrounding communities. You embraced Paula as family from the beginning and gave her a beautiful memorial service to celebrate her inspirational life.

Special thanks goes to the Torreon Wolfpack 4H Club. Paula was so proud of each and every one of you and loved all of you as her own.

In remembrance of Paula, take time each day to enjoy the simple pleasures in life, have faith and spend less time worrying — and always find compassion for others.

Paula was a strong advocate for free and accessible health care for all. Please learn about the candidates and vote.

Roger graduated from Sherman Indian School and continued his education at a trade school for welding in Anaheim, California. He completed trade school and then got drafted in the Vietnam War.

Roger was employed as an ironworker for Local 75. He enjoyed family, leather crafts, welding, boxing, working on cars and telling jokes.

Roger is preceded in death by his family members.

A reception will take place at the Wide Ruins Chapter House, following service.

Abel Funeral Services is in charge of arrangements.

Ronald attended Chinle High School and Brigham Young University. He was a member of a performing group then known as the Lamanite Generation (now Living Legends).

Ronald made and became a flute player under the apprenticeship of Doc Tate Nevaquaya, Comanche flutist/artist, while attending BYU. He was also a guitarist/singer. He retired in 2017.