Rogers waves aside bad luck, sets sights on next round 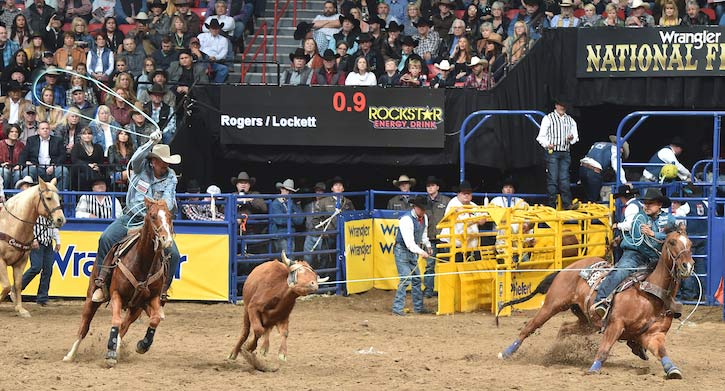 The top 15 team ropers in the PRCA ranks are in Las Vegas and Diné cowboy Erich Rogers is happy to be one of them.

Rogers came into the Wrangler National Finals Rodeo No. 13 in the world, which earned him his ninth NFR qualification.

“It’s always a blessing to come back here,” Rogers said on Thursday night at the Thomas & Mack Center, home of the NFR. “You can never take things for granted. There are hundreds of other guys out there in the rodeo world who would do anything to get here so I feel really blessed.”

With Bray not making it, Rogers was paired up with heeler Kyle Lockett at this year’s NFR. Unfortunately, the two ropers haven’t had the best of luck. Heading into tonight’s ninth performance the duo have only placed in two rounds with their best finish coming in the first round when they placed third with a 4.3 run.

“Kyle has been here several other times and he’s always done really good but we haven’t drawn the best steers in the herd,” Rogers said. “We also haven’t capitalized on the ones we wanted to capitalize on.”

Such was the case in Thursday night’s performance. Rogers said he got off to a good start but when he nodded the steer stumbled out of the gates as he broke the barrier.

“He was supposed to be a strong and good steer but his horns got hung up in the chutes,” said Rogers. “I made my move but I just didn’t do a good job of scoring him.”

That infraction cost them a 10-second penalty as they finished with a 14.1 run, which placed them 13th overall.

Of the eight performances, the pair has had four rounds with penalties, and in two others they have recorded no times.

With an average check unworkable, Rogers is hoping that they can capitalize on their chances in the next two rounds starting with tonight’s performance.