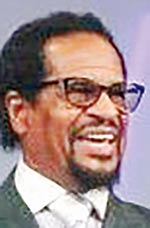 Pastor Ford was born Sept. 2, 1945, in Kanawha County, West Virginia, son of the late Betty Ford Bell and George Ford. Pastor Ford went home to be with the Lord on March 24, 2021, surrounded by his loving family.

After Pastor Ford retired from the Sears Roebuck Company, he then started a very successful painting business that he owned and operated for many years in Columbus, Ohio.

Pastor Ford was an avid athlete and sports fan. His sports of choice were golf, basketball, football, racquetball, baseball, softball, bowling, and horseshoes. Actually, there wasn’t a sport that he couldn’t compete in and didn’t enjoy.

In spite of his many accolades in the sports arena, Pastor Ford’s greatest accomplishment was when he answered the call of God to move to the Four Corners area in 1996 to preach the gospel of Jesus Christ to the Native American community and beyond. This is when he became the founding and senior pastor of Word of Life Christian Center.

Over these past 25 years of ministry, Pastor Ford has had the opportunity to travel throughout the Navajo Nation, multiple other Native American reservations, Africa, Canada, and many states here in the U.S.

In addition to all of this, one of Pastor Ford’s greatest desires was to continue taking the message of Christ all over the world. Even though he wasn’t able to physically travel to many desired destinations, he was able to reach people all over the world from the platform God gave him at Word of Life Christian Center through the power of live-stream.

Over the last several months of his life, Pastor Ford reached as many as 40 countries and 37 states within the U.S. During this time he was a part of countless lives being changed, as he led men, women, and children to accept Jesus as their Lord and Savior. He would always say, “I’m about souls.”

Pastor Ford’s larger-than-life personality and inviting smile would change the atmosphere in any and every room he walked into. His love for God was the source that allowed him to love others unconditionally, and to always see their potential, instead of any shortcomings or labels society may have placed on them. He was loved by many and will be missed by all.

In lieu of flowers, donations may be made to the Word of Life Christian Center to help see the legacy of Pastor Ford carried on.

FORT DEFIANCE — Funeral services for Oscar Lee House Sr., 87, will be held Friday, April 9, at 1 p.m., at the Good Shepherd Mission in Fort Defiance, with Rev. Cathlena Plummer officiating. Burial will follow at the Desert View Cemetery in Winslow, Arizona.