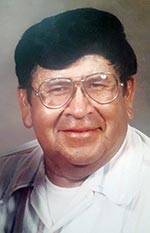 CROWNPOINT – Funeral services for Paul C. Thomas, 81, of Crownpoint, will be held today, Aug. 3, at 11 a.m. at the Gospel Lighthouse Church in Crownpoint, with Rev. Carlos Baki officiating. Burial will follow at the family plot in Two Red Hills (?ich’’ Sinil’).

Paul was a kind, loving, compassionate family man as well as a devout Christian. He was raised in the Crownpoint/Standing Rock area. He worked various jobs as a community health worker, teacher, police officer, security officer and school bus driver. He enjoyed spending time with his grandchildren and great-grandchildren, ranching, reading his bible, and watching football games.

A reception will take place at the Becenti Chapter House following services.

GALLUP – Funeral services for Stanley Etsitty, 62, were held July 29 at Rollie Mortuary in Gallup. Interment followed at the family plot in Chichiltah, N.M.

Stanley graduated from Logan High School in 1973 in Logan, Utah, and was employed as a master carpenter. He worked for numerous outfits and eventually ran his own construction company.

Stanley was an avid modern-day mountain man who loved hunting, fishing and camping. He believed in staying physically fit by running, lifting weights, exercising, and always believed in the power of positive thinking. His passion was rodeo, which took him throughout the western U.S. and Upper Canada, riding broncs and bulls. He held memberships in the PRCA and other associations.

After retiring, Stanley ranched for the remainder of his life and loved being a grandpa to his nine grandchildren.

Stanley is preceded in death by his mother, Louise J. Benally; and father, Stanley Etsitty.

CHINLE – Al, as his friends and grieving family members refer to him, was remembered for his infectious smile and sense of humor. He was equally noted for his work ethic and his ability to resolve Information Technology issues experienced by his co-workers. He enjoyed more than anything going hiking throughout Arizona and would be always taking photographs and showing them off.

As members of the Navajo Nation, the family moved back to the Navajo Reservation where Al and his siblings attended Chinle Elementary School. Al and Wil graduated from Chinle High School in 1972. Both were recognized as accomplished musicians and earned All-Star Band Honors for multiple years. Al began on the tenor saxophone and eventually settled on the baritone horn, which became his instrument of choice. Through their high school career, Al and Wil could be heard throughout their home playing their instruments and entertaining the family with their abilities.

Al initially attended the University of Arizona in Tucson, but transferred to Northern Arizona University in Flagstaff, where he graduated with a bachelor’s degree in psychology. During his college career, Al was a member of the Northern Arizona University Lumberjack Marching band. In addition, he participated as a member of the Navajo Nation Marching Band, which performed at the major Navajo Nation events and festivities.

Al continued his education by attending Muir Technical College with a certificate in computer programming, which he used to pursue professionally with multiple Phoenix companies and most recently with the Arizona state government.

Al converted to Judaism in 2011 and was an active member of the Phoenix Jewish community. His burial service will honor his converted faith. A graveside service was held July 20 at the Chinle community cemetery.